According to the FBI, violent crime includes murder, nonnegligent manslaughter, rape, robbery and aggravated assault. In some cases, the cities with the highest violent crime rate, including Flint and Oakland, had high rates in all four categories. However, most of the most violent cities tend to do very poorly only in a few categories. Based on the FBI Uniform Crime Report, these are the 10 most dangerous cities in America.
Crime in these cities is typically not limited to just violent crime. Three cities — Birmingham, St. Louis and Oakland — were among the 10 worst cities in the nation for both violent crime and property crime. In some of the most dangerous cities, specific types of property crime were especially common. Flint and Cleveland had among the highest burglary rates, while Oakland, Detroit and St. Louis had among the highest rates of vehicle theft.
The economies of many of the most dangerous cities have been in bad shape for years, in some cases long before the Great Recession. The populations of many of the most dangerous cities declined, leaving behind highly impoverished urban centers. The loss of economic diversity, explained John Roman, senior fellow at the Urban institute, only serves to exacerbate crime in cities like Detroit, Flint, Cleveland and St. Louis.
In fact, all the 10 most dangerous cities had poverty rates above the national rate of 15.9% in 2011. In half of these cities, more than 30% of the population lived in poverty. Detroit and Flint had poverty rates of more than 40%. “It is very clear that poverty in particular is associated with higher crime rates,” explained Roman.
However, the relationship between the two is less certain. It is “very difficult to say whether crime makes places poorer, or poverty causes more crime,” Roman noted.
In many of the nation’s most dangerous cities, unemployment is also extremely high. Seven of the 10 cities with the highest levels of violent crime had unemployment rates above 10% in 2012, much higher than the national unemployment rate of 8.1% that year. In two cities, Detroit and Stockton, the unemployment rate was more than 18% last year.
Low educational attainment also goes hand-in-hand with high crime rates. In all of the 10 most dangerous cities, the percentage of adults with a high school diploma was below the 86% national average. In five of these metro areas, the percentage of adults with a diploma was below 80%.
On its website, the FBI instructs readers to avoid comparing city violence because rankings tend to be simplistic and ignore factors that influence crime, as well as the different ways crimes are measured and reported. For this reason, Roman cautioned against directly comparing cities based on their individual crime rates. However, because the cities with the highest and lowest violent crime rates have remained consistent for many years, he believes comparing city ranks was useful.
Based on the FBI’s Preliminary Annual Uniform Crime Report, 24/7 Wall St. identified the 10 U.S. cities with populations of 100,000 or more with the highest rates of violent crime per 100,000 residents. Using estimated populations and crime incidents from the FBI, which measures incidents of eight types of violent and nonviolent crime for 2012, 24/7 Wall St. calculated the incidence of the four types of violent crime per 100,000 persons for that year: murder, forcible rape, robbery and aggravated assault. In addition to crime data, 24/7 Wall St. reviewed median income and poverty rates for these cities from the U.S. Census Bureau’s American Community Survey for 2011, the most recent available year. We also included average 2012 unemployment rates for these cities from the Bureau of Labor Statistics. 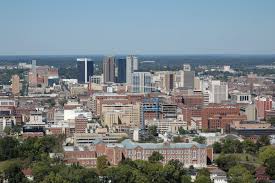 10. Cleveland, Ohio
> Violent crimes per 100,000: 1,383.8
> Population: 393,781
> 2012 murders: 84
> Poverty rate: 34.3%
> Pct. of adults with high school degree: 77.0%
More than 825 robberies were reported in Cleveland for every 100,000 residents last year, the second highest robbery rate in the nation behind only Oakland. The total number of robberies in the city rose from 3,156 in 2011 to 3,252 in 2012. Cleveland also had the nation’s second highest burglary rate in 2012, with close to 2,500 burglaries per 100,000 residents. Unlike robbery, burglary does not involve force or coercion and is not considered a violent crime. Recently, the highly publicized discovery of three area women that had been missing for roughly a decade and held captive within the city led to extensive criticism of the Cleveland Police Department. Cleveland is one of the nation’s poorest large cities with a median household income of just $25,731 in 2011 — barely over half the national median.

1. Flint, Mich.
> Violent crimes per 100,000: 2,729.5
> Population: 101,632
> 2012 murders: 63
> Poverty rate: 40.6%
> Pct. of adults with high school degree: 82.9%
With a staggering 2,729.5 violent crimes per 100,000 residents, no city had a higher violent crime rate than Flint. The city of just 101,632 people had 63 total murders and 1,930 aggravated assaults, both the highest relative to the city’s population. Flint also had nationwide highs in burglary rates and arson per 100,000 people. The sheriff of Genesee County, where Flint is located, proposed a plan to create a violent crime mobile response unit that would cost $3 million. However, Governor Rick Snyder rejected the plan because he believed resources would be better “integrated into the ongoing efforts to make Flint safer.” Like Detroit, Flint has suffered economically in recent years. The median household income was just $23,380 in 2011, the second-lowest of all 555 cities measured by the U.S. Census Bureau.