Global Black Community News
May 7, 2013 Ro Ho 0 Comments
By Angel Jennings, Andrew Blankstein and Rosanna Xia, Los Angeles Times    May 7, 2013
The Los Angeles Police Department opened an internal investigation into its response at an off-campus house party near USC amid complaints from some students that the department showed racial bias and used heavy-handed tactics.
The incident occurred early Saturday morning during an end-of-semester party at a house a few blocks from campus. A neighbor called police complaining about the noise. Officers arrived, and the situation escalated with the arrival of dozens more officers donning riot gear. Six people were arrested and one officer was injured. Two of those arrested were “treated for minor abrasions,” police said.
The clash roiled the USC campus Monday, prompting a student sit-in at the center of campus.
“They were acting like they were going to war with us,” said senior Jason Sneed, 23, a political science major. Sneed, who described the scene as chaotic and hostile, said he was handcuffed and thrown inside the back of a police car. 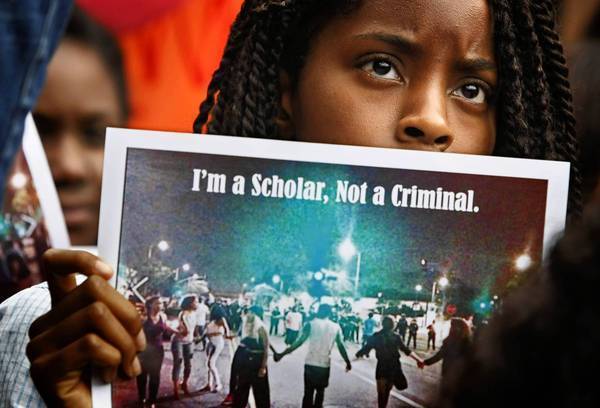 Folasade Aremu, a freshman economics major, holds a photograph during a sit-in on the campus of USC to protest the way police responded to a a weekend party near campus. (Don Bartletti / Los Angeles Times / May 6, 2013)


This incident comes after two violent events that shook the USC community in the last year and were followed by tighter security measures in the area. In April 2012, two graduate students were shot to death in a botched robbery less than a mile from campus. In October, four people were shot, one of them critically injured, outside an on-campus Halloweenparty.
The LAPD said it is investigating partygoers’ complaints but defended the officers’ actions.
The officers responded to complaints about a loud party in the area of West 23rd and Hoover streets shortly after 2 a.m. Saturday. They found two parties going on. One was attended by a mostly white crowd and the other was attended largely by African Americans, students said.
Police spoke to the organizer of the party attended by African Americans, who said he would lower the music and shut down the party.
Police then went to the party across the street, which started shutting down, Lt. Andy Neiman said.
“During that time, party one started up again. We went back to party one, having warned the organizer,” Neiman said. “We went to cite the organizer and while we were trying to talk to him out front and cite him, another partygoer tried to intervene.”
Other partygoers started pelting officers with debris, authorities said. Additional police responded to an “officer needs help” call. Security from USC’s department of public safety also arrived.
“It was a party that got out of control, people were throwing things at the police, so we donned protective gear,” Neiman said.
Neiman said officers used force on one partygoer because he resisted arrest. He was arrested on suspicion of felony interfering with the work of police officers. Four others were arrested on suspicion of failing to disperse, and another was arrested on misdemeanor interference. All six were released over the weekend, officials said.
Attendees of both parties took to social media, posting videos of the confrontation and personal accounts of what they perceived to be racial profiling by law enforcement. They noted what they saw as a stark contrast between how police responded to the two parties.
John Thomas, chief of USC’s department of public safety, said his agency is “in constant communication with senior officers at the LAPD as they discuss solutions to ensure that the response of LAPD to complaints about student parties is properly calibrated.”
“The Los Angeles Police Department has taken a necessary first step by starting an investigation into Saturday morning’s events,” Thomas said.
On a rainy Monday afternoon, more than 100 students gathered in protest on the steps of the Tommy Trojan statue. They held signs that read “Stop Criminalizing Us” while others chanted “Create your own world.” Many of the protesters were black, but they were joined by classmates of other races.
“They definitely harassed the wrong students,” said Teremy Jackson, 19, a sophomore neuroscience major. “We are scholars and high-achieving students. . . . We didn’t do anything wrong.”
Michael Jackson, vice president of USC student affairs, said he has heard from many students who were upset over the incident. “We understand their concern and are working closely with them, and commit ourselves to doing all we can to ensure respectful treatment of students at peaceful social gatherings,” he said.
The LAPD, the chief of USC’s public safety department and student representatives will hold an open forum Tuesday to discuss the issues raised by the incident.