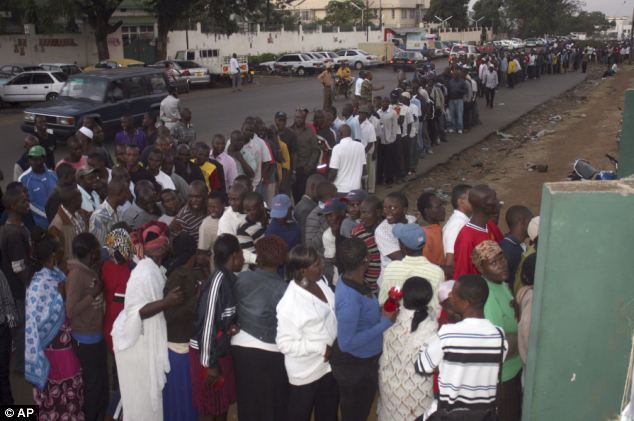 Voting early: Kenyans line up in Kisumu, west of Nairobi, five years after more than 1,000 people were killed in election-related violence 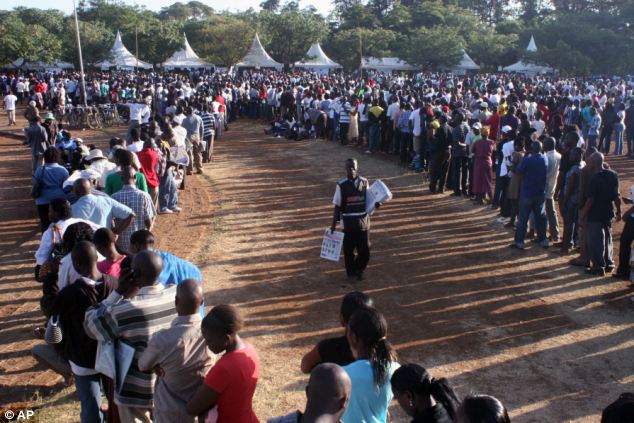 Desperate to vote: Despite widespread violence following the last election five years ago thousands queued before dawn to cast their ballot in Nairobi

The country’s top two presidential candidates condemned the attacks. Prime Minister Raila Odinga called it a “heinous act of aggression” during a historic exercise. Deputy Prime Minister Uhuru Kenyatta said he was discouraged by the news but he was sure the security situation would be brought under control.
Authorities flew in an additional 400 police officers to Mombasa to increase security. The U.N. restricted the movement of its staff on the coast because of the violence
‘People with ill intent must be stopped by all means,’ Kimaiyo said, explaining that he directed police to use their guns to stop further loss of life, a sensitive directive given that police killed more than 400 people during the 2007-08 postelection violence.
Long lines around the country left voters frustrated in the election’s early hours. Anti-fraud fingerprint voter ID technology being used for the first time appeared to be greatly slowing the process. The technology broke down in many locations. 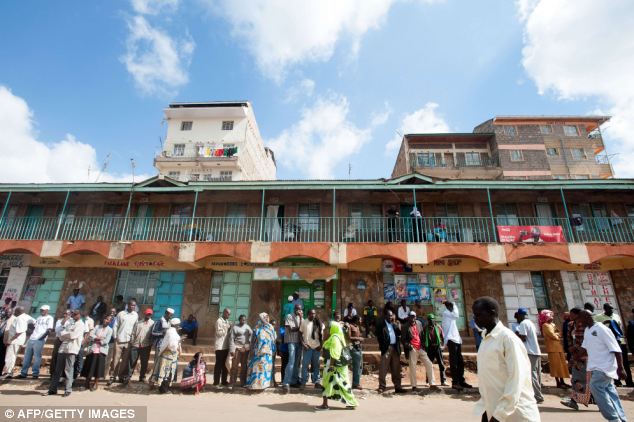 Violence: Voters queuing along a street to reach a polling station at Old Kibera Primary School in the constituency of Kibera, Nairob escaped the early morning violence 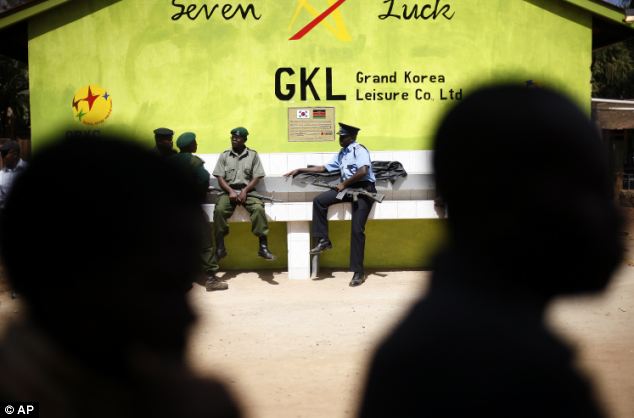 Secuirty: Police and army guard a polling station in the Kibera slum in a general election in Nairobi, Kenya

Odinga voted at an elementary school and acknowledged what he called voting challenges. He said poll workers were taking action to ‘remedy the anomalies’.
‘Never before have Kenyans turned up in such numbers,’ he said. ‘I’m sure they’re going to vote for change this election.’
Kenyatta gave a conciliatory message intended to help Kenyans accept the election outcome without violence: ‘This nation will have a president and that president will represent all Kenyans.’
The chairman of the Independent Electoral and Boundaries Commission, Ahmed Issack Hassan, urged voters not to be intimidated by the violence. But he also told poll workers that they must ensure voters don’t spend hours in line – especially the wrong line. Election officials must prevent voters from becoming agitated and leaving without voting, he said.
The country’s leaders have been working for months to reduce election-related tensions, but multiple factors make more vote violence likely. The tribes of the top two presidential candidates have a long history of tense relations, and 47 new governor races are being held, increasing the chances of electoral problems at the local level.
Perhaps most importantly, Kenyatta faces charges at the International Criminal Court for orchestrating Kenya’s 2007-08 postelection violence. If he wins, the U.S. and Europe could scale back relations with Kenya, and Kenyatta may have to spend a significant portion of his presidency at The Hague. Kenyatta’s running mate, William Ruto, also faces charges at the ICC.
Long lines began forming early across the nation. In Kibera, Nairobi’s largest slum, some 1,000 people stood in several lines at one polling station before daybreak. Voter Arthur Shakwira said he got in line at 4 a.m. but left the queue over confusion about which line to stand in.
‘We should prepare these voting areas sooner,” Shakwira said. “Confusion. All the time it’s confusion.’ 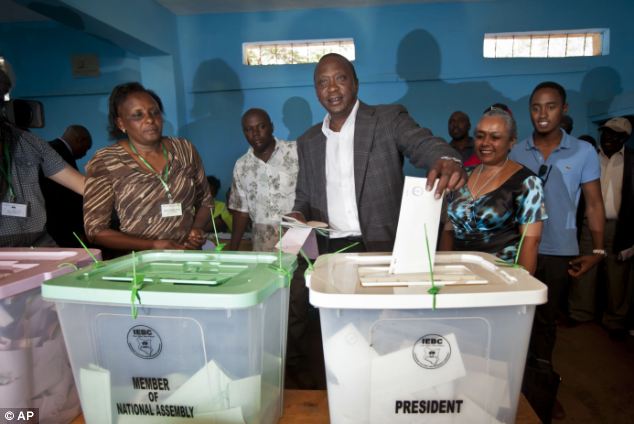 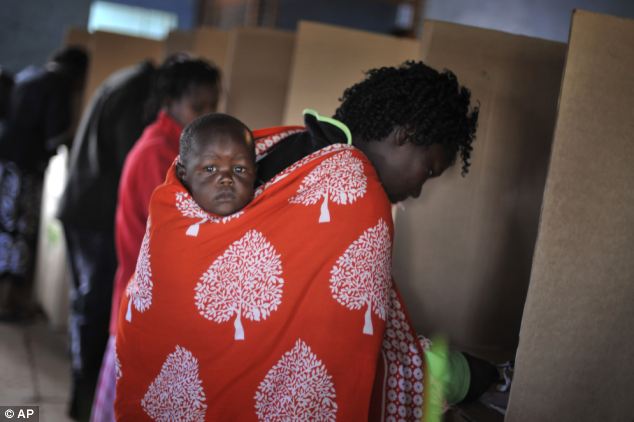 Universal voting: A Masaai woman with her baby on her back votes in a general election in Ilbissil, Kenya five years after more than 1,000 people were killed in election-related violence

An election observer from a Ugandan group called the National Consultative Council, Christopher Kibanzanga, said he was impressed by the huge turnout.
‘This can only be likened to South Africa when (President Nelson) Mandela was elected. The people have turned up in large numbers. The spirit of patriotism and nationalism has come back. I think this is a perfect process,’ Kibanzanga said.
The Kenyatta-Odinga rivalry goes back decades. Kenyatta is an ethnic Kikuyu who is the son of Kenya’s founding president. Odinga is an ethnic Luo whose father was the country’s first vice president. Polls show the two in a close race, with support for each in the mid-40-percent range. Eight candidates are running for president, making it likely the two will be forced to go to a run-off in April.
Most voters in Kibera -like Amos Achola, who said he arrived at the polling station at 2 a.m. – support Odinga.
‘I think he wins but if he doesn’t win I’ll abide by the outcome,’ Achola said. ‘The other guy is also a Kenyan. If Kenyatta wins I’ll accept it but I won’t like. But I don’t want violence.’
New technology – in part to prevent the allegations of rigging that haunted the 2007 vote – appeared to slow the voting. At the Mutomo Primary School in Gatundu, where Kenyatta is expected to cast his ballot, voting officials seemed overwhelmed by the finger-print technology. The election worker behind the computer looked nervous and sometimes scratched his head.
A late Sunday attack in the city of Garissa, near the Somali border, killed two people – a Red Cross paramedic and a driver. Officials said a candidate for parliament had been the target but was not hit.
In the weeks leading up to Monday’s vote, described by Odinga as the most consequential since independence from the British in 1963, peace activists and clerics worked to ensure the election would be peaceful despite lingering tensions.
Odinga’s acrimonious loss to President Mwai Kibaki in 2007 triggered violence that ended only after the international community stepped in. Odinga was named prime minister in a coalition government led by Kibaki, with Kenyatta named deputy prime minister.
Some 99,000 police officers will be on duty during an election in which some 14 million people are expected to vote.
Read more: http://www.dailymail.co.uk/news/article-2287773/Kenyan-elections-Twelve-killed-Kenyan-elections-hijacked-terrorists-machetes-bows-arrows-pistols.html#ixzz2McvFc0Af

Exquisitely Preserved Mummies Discovered in One of Egypt’s Largest Tombs