An Australian Rules footballer has been praised for his uncompromising reaction after a 13-year-old girl shouted out a racist remark to him during a game on Friday night.
Sydney Swans forward Adam Goodes – who is an Aboriginal Australian – was called an ‘ape’ by the girl as he ran past her and responded by turning around and pointing out the girl to security who escorted her from the Melbourne stadium.
Goodes, 33, is the star player for the Sydney Swans but said that the racial abuse he received at the hands of the girl rendered his sides win ‘meaningless’ – such was his disappointment.
Scroll down for video of the incident 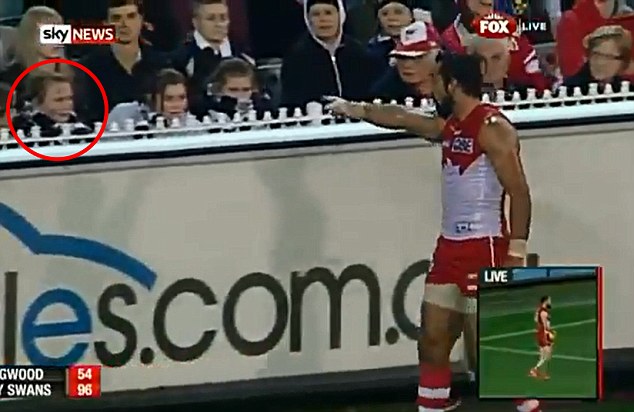 Racist: Adam Goodes points to the 13-year-old girl after she shouted ‘Ape’ at him

‘To come to the boundary line and hear a 13 year old girl call me an ‘ape’, and it’s not the first time on a footy field that I’ve been referred to as a ‘monkey’ or an ‘ape’, it was shattering,’ he told the ABC.
Goodes and the Sydney Swans were playing Collingwood, at their home of the Melbourne Cricket Ground. The 13-year-old girl was a Collingwood fan.
Police in Melbourne said that a 13-year-old girl had been interviewed over the incident, but had been released after two hours pending further inquiries.
In the aftermath of the racial abuse that was directed his way, Goodes told the Melbourne Herald Sun that, ‘Racism had a face…and it was a 13-year-old girl. – but it’s not her fault,’ said Goodes. 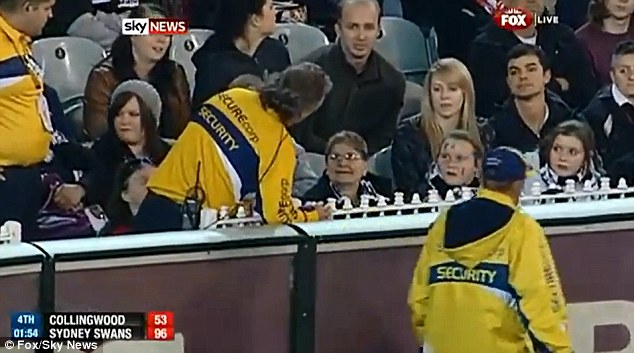 Ejected: Security officials took the girl to police after she uttered her remarks 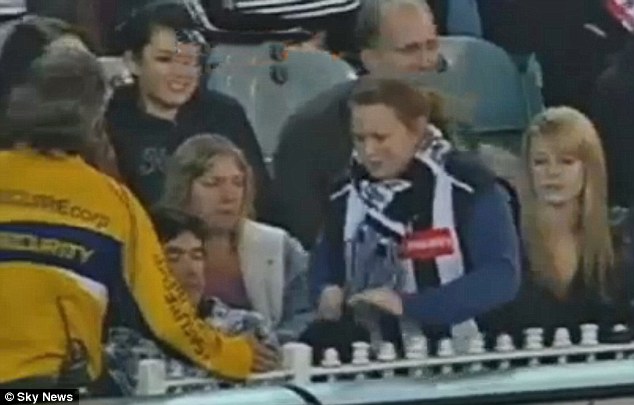 Shamed: The girl leaves her seat and is escorted out of the stadium by security 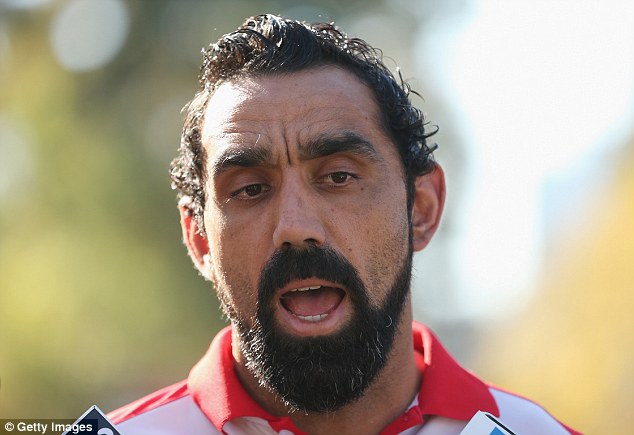 Adam Goodes of the Sydney Swans speaks to the media during an AFL press conference on May 25, 2013 in Melbourne, Australia – to address the racial abuse sent his way the previous evening

‘That’s what hurt me so bad…when I turned around, I just saw this young face and…it was just sad.
‘That’s why I had to leave the arena, it just broke my heart.’

Footie Down Under-style – A quick guide to Australian Rules Football

Early on Saturday morning, Goodes took to his Twitter feed to announce that the girl had been in touch with him, apologizing for her actions.
Speaking to the Australian Broadcasting Corporation, Goodes explained just how damaging it was for him as an Aboriginal Australian to hear her words.
‘I’ve had fantastic support over the past 24 hours,’ Goodes said.
‘I just hope that people give the 13 year old girl the same sort of support because she needs it, her family needs it, and the people around them need it,’ said Goodes to the ABC.
‘It’s not a witch-hunt, I don’t want people to go after this young girl.
‘We’ve just got to help educate society better so it doesn’t happen again.’
Goodes added that the police in Melbourne had asked him if he wanted to press charges, but that he did not want to – preferring the girl instead undergoes an education program instead.
‘It’s not her fault, she’s 13, she’s still so innocent, I don’t put any blame on her,’ he said.
‘Unfortunately it’s what she hears, in the environment she’s grown up in that has made her think that it’s OK to call people names.
‘I guarantee she has no idea right now how it makes people feel to call them an ape.’ 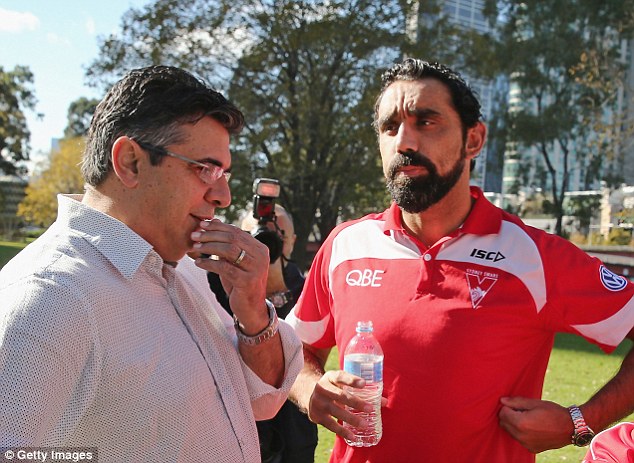 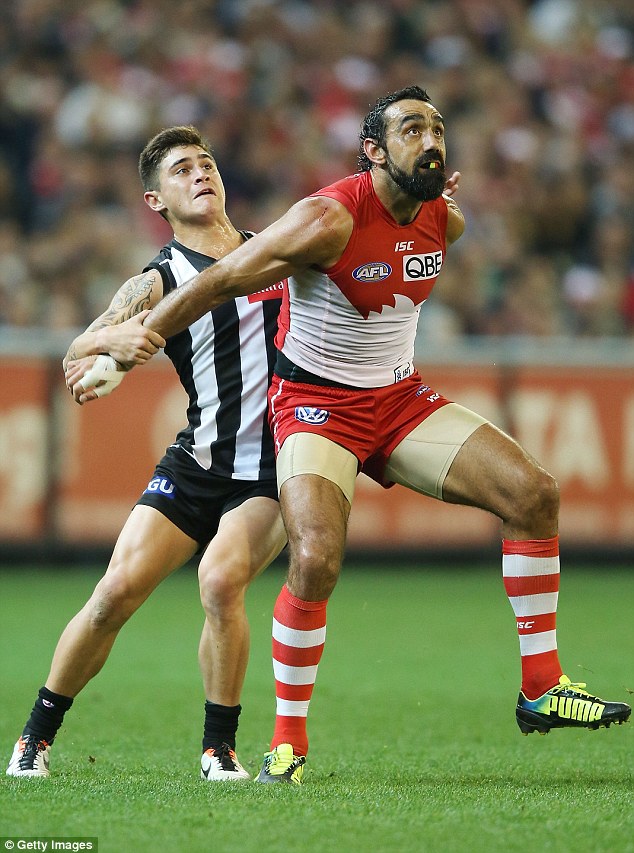 Challenge: Goodes (right) and Marley Williams of Collingwood battle for the ball

Prime Minister Julia Gillard described Goodes as ‘someone we can all look up to’.
‘His words and actions today displayed the highest levels of respect and fairness – qualities he carries on and off the field,’ she said.
‘Adam is a credit to his club, his code and the entire community.’
The girl who is not being identified told Channel 10 news she was sorry.
‘I didn’t mean it in a racist way and I’m sorry to the club and the AFL,’ she said.
Read more: http://www.dailymail.co.uk/news/article-2331441/Adam-Goodes-Moment-Aboriginal-Aussie-rules-footballer-confronted-racist-13-year-old-girl-called-ape-escorted-stand.html#ixzz2UWngyo8m