The FBI said that the shooting appeared to be ‘street violence’ and wasn’t linked to terrorism.

Hundreds of people were participating in the residential festival in the north of the city when several shots were fired.
The victims included 10 men, seven women, a boy and a girl. The children, both 10 years old, were grazed and in good condition. Police said at least two people were in surgery Sunday night. 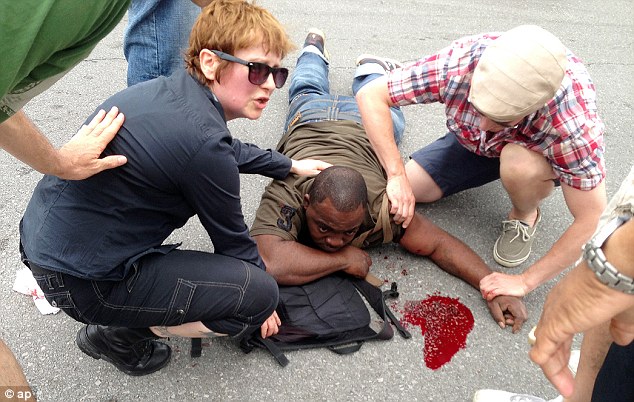 Injured: Bystanders comfort a shooting victim while awaiting EMS at the intersection of Frenchmen and N. Villere Streets after authorities say gunfire injured at least a dozen people 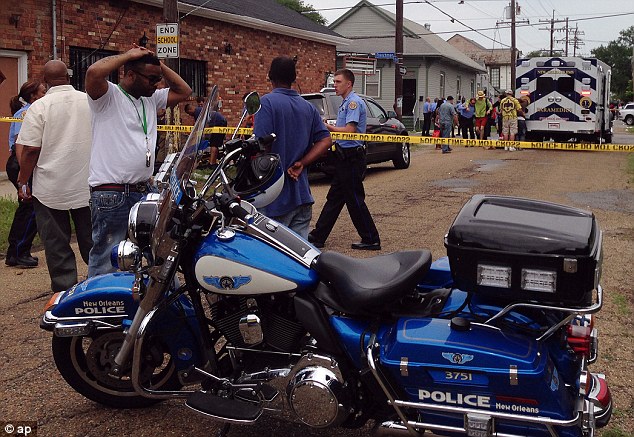 No suspects were in custody and police are still looking for leads in connection with the shooting, which took place around 2pm. Police believe there was more than one shooter 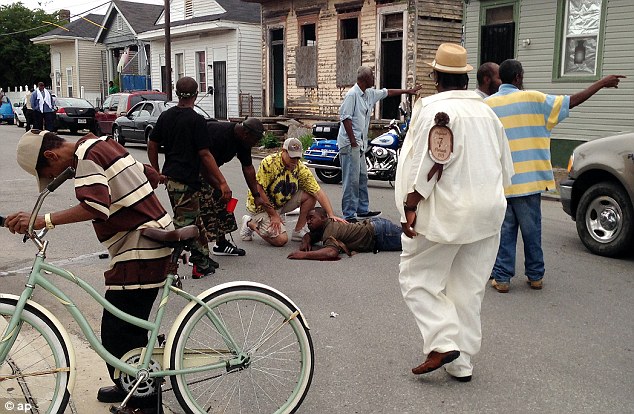 An eyewitness told WDSU: ‘Shots just started ringing out and everyone started running. Next thing I hear, ten, 15 people got shot.’
The shooting hit a ‘second line’ – a New Orleans tradition in which parade-goers typically follow a parade’s official participants.

No suspects were in custody and police are still looking for leads in connection with the shooting, which took place around 2pm. Police believe there were three shooters.

Reports say at least four people were in surgery mid-afternoon and patients had been taken to four area hospitals.

No fatalities have been confirmed, but three are reportedly in a critical condition.
The neighborhood where the shooting happened was a mix of low-income and middle-class row houses, some boarded up. As of last year, the neighborhood’s population was about 60 percent of its pre-Hurricane Katrina level.

‘Obviously, these are unusual circumstances. We have second lines that occur in the City of New Orleans virtually every weekend this time of the year.

‘It appears that these two or three people just for a reason unknown to us started shooting at towards or in the crowd. It was over in just a matter of seconds. Police were everywhere.’
Serpas said one of the shooters appeared to be a dark-skinned man, 18-22 years old, with short hair and wearing a white shirt and blue jean shorts.
Shermaine Tyler, 32, told NOLA.com: ‘Me and mom were going to the second line. I told her I didn’t want to go because there are always shots at a second line.
‘And the second I heard shots, I heard shots fired, we ran outside and one man fell in my lap who
Read more: http://www.dailymail.co.uk/news/article-2323525/BREAKING-NEWS-Twelve-people-shot-New-Orleans-Mother-Day-parade.html#ixzz2T8BBQbTx