Seth Jones probably should have wound up a basketball player. He is tall, with a great vertical leap, and his father is Popeye Jones, who played 11 years in the N.B.A. and is now an assistant coach with the Nets.

But instead, Seth Jones, 18, is projected to be a top pick in the N.H.L. draft and may be on his way to becoming hockey’s first African-American star.

“I’d be shocked myself if I heard a story like that,” Jones said, when asked if people are surprised by the combination of a basketball father and a hockey son. “Me and my two brothers all play hockey, so it was weird, I guess, that none of us played basketball.”

Jones, a 6-foot-4 defenseman with slick skating and puck-possession skills, seems to have a can’t-miss label sewn onto his hockey sweater. He will help lead the United States team at the world junior championships in Russia next week, even though he is the youngest player on the roster. He was on the team for last year’s tournament as a 17-year-old, but an injury sidelined him just before it started.

Now in his first year with the Portland Winter Hawks of the Western Hockey League, Jones has 28 points in 31 games, third among rookies, and a plus-27 mark, fourth among all players. On the ice he is a commanding presence, a hard hitter. But more often he is the rare defenseman who can control a game’s tempo with his stickhandling and passing — a “full-package defenseman,” in the words of Phil Housley, the United States coach.

Probably not what anyone expected from a son of Popeye Jones. 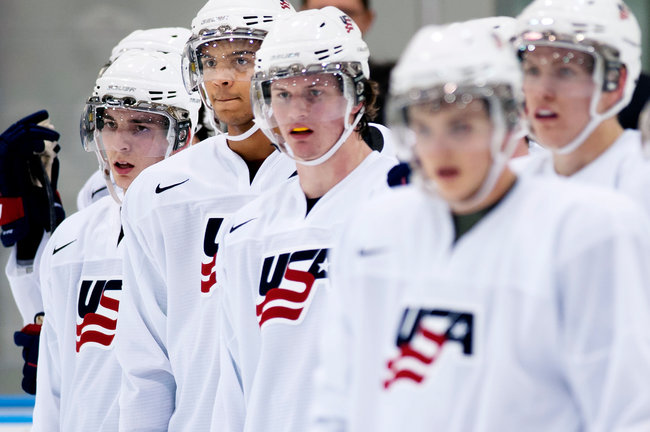 Seth Jones, second from left, is a defenseman with strong skating and puck-handling skills.

“No one wants to live in their father’s footsteps,” Seth Jones said this week when the United States team held a three-day training camp at the Rangers’ practice rink in Greenburgh, N.Y., before heading to Europe. “I think the time will come when I stop getting those questions and everyone knows the story. That’s just my family and my background and part of my life.”

Jones may not have followed in his father’s footsteps, but the stops in Popeye Jones’s career played a large role in Seth’s hockey development.

Popeye became a hockey fan while playing in Dallas. He arrived in 1993, the year the Stars moved to Dallas from Minnesota. Seth was born outside Dallas the next year. After Popeye was traded to Toronto in 1996, the Jones family was steeped in the game through constant exposure to Don Cherry and “Hockey Night in Canada.”

“When I was a guy growing up, the only sports offered to me in a small town in Tennessee were basketball, football and baseball,” Popeye said.

Seth’s path to hockey started in Denver when his father was playing for the Nuggets in 1999-2000, and his older brother, Justin, wanted to play roller hockey with his school friends. Seth, who was about 5, got a pair of in-line skates, too. When the weather turned cold, they received ice skates and hockey gear, but only played pickup games with other children.

Then one day at the Pepsi Center in Denver, Popeye bumped into Joe Sakic, the Colorado Avalanche captain and future Hall of Famer.

“I don’t think he knew who I was, but I knew who Joe was, and I stopped him and introduced myself and said, ‘My kids want to play hockey, and I really don’t know anything about it,’ ” said Popeye, who is 6-8. “He looked at how big I was and said: ‘Make sure they know how to skate. I’m sure they’ll be good athletes.’ ”

Seth took skating lessons with a figure-skating instructor for a year, but what sealed hockey for him was sitting rinkside with Justin and his younger brother, Caleb, when the Avalanche won Game 7 of the 2001 Stanley Cup finals.

“Seeing the Cup in person was just unbelievable,” Seth said.

He went on to star on youth teams when the family returned to Dallas and at the elite United States National Team Development Program in Ann Arbor, Mich., winning gold medals at the 2011 and 2012 World U18 Championship. (Caleb, 16, has been invited to the program’s 2013 tryouts.)

The N.H.L., mired in a lockout and struggling to renew fan interest, would probably welcome the marketing potential of a young African-American star, especially if Jones were to play, say, in Brooklyn when the Islanders move there in 2015.

Seth, whose mother, Amy, is white, said he would prefer that race not be part of the conversation when it comes to his hockey career.

Still, he said he understood why people asked about race. “Anytime I or anyone can help to get kids into the sport of hockey — or any sport, as a matter of fact — it’s huge,” he said.

But he added that being that kind of role model “can put a lot of weight on your shoulders.”

In 1958, Willie O’Ree of the Boston Bruins became the first black player to skate in an N.H.L. game, and only a few others — all Canadian — appeared in the league over the next 20 years. But as Canadian demographics changed, more and more black players made N.H.L. rosters, and by the mid-1990s, it was no longer especially noteworthy to see black athletes in N.H.L. uniforms. Grant Fuhr won four Stanley Cups in five years as an Edmonton Oilers goaltender and was Team Canada’s goalie in the 1980s. Donald Brashear, born in Indiana but raised in Quebec, was one of the most feared fighters of the 1990s. After 15 seasons and 516 goals with the Calgary Flames, Jarome Iginla is one of the most popular players in Canada. 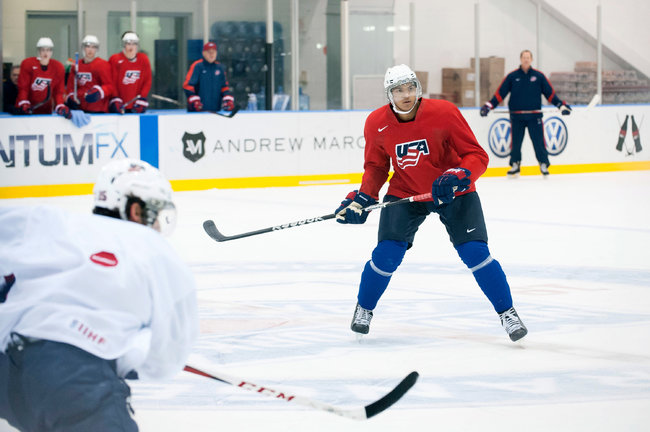 The 6-foot-4 Seth Jones has 28 points in 31 games for the Winter Hawks of the Western Hockey League, third among rookies.

But fewer than a dozen African-American players have skated in the N.H.L. in its 95 years of existence. Val James was the first, in 1981, and about half of the total are listed on current rosters. Only one of the players can be considered something of a star: the Winnipeg Jets’ Dustin Byfuglien, who as a Chicago Blackhawk in 2010 became the third black player, and the first from the United States, to have his name inscribed on the Stanley Cup. (Fuhr, Brashear, Iginla and Byfuglien are all biracial, like Jones.)

Jones said he had never encountered a problem because of his race, on or off the ice. Racially charged incidents on North American rinks have become increasingly rare. Growing up in 1980s Boston, Mike Grier, who retired last season after a 14-season career with four N.H.L. teams, recalled hearing occasional racial slurs from opponents and parents.

Still, there is the occasional incident. Last year, Philadelphia’s Wayne Simmonds, a black Canadian, was taunted by a fan who threw a banana on the ice at a preseason game in London, Ontario. The fan was turned in by other fans and prosecuted. 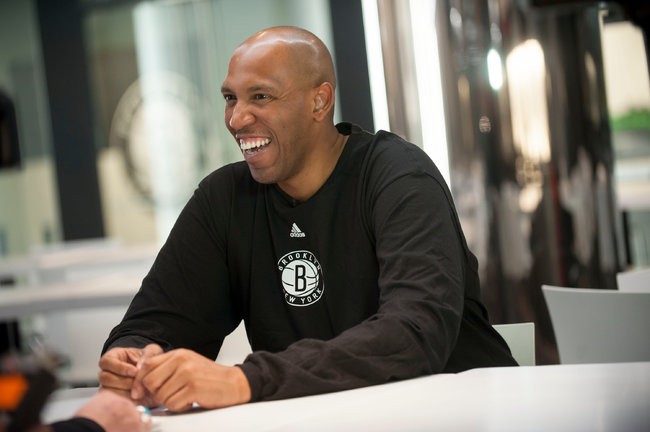 Seth’s father, Popeye Jones, is an assistant coach for the Nets.

In the playoffs, Washington’s Joel Ward, also a black Canadian, eliminated the defending champion Bruins with a Game 7 overtime goal, unleashing a torrent of racist comments on social media.

As Simmonds observed after his incident, “When you’re a black man playing in a predominantly white man’s sport, you’ve got to come to expect things like that.”

Still, Jones said he had not experienced anything of that nature, and his basketball connections might prove to be the more unusual part of his background.

Basketball and hockey do not often overlap. Alex Ovechkin is one of the few N.H.L. players with a basketball background; his mother starred for the Soviet national team. Los Angeles Lakers point guard Steve Nash played hockey while growing up in Canada.

Jones acknowledged that the two sports did not have much in common, but said he learned from watching basketball players.

“The persons I watched closely were Dirk Nowitzki and Jason Kidd,” he said, recalling when his father was an assistant with the Dallas Mavericks. “You’d see Dirk back there behind the scenes taking jump shots before and after games, before and after practices. It just taught me to keep working hard when no ones’s watching, and the person you are behind the scenes is your true self.” 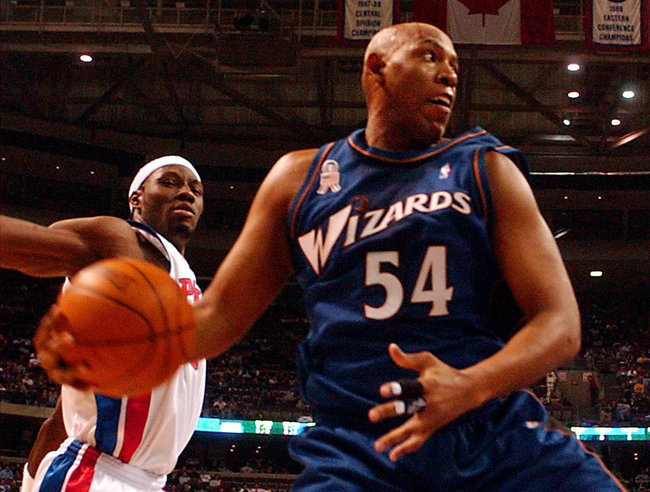 Popeye Jones was taken in the second round of the 1992 N.B.A. draft by the Rockets.

Seth never played organized basketball, but some of Popeye’s basketball DNA seems to have rubbed off.

“We played basketball in Ann Arbor a lot the last couple years, and he’s got a lot of talent,” said Brady Skjei, a United States teammate who spent two years with Jones at the National Team Development Program. “Great hands, a soft stroke, a terrific shot.”

Jones said: “I actually am pretty good at basketball, I have to admit. I have a nice two-way game, I think.”

Popeye and Seth disagreed over which of them would win a game of one-on-one basketball. But Popeye, who was chosen in the second round of the N.B.A. draft, figured Seth would top him in draft position.