Last month, researchers at University College London made public a database that describes in illuminating detail one of the largest government bailouts in modern history. In 1833, Britain paid 20 million pounds to compensate 3,000 Caribbean slaveholders for the emancipation of their slaves. The payments constituted about 40 percent of total governmental expenditures that year. Conversation about the database in Britain centered on the recipients of these reparations for slaveholders, among them the ancestors of George Orwell, Graham Greene and David Cameron.
Apart from a few hundred slaveholders in the District of Columbia, no one in the United States received such compensation for the loss of their human property. According to Abraham Lincoln, at least, the cost of emancipation in the United States was to be reckoned in blood. In his Second Inaugural Address, Lincoln said he feared God would will the war to continue “until every drop of blood drawn with the lash shall be paid by another drawn with the sword.”
This reckoning of the value of slaves in blood and treasure raises an important, though too frequently overlooked, question. What was the role of slavery in American economic development?
The most familiar answer to that question is: not much. By most accounts, the triumph of freedom and the birth of capitalism are seen as the same thing. The victory of the North over the South in the Civil War represents the victory of capitalism over slavery, of the future over the past, of the factory over the plantation. In actual fact, however, in the years before the Civil War, there was no capitalism without slavery. The two were, in many ways, one and the same. 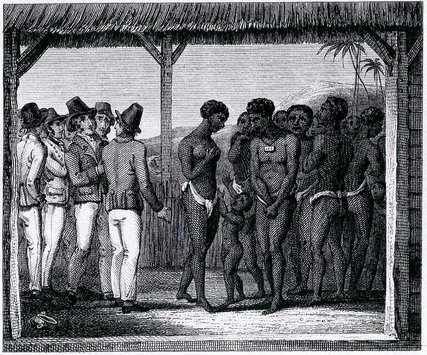 Images of Empire/Universal Images Group, via Getty ImagesProspective European buyers haggle over African slaves at an auction in the Caribbean, circa 1820.

At the end of the 18th century, slavery in the United States was a declining institution. Tobacco planters in Virginia and Maryland had exhausted their soil and were switching to wheat. Wage labor was increasingly replacing slave labor in both the urban and the rural areas of the upper South.
And then came cotton.
The first part of the story is well known: the invention of the cotton gin in the 1790s and the concomitant rise of industrial capacity in Britain and the urban North made possible the profitable cultivation of cotton in a vast region of the lower South, one that stretched from South Carolina to Louisiana, which came to be called the “Cotton Kingdom.”
Between 1803 and 1838, the United States, most famously personified by Andrew Jackson, fought a multifront war in the Deep South. In those years, the United States suppressed slave revolts and pacified whites still loyal to the European powers that had once controlled the region. These wars culminated in the ethnic cleansing of the Deep South. By the end of the 1830s, the Seminole, the Creek, the Chickasaw, the Choctaw and the Cherokee had all been “removed” to lands west of the Mississippi. Their expropriated land provided the foundation of the leading sector of the global economy in the first half of the 19th century.
In the 1830s, hundreds of millions of acres of conquered land were surveyed and put up for sale by the United States. This vast privatization of the public domain touched off one of the greatest economic booms in the history of the world up to that time. Investment capital from Britain, the Continent and the Northern states poured into the land market. “Under this stimulating process, prices rose like smoke,” the journalist Joseph Baldwin wrote in his memoir, “The Flush Times of Alabama and Mississippi.”
Without slavery, however, the survey maps of the General Land Office would have remained a sort of science-fiction plan for a society that could never happen. Between 1820 and 1860 more than a million enslaved people were transported from the upper to the lower South, the vast majority by the venture-capitalist slave traders the slaves called “soul drivers.” The first wave cleared the region for cultivation. “Forests were literally dragged out by the roots,” the former slave John Parker remembered in “His Promised Land.” Those who followed planted the fields in cotton, which they then protected, picked, packed and shipped — from “sunup to sundown” every day for the rest of their lives.
Eighty-five percent of the cotton Southern slaves picked was shipped to Britain. The mills that have come to symbolize the Industrial Revolution and the slave-tilled fields of the South were mutually dependent. Every year, British merchant banks advanced millions of pounds to American planters in anticipation of the sale of the cotton crop. Planters then traded credit in pounds for the goods they needed to get through the year, many of them produced in the North. “From the rattle with which the nurse tickles the ear of the child born in the South, to the shroud that covers the cold form of the dead, everything comes to us from the North,” said one Southerner.
As slaveholders supplied themselves (and, much more meanly, their slaves) with Northern goods, the credit originally advanced against cotton made its way north, into the hands of New York and New England merchants who used it to purchase British goods. Thus were Indian land, African-American labor, Atlantic finance and British industry synthesized into racial domination, profit and economic development on a national and a global scale.
When the cotton crop came in short and sales failed to meet advanced payments, planters found themselves indebted to merchants and bankers. Slaves were sold to make up the difference. The mobility and salability of slaves meant they functioned as the primary form of collateral in the credit-and-cotton economy of the 19th century.
It is not simply that the labor of enslaved people underwrote 19th-century capitalism. Enslaved people were the capital: four million people worth at least $3 billion in 1860, which was more than all the capital invested in railroads and factories in the United States combined. Seen in this light, the conventional distinction between slavery and capitalism fades into meaninglessness.
We are accustomed to reckoning the legacy of slavery in the United States in terms of black disadvantage. The centrality of slavery to the nation’s economic development, however, suggests that any calculation of the nation’s unpaid debt for slavery must include a measure of the wealth it produced, of advantage as well as disadvantage. The United States, as W. E. B. Du Bois wrote, was “built upon a groan.”