On 28 August, in the shadow of Lincoln’s monument, Martin Luther Kingannounced to the March on Washington during his famous “I have a dream” speech that “1963 is not an end, but a beginning”. For legal segregation, it would turn out to be the beginning of the end. The year started with Alabama governor George Wallace standing on the steps of the state capitol in hickory-striped trousers and a cutaway coat declaring: “Segregation now, segregation tomorrow, segregation for ever.” The civil rights leadership was ambivalent about the suggestion of a national march and President John F Kennedy was focused on foreign affairs. Within a few months Alabama would become internationally renowned as policemen turned dogs and high-pressure waterhoses on children as young as six in Birmingham. Civil rights leaders were running to catch up with the militancy of their grassroots activists and the Democratic House majority leader told Kennedy: “[Civil rights] is overwhelming the whole programme”.
This phase of civil rights activism did not start in 1963. Far from it. Until that point there had, of course, been many fearless acts by anti-racist protesters. On 1 February 1960, 17-year-old Franklin McCain and three black friends went to the whites-only counter at Woolworths in Greensboro, North Carolina, and took a seat. “We wanted to go beyond what our parents had done. The worst thing that could happen was that the Ku Klux Klan could kill us … but I had no concern for my personal safety. The day I sat at that counter I had the most tremendous feeling of elation and celebration,” he told me.
But in 1963 the number who were prepared to commit such resistance reached a critical mass. “In three difficult years,” wrote the late academic Manning Marable in Malcolm X, “the southern struggle had grown from a modest group of black students demonstrating at one lunch-counter to the largest mass movement for racial reform and civil rights in the 20th century”. 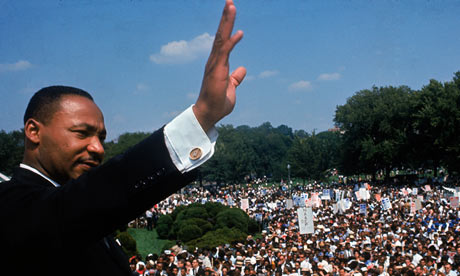 The pace and trajectory of these changes were global. Two days after McCain’s protest, British prime minister Harold Macmillan addressed the South African parliament in Cape Town with an ominous warning: “The wind of change is blowing through this continent,” he said. “Whether we like it or not, this growth of national consciousness is a political fact.” As the decade wore on, that wind became a gale. In the three years between Macmillan’s and King’s speeches, Togo, Mali, Senegal, Zaire, Somalia, Benin, Niger, Burkina Faso, Ivory Coast, Chad, Central African Republic, Congo, Gabon, Nigeria, Mauritania, Sierra Leone, Tanganyika and Jamaica all became independent. “The new sense of dignity and self-respect on the part of the Negro,” King argued in a 1960 essay, The Rising Tide of Racial Consciousness, was due in part to “the awareness that his struggle is a part of a worldwide struggle”. 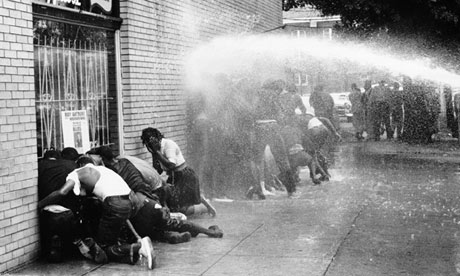 In the US in May, events in Birmingham were transformative. The New York Times published more stories about civil rights in those two weeks than it had in the previous two years. Televised scenes of children campaigning against rigid segregation, being bitten by Alsatians and knocked off their feet by water fired with enough power to rip bark off a tree caused international outrage. Before, only 4% of Americans thought civil rights was the country’s most pressing issue; afterwards it was 52%. According to the Justice Department, in the 10 weeks before King’s “I have a dream” speech there were 758 demonstrations in 186 cities resulting in 14,733 arrests. “Birmingham became the moment of truth,” argued Bayard Rustin, who organised the March on Washington. “Birmingham meant that tokenism is finished. The Negro masses are no longer prepared to wait for anybody … They are going to move. Nothing can stop them.”
The march for jobs and freedom in Washington, which had aroused precious little interest just months before, now became the order of the day. It was a bold initiative. At the time marches in the capital were rare and this one was not particularly popular. A Gallup poll just a few weeks before the march revealed that 71% of Americans knew about it and of those only 23% were favourable while 42% were unfavourable, 18% thought it wouldn’t accomplish anything and 7% thought it would end in violence. Kennedy, who was trying to get civil rights legislation through Congress, tried to talk them out of it. “We want success in Congress, not just a big show at the capitol,” he said. Union organiser A Philip Randolph, who had called the march, told him: “The Negroes are already in the streets. It is very likely impossible to get them off.”
Still, the march drew 250,000 people, roughly a quarter of whom were white and was deemed a great success by many. King’s speech – which received no mention in the Washington Post the following day – would eventually become its most celebrated articulation of the period. “That day for a moment it almost seemed that we stood on a height,” wrote James Baldwin in No Name in the Street. “And could see our inheritance; perhaps we could make the kingdom real, perhaps the beloved community would not for ever remain that dream one dreamed in agony.”
It did not take long for the realities of southern bigotry to deflate the mood. “There was no way we could have known then that that afternoon would represent the peak of such feelings, that the hope and optimism contained in King’s words would dwindle in the coming years,” wrote Congressman John Lewis; “that in a matter of mere days after he stepped down from that stage a bomb blast in Birmingham would kill four little girls and usher in a season of darkness for the movement and for me.”