Bonnie and Clyde, the Aerial Version

‘The Skies Belong to Us’ Relates a 1972 Hijacking

By DWIGHT GARNER     Published: June 13, 2013 The writer Nick Tosches, reviewing a live album by Ronnie Milsapin 1976, called it “some of the best junk music you’re going to hear all year.”

It’s tempting to say something similar about Brendan I. Koerner’s new book, “The Skies Belong to Us: Love and Terror in the Golden Age of Hijacking.”

Mr. Koerner’s book isn’t junk. But it’s such pure pop storytelling that reading it is like hearing the best song of summer squirt out of the radio. Both the author and his subjects are so audacious that they frequently made me laugh out loud.

In post-Sept. 11 America we are not accustomed to having much sympathy for those who would hijack airplanes — skyjackers, as the neologism has it. But Mr. Koerner’s book returns us to a more innocent time.

His book is about the 1960s and early ’70s, when you could walk through an airport “without encountering a single inconvenience — no X-ray machines, no metal detectors, no uniformed security personnel with grabby hands and bitter dispositions.”

Once on board, you could smoke four cigarettes at the same time, if you felt like it. Some airlines allowed you to buy your tickets after takeoff.

A generation of criminals and bumblers and lost souls exploited this innocence. Mr. Koerner alights on the years from 1961 to 1972, when 159 commercial flights were hijacked in the United States, sometimes more than one a week. 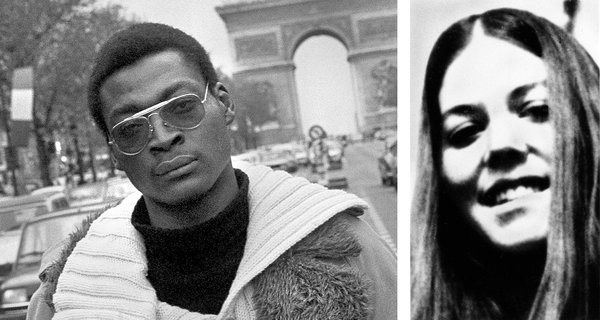 Associated Press—-Roger Holder, 28, in Paris in 1977, and Cathy Kerkow in 1972. Former childhood acquaintances, they hijacked Western Airlines Flight 701 from California to Algeria in 1972.

Few of these skyjackers were what we would now recognize as terrorists. Among their ranks, Mr. Koerner says, were “frazzled veterans, chronic fabulists, compulsive gamblers, bankrupt businessmen, thwarted academics, career felons and even lovesick teens.”

Most didn’t intend to harm anyone. They wanted ransoms, and fresh starts in places like Cuba. More than anything they wanted a small slice of fame. “A lone skyjacker could instantly command an audience of millions,” Mr. Koerner observes. “There was no more spectacular way for the marginalized to feel the rush of power.”

Mr. Koerner is a contributing editor at Wired, and the author of a previous book, “Now the Hell Will Start: One Soldier’s Flight From the Greatest Manhunt of World War II” (2008).

He folds many sad, weird and riveting skyjacking stories into “The Skies Belong to Us,” most of them little known, some more so, like the case of D. B. Cooper, who vanished out of a Boeing 727 in 1971 with more than $200,000.

The author carefully charts the slow movement toward screening baggage with metal detectors at airports, which did not become mandatory until 1973. The airlines and their lobbyists fought screening measures. They thought costs would be prohibitive, and that passengers would rebel. Civil libertarians fought screening, too.

The best move that Mr. Koerner makes in “The Skies Belong to Us” is wrapping all his information around one incredible single story, that of a veteran named Roger Holder and an imposingly beautiful would-be hippie named Cathy Kerkow, who in 1972 hijacked Western Airlines Flight 701, on its way from Los Angeles to Seattle, as a vague protest against the Vietnam War.

This event started small. It grew big and shaggy, as if a vision concocted by the directorRobert Altman. It became the longest-distance skyjacking in American history. The plane ended up in Algiers.

Along the way, Angela Davis, Eldridge Cleaver and Jean-Paul Sartre became involved. Astrology charts were consulted midflight, and a lot of marijuana was smoked while cruising over the American heartland. Mr. Holder and Ms. Kerkow joined the mile-high club. Did I mention that while they were in the air, a second plane was hijacked over American airspace?

The couple became folk heroes of a sort, Bonnie and Clyde at 33,000 feet. Later they would mingle in Paris with movie stars and the social elite. The pair had claimed to have had a bomb, but they were not in fact carrying real weapons. No one aboard was hurt.

Mr. Koerner tells this story so well, with so many offbeat cliffhangers, that I am loath to give away much more than I already have.

Mr. Holder had fought with distinction in Vietnam, flying with the 68th Assault Helicopter Company. But he saw a lot of bloodshed and madness and began to come unglued. He was court-martialed, imprisoned and demoted, despite his six service stars, after being caught smoking a joint while off duty in Saigon. He became bitter at his fate.

Back in the United States, in San Diego, he became reacquainted with Ms. Kerkow, whom he’d met as a child in the logging town in Oregon where they’d both lived. She was working in a massage parlor.

Mr. Holder came up with a plan to hijack a plane and swap the passengers for Ms. Davis, the scholar and activist who was then on trial in California for her suspected involvement (she was acquitted) in the politically motivated murder of a judge.

The rest of the plan included flying Ms. Davis to North Vietnam to help expose the evil of the American war there, and for the couple to retire to a farm in Australia. When Ms. Kerkow heard this plan, she responded: “So, what do I wear to a hijacking?”

“The Skies Belong to Us” gets off to a shaky start. Its author is not a writer of memorable sentences, and some of them can veer toward squeeze cheese. (“Kerkow had never shared her bed with anyone so gutsy, so far-out, so real.”)

But he finds the ideal tone — a nearly invisible voice — for the fleet true-crime story he is telling, and he introduces us to a supporting cast that’s rarely less interesting than the skyjackers themselves: brave flight attendants and pilots, F.B.I. agents, African despots. And he locates the deep reserves of personal sadness lingering beneath the entire melodrama.

“The skyjacking surge was one of the biggest stories of 1972, right up there with President Nixon’s landmark trip to China,” the author writes. “Even the dullest skyjacking made for scintillating copy. And the truly sensational ones were like gifts from the journalism gods.”

Upon Mr. Koerner, those gods have smiled.

Palmares Republic In Brazil Founded By Africans In 1605

Estevanico; African born man who explored Mexico and Arizona in the early 1500's