By EVE M. KAHN
Published: August 30, 2012
Newly discovered vessels by David Drake, an enslaved 19th-century potter in Edgefield, S.C., keep emerging, either whole or in shards.
He signed his pots “Dave” and added witty couplets that sometimes praised the very “noble jar” on which they were inscribed or expressed his longing to see the stars or lost family members. He helped run his owners’ kilns, each of which measured about 100 feet long and required 10 tons of firewood a day.
On Sept. 9 Charlton Hall Auctions in West Columbia, S.C., will offer an 1858 stoneware churn by Drake (estimated at $100,000 to $175,000) that just turned up in a private collection. “This is a noble churn/fill it up it will never turn,” he wrote around the jar’s opening.
The lines probably meant that the sturdy 14-gallon pot would withstand vigorous churning sessions and also that the milk would not turn sour. In addition, “he may be recalling the motion that the pot made as it revolved on the potter’s wheel, as it came into being,” Leonard Todd, the author of the 2008 book “Carolina Clay: The Life and Legend of the Slave Potter, Dave” (W. W. Norton & Company), wrote in an e-mail. (Mr. Todd’s ancestors were among Drake’s owners.)
A nearly complete documentary, “Discovering Dave — Spirit Captured in Clay,” from Scrapbook Video Productions in Augusta, Ga., is based partly on a smashed 1862 Drake pot that the Savannah River Archaeological Research Program excavated near Augusta. 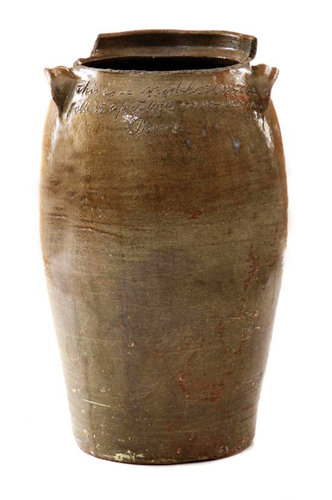 An 1858 stoneware churn inscribed by David Drake, a slave potter in Edgefield, S.C.

The vessel has been reassembled, and the research program’s coordinator, George Wingard, brings it to lectures and lets the public touch the signature. Drake also left traces of his presence along the rim.
“You can see the markings where his hands, his fingers, were in there,” said Mark Albertin, a producer of the film with Mr. Wingard.
Archaeological studies around Edgefield, led by the University of Illinois, Urbana-Champaign, have yielded ghosts of kilns and bagfuls of pottery shards. When students were cleaning one ordinary-looking fragment, it revealed the word “you,” etched in Drake’s firm cursive.
“That sent chills up my spine,” George W. Calfas, the principal investigator at the dig, said in a recent phone interview. He is contributing to a book in progress, “Poet, Potter, Slave, Myth: Collected Essays on David Drake,” edited by Michael A. Chaney, an associate professor of English at Dartmouth.
Scholars have not yet determined where Drake’s parents came from. They may have trained as potters in Africa; slave traders there often kidnapped skilled laborers in the villages.
At slave auctions “the price was high if you were a potter,” said Pearl Duncan, a historian in New York who is researching early African-American craft artists for a book about the 18th-century merchant ship uncovered at the World Trade Center site.
ART, BUSTS AND SPHINXES
Lee B. Anderson filled a Manhattan town house with Gothic and Egyptian Revival furniture and Neo-classical statues of politicians and authors. Pinnacles and sphinxes sprouted from chairs, brackets and inkwells, and shelves were packed with busts of Patrick Henry and Washington Irving, among other luminaries.
Mr. Anderson, a retired art education teacher who died in 2010, often pasted labels onto his purchases, identifying makers and likely previous owners.
The collection is now being dispersed. On Sept. 8 and 9, Neal Auction in New Orleans will offer about 1,000 pieces from the estate, and about 1,000 more will appear in a Sept. 19 auction at Doyle New York. (Lots are mostly estimated at a few thousand dollars each in both sales.) More paintings and furniture are slated for Doyle in November and Sotheby’s in New York in January.
For Sept. 19, Doyle has placed a $20,000 to $40,000 estimate on an 1871 white marble relief of a gentleman in profile, sculptured by Edmonia Lewis. Mr. Anderson believed it represented Ralph Waldo Emerson. But Lewis, who had a black father and an Ojibwa mother, might have found Emerson distasteful; he considered nonwhites inferior.
Moreover, she apparently never met Emerson. “We haven’t found any record of a sitting,” said Albert Henderson, a historian who runs a Web site dedicated to the artist,edmonialewis.com, and is publishing an e-book about her.
Lewis had a busy workshop in Rome after the Civil War and often sculptured white activists, including William Lloyd Garrison and Robert Gould Shaw. Marilyn Richardson, an art historian who is writing a Lewis biography for the University of North Carolina Press, said the Doyle carving actually depicted the abolitionist Wendell Phillips.
He had flamboyant sideburns like the strands bristling on the 1871 sculpture. “She really captured him,” Ms. Richardson said in a phone interview.
VINTAGE AFRICAN ARCHIVE
Artur Walther does not like to display his vast vintage photography collection at his Manhattan penthouse, which is ringed with terraces, because of the threat of sun damage.
“It’s just — I’m so scared of the light,” Mr. Walther, a retired Goldman Sachs partner, said recently in his apartment, while giving a preview of a two-year exhibition series that starts next month in galleries run by his family foundation.
He is particularly drawn to images of Africans, whether European scientists’ clinical portraits of tribesmen or African intellectuals’ snapshots of one another. The series, “Distance and Desire: Encounters with the African Archive,” will run in three phases, from Sept. 13 through next May at the Walther Collection’s Manhattan branch on West 26th Street in Chelsea, with a symposium on Nov. 10 at New York University. Next summer the collection will take over the Walther museum at Mr. Walther’s childhood home in Germany, on the outskirts of Ulm.
During the preview Mr. Walther wore white cotton gloves to protect cards showing anonymous nudes (one was condescendingly captioned “a real beauty”), idyllic tableaus of villagers dancing and disturbing anthropometric charts measuring handprints and facial features.
The fall exhibition will focus on works from the early 1900s by Alfred Martin Duggan-Cronin, the Irish-born photographer who lugged his tent darkroom across South Africa. He took along traditional outfits and props to lend to his subjects so they would look more authentic.
Duggan-Cronin would spend weeks persuading a tribal leader to pose draped in a regal lion skin, “which the chief had never worn in his life,” a reporter for Diamond Fields Advertiser wrote in 1937. In a 2010 essay Michael Godby, the University of Cape Town historian, pointed out that apartheid’s supporters used the Duggan-Cronin photos to argue that blacks lived happily segregated in primitive conditions.
The Walther gallery will also play a 1997 slide show by the contemporary photographer Santu Mofokeng, “The Black Photo Album/Look at Me: 1890-1950.” It flashes through studio portraits of black business people, teachers and pastors, some carrying parasols or tennis rackets.