Global Black Community News
May 10, 2013 Ro Ho 0 Comments
John von RheinClassical music critic     2:48 p.m. CDT, May 10, 2013
A conductor who understands the challenges female musicians of color face is leading the first Chicago Symphony Orchestra performances this week of a work by a black woman composer who faced similar obstacles during her lifetime.
Mei-Ann Chen chose as the centerpiece of her debut program on the CSO subscription series “Mississippi River,” an orchestral suite by Florence Price that was entering the orchestra’s repertory for the first time. The performance, heard Thursday night at Symphony Center, was accompanied by a proclamation from Mayor Rahm Emanuel marking the official launch of the orchestra’s ambitious multidisciplinary festival, “Rivers: Nature. Power. Culture,” which runs to June 9.
Price wasn’t the only African-American composer honored during his or her lifetime but posthumously neglected. But her obscurity is particularly grievous, given the size and quality of her output, which includes more than 300 compositions, ranging from symphonies, concertos and chamber works to songs and spiritual arrangements. Apart from the vocal pieces, most of her oeuvre remains unpublished and unknown.


History books credit Price with being the first black woman in the U.S. to be recognized as a symphonic composer. Born in Little Rock, Ark., she moved with her husband to Chicago during the late 1920s and lived, studied and worked here until her death in 1953. She won several composition awards for works such as her Symphony No. 1, which the CSO premiered at the Century of Progress Exposition here in 1933. In the years that followed, her fame spread as far as the British Isles, where John Barbirolli commissioned and premiered a suite for strings she wrote for his Halle Orchestra in Manchester.
But Price’s folkish, conservative, tonal idiom was falling out of fashion even before her death, despite the efforts of such major artists as Marian Anderson and Leontyne Price to keep her songs and spiritual arrangements before the public. Hats off, then, to Chen for reminding us of a missing chapter in the classical musical life of the city.
The 30-minute “Mississippi River” dates from 1934 and is meant to evoke feelings associated with a boat cruising down the river and the folk music heard along its banks. Price incorporates her own arrangements of such familiar spirituals as “Deep River” and “Nobody Knows the Trouble I’ve Seen” along with original connective tissue. The suite is attractive, tuneful, nostalgic, cannily scored, direct of expression. Its unabashed populism recalls the folkish scores Virgil Thomson provided for Pare Lorentz’s documentary films “The Plow That Broke the Plains” and “The River” in the late ’30s.
Is a Florence Price renaissance upon us? I think not. Still, the very fact that the CSO is rehabilitating a once-lauded name in Chicago music is important — more so, in fact, than the score itself. Chen clearly believes in the musical merits of “Mississippi River,” and she succeeded in transferring her admiration to the orchestra. Thursday’s audience responded warmly. It’s good news that the Northwestern University Chamber Orchestra will perform Price’s First Symphony June 6 at Pick-Staiger Concert Hall in Evanston. 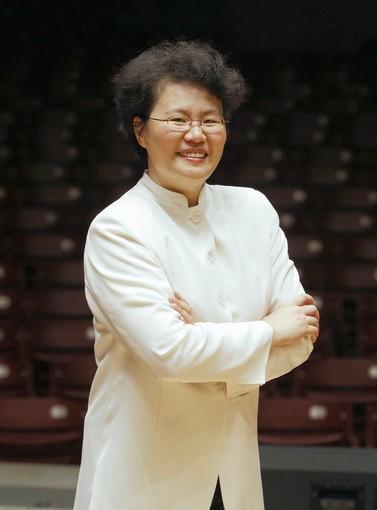 
Chen, who’s used to performing similar rescue missions as music director of the Chicago Sinfonietta, is a compact bundle of tightly wound energy when the music is loud and muscular, weaving sweeping arcs in the air when the music sings. She got to display both sides of her musical persona in the works surrounding the Price suite — Mendelssohn’s “The Fair Melusina” Overture and Rimsky-Korsakov’s “Scheherazade.”
Her reading of the Mendelssohn, unaccountably absent from the downtown CSO repertory for more than 54 years, underlined the contrast between mellifluous lyricism and surging drama, rather too emphatically for such innocently romantic music.
That same intensity of feeling worked better in Rimsky’s colorful Arabian Nights fantasy. Chen wrung a full measure of excitement and power from the showpiece without skimping on the characterful detail the composer packed into his sumptuous sonorities. Concertmaster Robert Chen was a storyteller of aching sweetness and beauty in the extended violin narrative. There were fine solos from David McGill, bassoon; Stephen Williamson, clarinet; Eugene Izotov, oboe; and Mathieu Dufour, flute.

28 yr. old Student from Gambia, Africa was gunned down during gas station robbery

Adoptive mother 'locked children in their rooms, beat them with a HAMMER, zip-tied their hands together and forced them to use trashcan as toilet'