They have remained hidden for more than five centuries, but tiny figures of naked men wearing feathered head-dresses could be the first Western depiction of Native Americans, the Vatican claims. The group of tiny figures was discovered during the restoration of a magnificent fresco, owned by the Vatican, which depicts Christ’s Resurrection.
The painting, by the Renaissance master Pinturicchio, was finished in 1494, just two years after Christopher Columbus first set foot in the New World.
It has adorned the walls of the Borgia Apartments in the Vatican for 500 years but was only recently subjected to restoration work.
The naked men, who appear to be dancing, were spotted by a restorer, Maria Pustka, as she removed centuries of grime. Christ’s Resurrection by Pinturicchio. Photo: Musei Vaticani
The figures, which appear just above the image of an open marble casket from which Christ has risen, had previously gone unnoticed.
The discovery was unveiled by Antonio Paolucci, the director of the Vatican Museums, in L’Osservatore Romano, the city state’s daily newspaper.
Prof Paolucci suggests that the “nude men, who are decorated with feathers and seem to be dancing,” were inspired by the descriptions of tribesmen that Columbus brought back from his travels.
Columbus’s voyages across the Atlantic were commissioned by Spain, but Prof Paolucci said the Vatican would inevitably have heard of his discoveries, particularly given that the Pope at the time, Alexander VI, the notorious Rodrigo Borgia, was Spanish.
“The Borgia Pope was interested in the New World, as were the great chancelleries of Europe. It is hard to believe that the papal court, especially under a Spanish pope, would have remained in the dark about what Columbus encountered,” Prof Paolucci said in the article.
Columbus described meeting tall, well-built natives whose bodies were daubed with red and black pigmentation and who gave him parrots as presents.
The explorer, who was from Genoa, made four journeys in total, all under the patronage of King Ferdinand and Queen Isabella of Spain.
He set out on the first voyage in August 1492, with his first land fall in the New World believed to be an island in what is now the Bahamas.
He continued to modern-day Cuba and Hispaniola, all the time looking for gold. When he arrived back in Spain in March 1493, news of his discoveries became a sensation and spread through Europe.
He described his encounters in letters to Ferdinand and Isabella, and within months a copy of the letter, written in Latin, was circulating in Rome.
Pope Alexander VI soon found himself playing a pivotal role in the New World discoveries – he had to arbitrate between the competing claims of Spain and Portugal.
While Alexander deliberated on the division of spoils and issued papal bulls, Pinturicchio was busy decorating the Borgia Pope’s apartments.
At a time when the Columbus’s epic discoveries were so much a part of Vatican affairs, Prof Paolucci believes that it is no surprise that a reference to the New World features in the painting.
The mysterious figures remain unnoticed for so long because the Borgia Apartments were abandoned after the death of Alexander VI in 1503.
Subsequent Popes did not want to be associated with the notorious family of schemers and adulterers.
They were only reopened in 1889 by Leo XIII, and are now used to display a collection of religious art.


By ELISABETTA POVOLEDO  May 6, 2013, 5:58 pm
ROME – Vatican officials say they have found what could be the first European images of American Indians in a fresco painted within two years of Christopher Columbus’s first voyage to the so-called New World.
The lightly sketched group of men — nude save for what appear to be feathered headdresses and posed as if dancing — emerged during the restoration of a fresco of the “Resurrection of Christ” by the Renaissance artist Pinturicchio, painted in one of several rooms he decorated for Pope Alexander VI between 1492 and 1494.
Writing last week in L’ Osservatore Romano, the Vatican newspaper, Antonio Paolucci, director of the Vatican Museums, suggested that the figures are consistent with the descriptions that Columbus gave in his letters of the indigenous people he saw upon his arrival in the Americas.
The figures’ appearance in the fresco is in keeping with a practice common during the Renaissance of introducing contemporary elements into historical or sacred scenes, said Franco Ivan Nucciarelli, a Pinturicchio scholar who teaches at the University of Perugia. And in particular, Alexander VI had a great interest “in emphasizing his ties with the New World,” which gave him much power, Mr. Nucciarelli said. 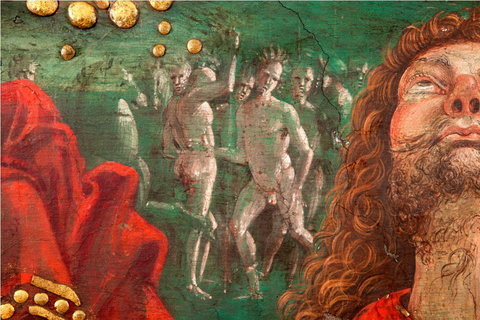 Musei Vaticani—–Detail of a fresco of the “Resurrection of Christ” by Pinturicchio.

Nor would the inclusion of these figures be out of place in frescoes painted for Alexander VI, the former Spanish cardinal Rodrigo Borgia, Mr. Paolucci noted. “The Borgia pope, elected just a few months before Columbus made landfall, “was interested in the New World, as were the great chancelleries of Europe,” he wrote. “It is hard to believe that the papal court, especially under a Spanish pontiff, would have remained in the dark about what Columbus saw when he arrived at the ends of the earth.”
The figures emerged from under layers of soot and overpainting during a 2006 restoration of the space called Room of the Mysteries, which includes “Resurrection of Christ,” but Vatican experts took a cautious approach to their findings. “We didn’t publicize them because we wanted to carry out further verifications,” said Maria Pustka, who is responsible for restoring the rooms once inhabited by Alexander VI. “Now that further research been carried out, we felt it was opportune to make the finding known.”
Pinturicchio lightly sketched the figures in black and white paint directly onto the dried fresco, an unusual “and interesting” technique, she said, and they were painted over in successive restorations. When wet, the figures disappear altogether, she said.