A 20-year-old man attempted to rape his grandmother after complaining to her he could not get a girlfriend.

Samuel Dye is alleged to have beaten his grandmother with a hammer before launching the sex attack.

He had complained about not being able to find a girlfriend and told her he was going to ‘get some’.

Police said Dye’s assault was stopped by his father after he heard the screams of his 61-year-old mother. 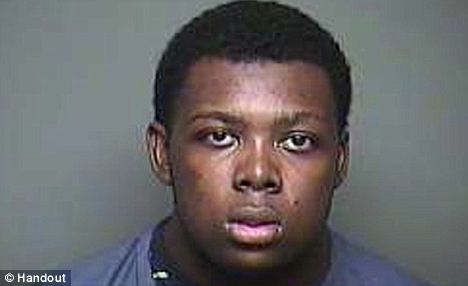 Caught in the act: Samuel Dye allegedly tried to rape his grandmother

He found his son on top of his mother with his trousers pulled down and hitting her in the head with a hammer.

The father pulled his own away and detained him until police arrived.

The alleged attack took place after Dye turned up at his grandmother’s home in Chester, South Carolina, at 4am last Thursday.

The woman told police Dye showed up at her home with a hammer in his hand and began complaining about not having a girlfriend. He said he was going to ‘get some’.

The arrest report, seen by the Charlotte Observer, said Dye began attacking her.

She pleaded with her grandson to stop and suggested they pray together.

Dye then exposed himself to the woman and tried to rape her before hitting her in the head again and knocking her onto the ground, the report states.

Sheriff Richard Smith said Dye’s father caught him ‘in the act’ of trying to rape his mother.

Records with the State Law Enforcement Division shows that Dye has no prior criminal history in South Carolina, aside from a seat belt violation that is still pending in court, it was reported by the Charlotte Observer.

The Guide for the Perplexed by Rabbi Moshe ben Maimon

Model Sues ‘The Price Is Right’