Economic powerhouses China and India were both named among the worst offenders.

The report defined ‘modern slavery’ as human trafficking, forced labour, and practices such as debt bondage, forced marriage, and the sale of children. Shocking: The study found that modern slavery is at a global all time high. Children taken off the ‘Etireno’ slave ship in 2001, above, were examples of modern slavery at work 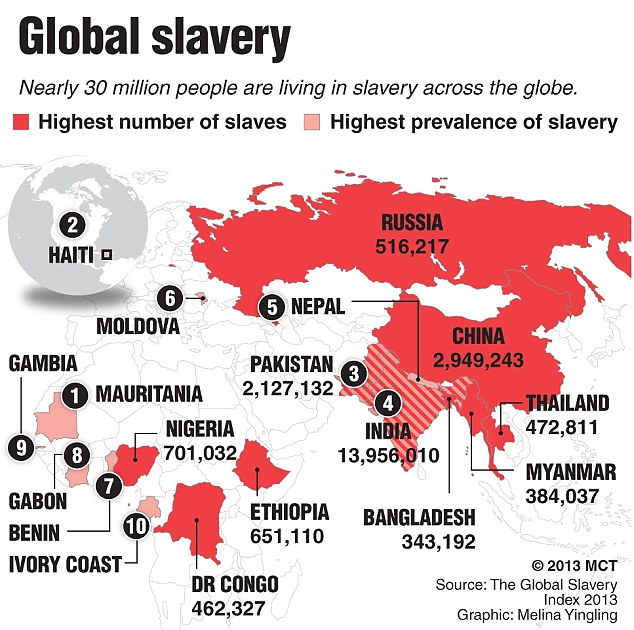 According to its authors, exploitation of this kind is at all all time high.

The index has ranked offending nations based on the prevalence of slavery, the risk of enslavement there and the strength of government responses to combating the illegal activity.
Researcher Kevin Bales said he hoped the index, the first annual report to monitor slavery globally, would raise public awareness and increase pressure on governments to take more action.
Modern slavery is often thought to be the result of widespread poverty and the exploitation of the poor.
But Bales, a professor of contemporary slavery at the Wilberforce Institute for the Study of Slavery and Emancipation at the University of Hull, rejected that theory.
Instead he blamed corruption in governments for the growth of the practice and called for laws to stop organised trafficking gangs. 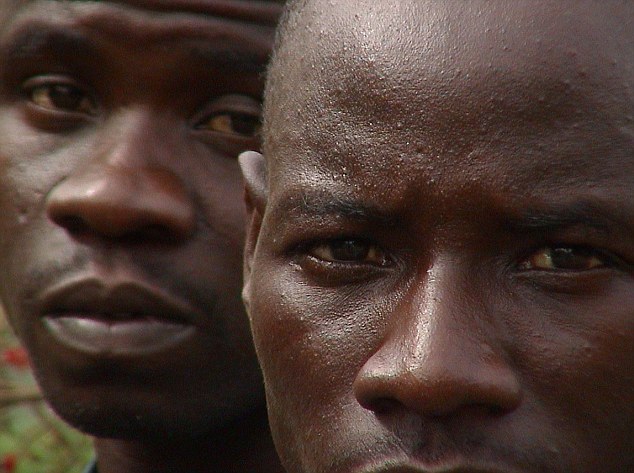 Illegal practice: These men, who worked as part of a forced labor camp in the Ivory coast, are just some of the near 30 million people effected by modern slavery, the study said

He said: ‘Consistently when we analysed the statistics we found that corruption came out as more powerful than poverty in driving slavery. Fundamentally this is a violent crime issue.’
It found that 10 countries accounted for 76 percent of the 29.8 million people living in slavery.
They were India, China, Pakistan, Nigeria, Ethiopia, Russia, Thailand, the Democratic Republic of Congo, Myanmar and Bangladesh.
The report concluded that Mauritania in West Africa had the highest number of slaves proportionately, with up to 160,000 enslaved in a population of 3.8 million.

This, the index says, is due to the common practice of chattel slavery, a form of traditional ownership which passes through generations, and high levels of child marriage.
The highest absolute numbers were almost 14 million in slavery in India and 3 million in China.
The report read: ‘By far the largest proportion of this problem in IndiaI is the exploitation of Indian citizens within India itself, particularly through debt bondage and bonded labour’
In China there was forced labour of men, women and children, including domestic servitude and forced begging, sexual exploitation of women and children and forced marriage. 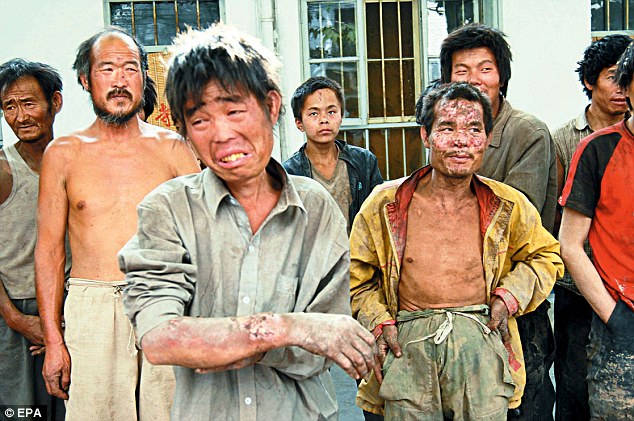 Cruel: China has one of the worst records for modern slavery, globally. These men are some of the 32 rural workers rescued from an illegal brickyard at the village of Linfen, in north-east China`s Shanxi province in 2007.

Coming last in the index were Iceland, Ireland and Britain although Bales stressed they were not slavery-free.
Up to 4,400 people are estimated to be enslaved in Britain, the victims mainly from Africa, Asia and Eastern Europe.

They are forced into sex work, domestic servitude, or low-paid jobs in agriculture, construction, restaurants and nail salons.
‘Hopefully this report will be a wake-up call for rich countries as well’ said.
Read more: http://www.dailymail.co.uk/news/article-2464715/Nearly-30-million-world-slaves-reveals-new-report-India-China-Pakistan-worst-offenders.html#ixzz2i0TQCeCt

Black Republican says blacks have taken a back seat to gays, immigrants