The African Union may be a shadow of the original post-colonial vision. But its potential to inspire remains

If one were to ask people in the streets of any African capital to name a union of states that readily comes to mind, they are likely to mention the United Nations, the United States of America and possibly the European Union. And the African Union? Oh yes, yes, I have heard of it, a few might say. And yet the Organisation of African Unity – as the African Union was called in 1963 when it was set up in Addis Ababa with 30 signatories – now includes virtually all the African states, and is 50 years old come Saturday.
This should mean something, shouldn’t it? Africa is a huge continent: Europe, the US, China and India can be contained within it. This means that Africa has the most natural resources – including land for agriculture, and mines for almost every conceivable mineral. These, including her human resources, have played a central role in the evolution of capitalism from its mercantile through its industrial to its current global finance dominance – all to the advantage of the west and the disadvantage of the people of Africa.
The OAU, and the independence it so ably championed through its liberation committee, was meant to reverse that historical trend – and find its own version of the old US anti-colonialist Monroe doctrine and manifest destiny: Africa for Africans at home and abroad. 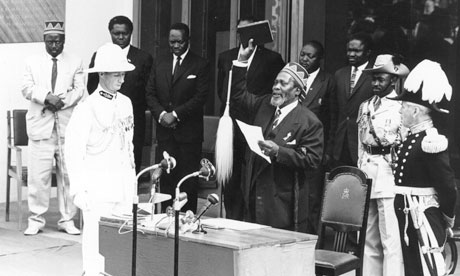 Jomo Kenyatta is sworn in as Kenya’s first post-independence prime minister in Nairobi, in 1963. ‘The 1945 Manchester-based fifth Pan-African Congress led to many exiles returning home to lead anti-colonial nationalism. Among these was Kenyatta.’ Photograph: Keystone/Getty Images

It was founded on a dream, its roots in the pan-Africanism of WEB Dubois – an African-American scholar, author of Souls of Black Folk, and founding president of the still running National Association for the Advancement of Colored People. He was the most consistent presence in the early Pan-African Congresses held in the capitals of Europe, including London, Paris and Brussels. He was also the prime mover in drawing in continental African participants, such as Kwame Nkrumah and Jomo Kenyatta.
Contributing to the idea, though not as a member of the Pan-African Congresses, was Marcus Garvey – the Jamaican founder of the Universal Negro Improvement Association in 1914 that, between the wars, blossomed into the biggest organised mass movement of black people in history. His publication, Negro World, was hunted down by a terrified colonial officialdom, from the French to the British, because of its clarion call of Africa for Africans.
In its origins, the pan-African idea was Caribbean and black American before it became continental African. Embodying the Garveyite vision of the unity of Africans and all people of African descent, pan-Africanism gripped the imagination of the anti-colonial activists, reaching its pinnacle in the 1945 Manchester-based fifth Pan-African Congress that led to many exiles returning home to lead anti-colonial nationalism. Among these was Kenyatta, who returned to Kenya only to be imprisoned by the British as the leader of Mau Mau; and Nkrumah, who led Ghana to independence in 1957, and declared that this independence was not complete without the rest of the continent. He saw Ghana as the nucleus of a future political federation of African states strong enough to safeguard its natural resources, and flex its muscles to project the African personality in world affairs.
The OAU was a vastly watered down version of that vision. The AU became a watered version of OAU, reduced to a talking shop rather than a fighting club. It has become invisible within Africa, and in the world. It cannot safeguard the continent from the traditional marauders of the west. Has one ever heard of African-owned corporations in the west? African-owned oil companies drilling in the west? And yet western-owned corporations proliferate in the continent.
Has one ever heard of an African army invading Europe or America, or even stationing its troops and bases in any part of the two regions, or its ships patrolling European and American waters? The west has troops in nearly all African countries, with an American-controlled Africa command. When Nato forces planned the invasion of Libya, they brushed aside the concerns of the AU, which became a helpless bystander. In short: despite the AU, Africa continues to be the west’s playground.
In a strange way both African and western governments fear a strong, united, democratic Africa. For the west such unity would mean it could no longer do whatever it wants with Africa’s resources. It would no longer be the sole determinant of the prices for exports to, and imports from, the continent. Its oil and mining companies would no longer continue to be the sole, invisible masters of Africa’s vast oil and mineral resources.
For African governments, unity would mean ceding some of their powers to a federal authority. And to realise even this minimum, they would have to make sure that the union was a people’s union, and not a union of African heads of state. But I have a feeling that most of these leaders would rather remain tin gods than have a God who can make tins. The days when Kwame Nkrumah could link the sovereignty of Ghana to that of the continent – or Julius Nyerere offer to delay the independence of Tanzania if such a move would lead to an East African Union – are a distant 50 years ago.
Does that mean the AU is not necessary? It is better to have a skeleton of a union than no union at all. The skeleton brings memories of a breath of life, but also dreams of a resurrection. For the sake of the people of Africa a strong, democratic African Union is needed today as much as it was 50 years ago. Despite its failures and weaknesses, the AU keeps the dream alive. And as Victor Hugo once put it: there is nothing like a dream to create the future.