LIKE many single mothers, Barbara Terry, 52, scrounged for baby sitters and leaned on her own mother while raising her four children and working the night shift.
But Ms. Terry is a prostitute who has worked nearly her entire adult life on the streets of Hunts Point, in the Bronx.
“When they were old enough to understand, I would tell them the truth,” said Ms. Terry, whose daughter and three sons are now grown. “I’d say, ‘This is how I’m supporting you.’ For me, it’s a business, a regular job.”
Yes, she said, she was arrested more than 100 times, sometimes landing at Rikers Island for several days or weeks — but that never deterred her from returning to this area of industrial warehouses and repair shops off the Bruckner Expressway.
By day, heavy industrial traffic fills the streets. By night, the traffic comes for other reasons. Years back, this prostitutes’ “track” bustled with working women, and Ms. Terry was front and center in garter belts and high heels and fur coats.
“It was beautiful out here then,” she said. “There was so much money out here, you wouldn’t believe it.”
The area is less active now than in the 1990s, when HBO made its “Hookers at the Point” documentaries, in which Ms. Terry appeared under a street name, Cleo, and flashed a youthful, toothy smile.
Those great teeth are gone, lost to diabetes, Ms. Terry said. She mostly works days now and dresses more conservatively. “Most women don’t make it to my age out here,” she said. “I call myself the last of the survivors.”
While it is impossible to corroborate all the details of an eventful life in a profession often synonymous with drug abuse, violence and tragic outcomes, the Correction Department confirmed that Ms. Terry had been jailed many times for prostitution over her career.
Today, Ms. Terry lives nearby in the Bronx, but she hopes to retire in a year or so to a house she bought upstate, she said on Tuesday at her usual spot on Whittier Street. She had a supply of condoms in her purse, a plastic cup of vodka and orange juice in her hand and a cellphone for steady customers.
Those customers, dates or tricks, can be lawyers, city workers, husbands, fathers or truckers heading in and out of the sprawling Hunts Point food markets. 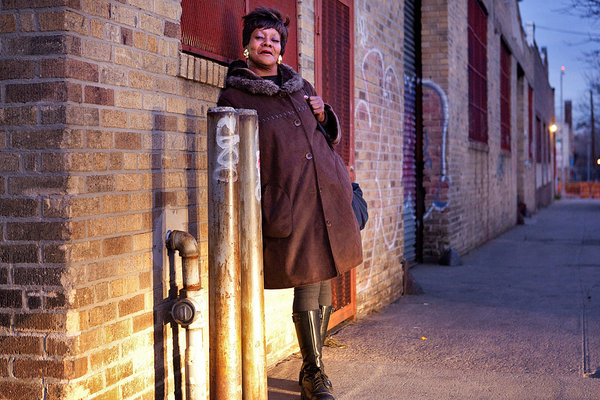 Barbara Terry, 52, has worked nearly her entire adult life as a prostitute in the Hunts Point section of the Bronx. She hopes to retire in a year or so to a house she bought upstate.


Then there are the psychos. All the women out here have had friends attacked or cut or dumped dead somewhere. Last year, a man was arrested, and recently sentenced, for terrorizing prostitutes in the Bronx with a razor.
“I’ve survived because God was with me,” Ms. Terry said. “Every Sunday, my mother and grandmother prayed for me out here.”
She has shown younger workers the ropes: how to jump in a Dumpster to hide from the police, and how to stay alive. First, never enter a car with more than one person in it, and never let someone drive you out of the area. Get your money up front — Ms. Terry charges $50 or $100 — and try to work with a buddy.
“You look for weapons, you check the back seat, and you go by your vibes,” she said. “If they look strange, you stay away.”
There have been close calls, like the time a trucker locked her in and tried to rape her.
“I never did drugs and never worked for a pimp for protection,” she said. “What protection? If I’m in someone’s car, about to die, ain’t no pimp in there helping me.”
“I never carried a blade,” said Ms. Terry, who grew up in the Red Hook Houses in Brooklyn before her family moved to North Carolina for her teenage years. “My fists were my weapons. I learned to fight growing up with nine younger brothers.”
Ms. Terry said she completed two years of college, training to be a medical lab technician, but by the time she was 21, her husband had left her and she had two children to support. All she knew about prostitutes was what she saw on “Starsky & Hutch,” but she knew about the Hunts Point action and came out on her own. She admits she became addicted to the stimulation of the street life.
“I love the excitement of coming out here and seeing all these beautiful people I know,” she said. “Even my dates are a comfort. This place has made me strong. It keeps you young.”
But she has slowed down. A year ago, she was in a bad accident and was hospitalized with a broken jaw and neck injuries. Her children, two of whom she says she put through college, beg her to get off the street.
“I’m the mother, so they can’t say anything,” she said. “When I’m ready to get off, I’ll get off.”

Moors and Christians Festivals of Europe: WHITES in BLACKface portray MOORS in Europe