By DANIEL BATES IN NEW YORK
PUBLISHED: 11:01 EST, 1 September 2013 | UPDATED: 18:35 EST, 1 September 2013
Six British Army rugby players have been accused of beating up an off-duty New York policeman during a 4am bar brawl.
A court in Manhattan heard that the soldiers from the 1st Battalion of the Royal Regiment of Scotland allegedly punched the officer to the floor then carried on hitting him as his friend tried to stop them.
As the brawl carried on down the street, it left blood splattered along half a block until the officer pulled out a knife and slashed one of his attackers.
The men, who are all from Fiji but are based in Edinburgh, are part of an Army rugby team on a tour of the US East Coast.
They claimed that they lashed out when the policeman called one of them a ‘black b******’.
The court was told that when he identified himself as a policeman and ordered them to back off during the confrontation last Friday, they responded: ‘We don’t care. F*** the police.’ 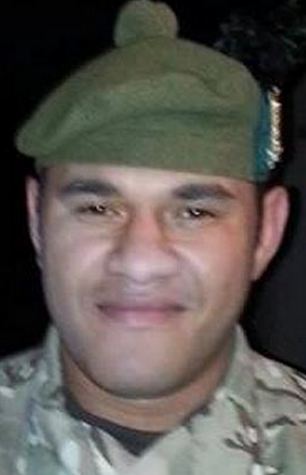 Assault charge: 34-year-old Private Felite Vunisarat is one of the soldiers who allegedly attacker the off-duty officer


The soldiers – Private Iliakini Raderua, 30, Corporal Thomas Shute, 34, Private Felite Vunisarati, 34, Private Mosese Kuruala, 27, and Private Joeli Raduva, 34 – are accused of third degree assault.
Lance Corporal Iosefo Yavala,  33, is also accused of second degree robbery, a more serious offence, after he was allegedly found carrying the officer’s mobile phone which was taken during the brawl.
The soldiers, whose regimental motto is No One Provokes Me With Impunity, were due to play against a team from the New York Police Department on Wednesday, but they are now being held in the notorious Rikers Island prison after failing to post bail of $25,000 (just over £16,000)
In court they stood next to each other dressed in white T-shirts and shorts or trousers.
Prosecutor Emily Logue said that the row began at the Mercury Bar in Manhattan when Yavala ‘bumped into the victim and began yelling at him’. 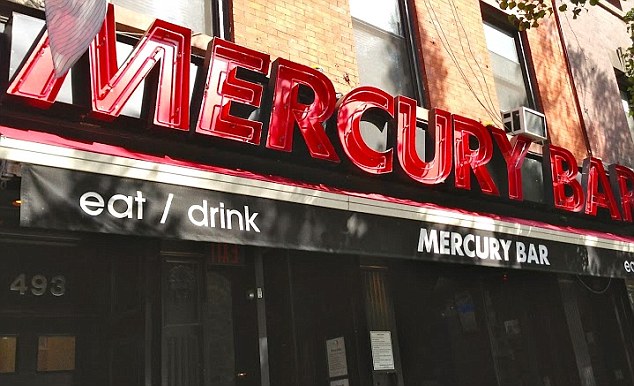 Fight scene: British soldiers are alleged to have assaulted an off-duty New York police officer outside the Mercury Bar in Manhattan


The group then allegedly ‘surrounded’ the officer and Kuruala ‘punched him in the face, causing him to fall down’ and the others rained down blows as his friend tried to help him up. 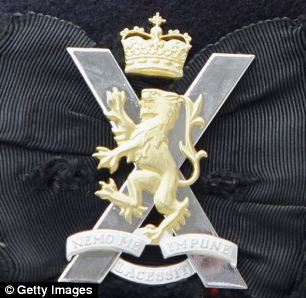 Regimental pride: The cap badge of the 1st Battalion of the Royal Regiment of Scotland

When the rookie policeman then tried to call the emergency number 911 on his mobile phone, one of the group punched him in the head and Yavala allegedly took the phone.
The officer then pulled out a knife and Yavala was cut.
Robert Fisher, defending Kuruala, said that the policeman ‘escalated’ the situation.
Seema Iyer, defending five of the soldiers, asked that they be released as they are ‘upstanding members of the armed services in their country’ with no criminal records.
It was revealed that Yavala has been in the Army for 11 years, Shute is a 12-year veteran and Raduva has served 13 years and is a decorated war hero who was Mentioned in Dispatches in 2011.
All six men will appear before the court again next week.
The captain of the rugby team, Captain Matt Stevens, said after the hearing that the rest of their tour was continuing.
A Ministry of Defence spokesman said: ‘All those who are found to fall short of the Army’s high standards will face disciplinary action, up to and including discharge.’

Eritrea Arican human trafficking by the PFDJ government to Sinai