Swimming and the Fear Factor


Annalyn Barbier’s daughter was 6 years old and a nonswimmer when she was invited to spend a week at a friend’s home, which had a pool. Ms. Barbier wanted her daughter to be able to save herself if she landed in the water. So Ms. Barbier, herself an avid swimmer, signed the child up for lessons at a high school near their Brooklyn home.
She had no idea how much her daughter feared the water. “She screamed and cried and absolutely refused to go,” Ms. Barbier recalled. “But I told her I paid for the lessons, so I’m going there to watch, and I walked out the door.”
Having never before stayed alone, the child followed, yelling “I hate you” and insisting that she would not get in the pool. But the instructor, who seemed to thrive on tough cases, took her and another equally terrified girl into the water together while Ms. Barbier sat where her daughter could see her.
Both children finished the course without further incident. Ms. Barbier said her daughter, who is now 14, likes to go in the water and can swim well enough to hold her own.
Like Ms. Barbier, I consider swimming an essential life skill, more important to survival than anything children learn in school. Even if children never go swimming, they should know how to swim, because they can fall into water at any time. There are water hazards everywhere — not just at public and private beaches and pools, but also at lakes, ponds, water parks and backyards equipped with so-called kiddie pools. 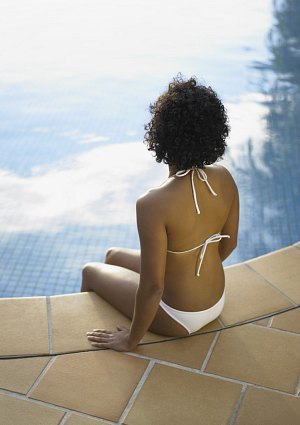 A small child can drown in just two feet of water. The Consumer Product Safety Commission has reported that from 2004 to 2006, 47 children died after becoming submerged in inflatable pools. A small child leaning over the soft side of such a pool can easily fall in headfirst and be unable to stand up quickly enough.
Even if drowning were not an issue, swimming is an activity that exercises the entire body and can be pursued throughout life. My 93-year-old aunt, Eleanor Diamond, who can barely walk, still swims laps several times a week in a pool across the street from the assisted living facility in which she resides.
Huge numbers of children are unable to swim, which largely explains why drowning is the second leading cause of death among children ages 1 to 19. Three years ago, the American Academy of Pediatrics updated its policy, reinforcing its advice that children ages 4 and older should learn to swimbut also noting that children ages 1 to 4 are less likely to drown if they have had formal swimming lessons.
Furthermore, very young children who are comfortable in water are likely to be easier to teach to swim when they are ready to learn formal strokes.
According to the USA Swimming Foundation, about 70 percent of African-American children, 60 percent of Latino children and 40 percent of white children are nonswimmers. Lack of access and financial constraints account only partly for these numbers. Fear, cultural factors and even cosmetic issues play a role as well.
“Before the Civil War, more blacks than whites could swim,” Lynn Sherr, the author of “Swim: Why We Love the Water,” said in an interview. “There are many stories of shipwrecks in which black slaves rescued their owners.”
But as Ms. Sherr learned from Bruce Wigo of the International Swimming Hall of Fame, segregation destroyed the aquatic culture of the black community. “Once whites discovered swimming, blacks were increasingly excluded from public pools and lifeguarded beaches,” Mr. Wigo told her.
As a result, many minority parents never learned how to swim. Adults who can’t swim often fear the water and, directly or indirectly, convey that fear to their children.
A second-grade teacher I know who takes her class to the local Y for swimming lessons said one mother refused to give permission for her son to go “because he’s afraid of the water.” The teacher rightly responded that was all the more reason the boy should join his class at the pool.
Cullen Jones, an Olympic gold medalist and record-setting swimmer, nearly became a drowning statistic at age 5 when he was thrown from his inner tube at a water park and remained submerged for 30 seconds. He was saved by resuscitation, after which his parents insisted that he learn to swim.
Through USA Swimming’s Make a Splash campaign, Mr. Jones, who is black, now tours the country encouraging minority children to learn to swim and convincing their parents of the importance of providing lessons.
Parents are not always the best teachers, especially for children who are afraid of the water, although a parent should be present and visible to the child during formal swimming lessons.
Try to find instruction best suited to your child’s comfort zone in water. A child who is very frightened or nervous around water may do poorly in a large class; a small class — or even better, individual attention, at least for the first few lessons — is likely to be more effective. Make sure the instructor knows of your child’s reservations.
Lessons commonly begin by teaching children not to be afraid of the water. They learn to get their faces wet, blow bubbles, lift their faces up and take a breath. They then learn to float and breathe properly while doing simple strokes like the dog paddle and backstroke.
But no matter how well a child learns, no child can be made “drown-proof,” said Dr. Jeffrey Weiss, the lead author of the pediatrics academy statement. In addition to learning to swim, children should be closely supervised when in the water.
It is up to parents to establish safety rules and precautions. Rule No. 1: Never swim alone. An adult who knows how to swim should always be present and paying attention to the child, not to a book or a phone. Even older children who are accomplished swimmers should be supervised or, at least, always with a buddy who is a strong swimmer.
The pediatrics academy says those who supervise children in the water should know how to perform cardiopulmonary resuscitation, just in case. It takes but half a minute for a child to lose consciousness.
Children should be taught never to roughhouse in water and never to hold another child underwater, however briefly. They should also know never to cry wolf — yelling for help for fun may mean no help arrives when it is really needed.