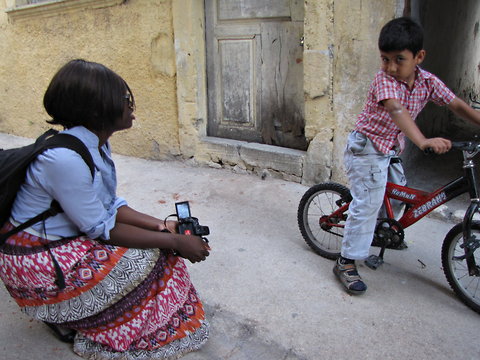 ANTAKYA, Turkey — When my University of Illinois journalism class was preparing to depart for a three-week reporting trip to Turkey, I wondered how my “African-ness” would come across to Turkish people. My parents are Nigerian immigrants, which makes me Nigerian-American. For most of my childhood, I’ve been in the minority. Most of the people in my hometown are Caucasian and most of my college friends in Urbana-Champaign, where our university is located, are white or Asian.

That being said, I rarely think about my race. There are times when I do think about my culture, like when I attempt to cook Nigerian food for my roommates. But I never really think about how my skin color is vividly different from most people around me.

Once I boarded the plane to Turkey, I was so preoccupied with finding Africans to interview for my articles on Nigerians in Turkey, I never really thought much more about how I would come across to Turkish people. In Istanbul, there were a few comments. At the Grand Bazaar, shopkeepers yelled “Chocolate” to get my attention, but I didn’t feel that I was considered any more of a spectacle than my blonde, blue-eyed classmates. However, when we traveled to Antioch, in southern Turkey, to learn about Syrian refugees along the border, it was a different story.

In the culturally diverse city, one woman pointed to me, to her own arms and face, and then back to my skin in amazement, as if she couldn’t believe that a human could be so dark. A little boy on the street stopped to stare at me for two full minutes. I tried to engage in a conversation about his bike with him, but he wasn’t having it.

The owner of a local art store assured me that people’s reaction was nothing to fear. “They are not racist,” he said, “Many of them rarely see someone of your color.”

And so, everywhere I went in Antioch people would stop to take my picture. And I don’t mean that they would just quietly snap a photo from across the street, although that happened as well.

People frequently asked, “Photo, photo please?” And before I could respond, I’d be in the middle of a big, extended family, or a group of posing wide-eyed teenagers. Once, while I was conducting an interview, a large group of people swarmed around me, demanding that my picture be taken with them. If you’ve ever wanted to know how George Clooney might feel in a star-struck town, I can tell you: exhausted. And a tad bit annoyed.

It felt strange. But to be fair, it was also understandable, and very civil. No one was disrespectful, but it was uncomfortable.

Instead of focusing on my discomfort, I tried to put myself in their shoes: If I saw someone so different from me for the first time, I’d give them a second glance, too.

To deepen their understanding of Muslim societies, nine journalism students from the University of Illinois are reporting from Turkey under the direction of Professor Nancy Benson and with the advice of the IHT’s Susanne Fowler. This post is part of their program.

South Carolina police: Mother won't tell them where son is