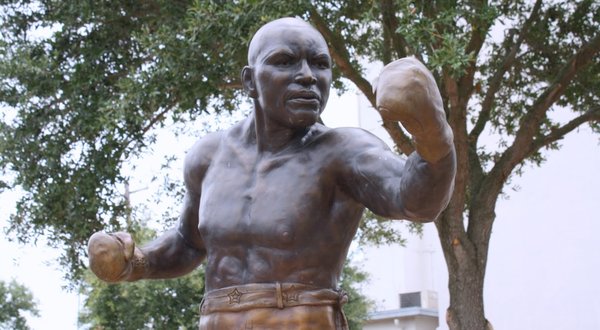 GALVESTON — Jack Johnson stood on a pedestal behind Old Central Cultural Center, ready to throw a left hook and then come back with a right.

On the grounds surrounding the life-size bronze statue of Mr. Johnson, the first black heavyweight boxing champion, workers dug trenches in preparation for the opening of what will be Jack Johnson Park, Galveston’s latest effort to reclaim its most famous son since turning its back on him a century ago.

The workers were asked if they are fans of Johnson.

“I hadn’t even heard of him until this project,” said another.

The lack of awareness is no surprise in this island community. Galveston has long wrestled with its relationship with the dockworker turned fighter who grew up at 8th and Broadway and went on to break down cultural barriers 50 years before the civil rights movement.

“What he overcame is so significant,” said Ken Burns, whose 2005 documentary about Johnson, “Unforgivable Blackness: The Rise and Fall of Jack Johnson,” spawned a campaign for a posthumous pardon for Mr. Johnson on a trumped-up violation of theMann Act.

The law, written to address the “white slave” hysteria, forbade the interstate transport of women for immoral purposes, and was curiously applied to Johnson because of his relationship with Belle Schreiber, a white prostitute, which took place before the law went into effect. “He felt that it was his right to live out the promise of the Constitution,” Mr. Burns said. “His approach was so fresh in its individuality.”

In 1910, Johnson easily defended his championship against James Jeffries, a k a the Great White Hope, a former champion who came out of retirement to, as the writer Jack London had urged, “remove the golden smile from Jack Johnson’s face.” That year, Galveston announced a homecoming parade in Mr. Johnson’s honor, but once it was learned that he would attend with Hattie McClay, a white woman, the festivities were canceled.

Since then, several efforts have been made in Galveston to pay tribute to the boxer. In the late 1980s, a statue was erected in Menard Park, but it was impressionistic and hard to identify as Mr. Johnson, and was razed after being damaged by the elements and riddled with bullets by vandals.

At the same time, 41st Street was renamed Jack Johnson Boulevard, but it is not a welcoming road. Also last year, the artist Earl Jones carved an image of Mr. Johnson from the stump of a tree ravaged by Hurricane Ike in 2008, but its significance was diminished by an outcry by some residents of the Oaks subdivision.

Not until Jack Johnson Park has there been a concerted effort to lionize Mr. Johnson.

“The city paid $150,000 to do this park” because some Galvestonians “want to apologize for what the city officials didn’t do back then,” Douglas W. Matthews, the coordinator of the project, said in a phone interview.

Mr. Matthews, Galveston’s former city manager, would seem an odd torchbearer for Johnson. Like Mr. Johnson, he was born and raised in Galveston, enjoyed athletic success (he was a star running back at Central High School), and was a standout in his career field (he was the first black city manager in Texas). But his approach was fundamentally different. Mr. Matthews worked his way through the system, while Mr. Johnson bucked it.

“Not all black people are proud of Jack Johnson,” Mr. Matthews said at the park site. “Some families don’t want him as a role model. They think he was an ‘uppity Negro.’ ”

But the boxer is an icon precisely because he refused to stay in his place. He drove fast cars, wore sharp suits and was a skilled musician. He spoke loudly and candidly, and wielded a mighty pen. As was conveyed by “Unforgivable Blackness,” he was way ahead of his time, making him a feared man in America.

“Johnson represented the perfect antihero because everyone was alienated by him pushing his freedoms,” said Casey Cutler, a white man with a mixed-race family who describes himself as a “citizen soldier for doing what’s right in Galveston.”

Mr. Cutler came up with the idea for Jack Johnson Park, inspired by the late Johnny Valentine, the longshoreman who advocated for Jack Johnson Boulevard and the Menard Park statue. When the Galveston Housing Authority sought public input on the rebuilding of the Magnolia Homes public housing development, which had been destroyed by Ike, Mr. Cutler, who lived near there for 30 years, promoted adding green parkland to the plan.

Some said it was not the right location for memorializing Mr. Johnson. Others said it would compromise how much public housing could be rebuilt. Ultimately, deep-seated politics won out and the plan was rejected. But Mr. Matthews took it to Old Central.

“The Jack Johnson Park and statue is not some linear equation,” Mr. Cutler said. “It is, at the very least, quadratic.”

Jack Johnson Park exists not just as a truce with the boxer but also as a way to empower Galveston to face its past as a slave market and embrace its present as a tourist destination. A park dedication is tentatively planned for October, and Muhammad Ali, who also pushed the envelope on civil rights and had his share of critics, is expected to attend.

“With enemies all around him — white and even black — who were terrified his boldness would cause them to become a target, Jack Johnson’s stand certainly created a wall of positive change,” Adrienne Isom, the Austin sculptor who created the statue, said in an e-mail. “Not many people could dare to follow that act.”