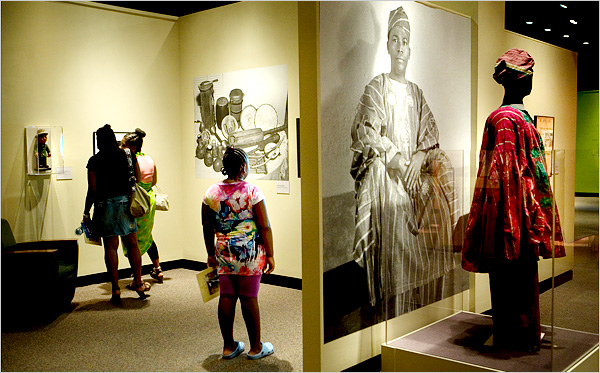 “Word, Shout, Song: Lorenzo Dow Turner, Connecting Communities Through Language” includes musical instruments and African costumes along with photographs, field notes, tape recordings and artifacts from the Turner collection at the Anacostia Community Museum. A related, Turneresque exhibition, “Grass Roots: African Origins of an American Art,” is on view at the National Museum of African Art.

WASHINGTON — Like many small-budget, education-intensive institutions, the Smithsonian’s Anacostia Community Museum here depends on the kindness of friends and strangers for certain kinds of support.

It had help from one of each for the exhibition “Word, Shout, Song: Lorenzo Dow Turner, Connecting Communities Through Language.”

The stranger was Lois Turner Williams, who in 2003 sent the museum 35 cartons packed with photographs, field notes, tape recordings and artifacts that had belonged to her husband, the African-American scholar and linguist Lorenzo Dow Turner. After his death in 1972 she had stored everything in her Chicago home. Now she was ready to pass it on.

Turner was one of the earliest scholars to suggest that traces of African languages and customs, brought across the Atlantic by slaves, survived in modern African-American culture. For 40 years he worked steadily and traveled widely to validate that proposition. The contents of the cartons added up to an archival history of an exceptionally active and focused life.

How to turn the archive into an exhibition? Enter a friend, a Brazilian-born museum volunteer named Alcione Amos. Her own research as an independent scholar was on the links between African-American and American Indian histories, and Turner was one of her intellectual models, making her, even with limited museum experience, a logical person to undertake the show.

She’s done a fine job. What might have been a dusty documentary exercise is instead a well-paced drama of ideas, one that goes beyond biography but still keeps Turner at the center. The show is short on art in the traditional sense, but Ms. Amos presents Turner’s career as a piece of art, a kind of ideal performance, judiciously shaped, assiduously polished, cleanly rounded off.

The opening gallery sets up the personal back story for the ideas to come, with family photographs, group pictures from Turner’s school years and snapshots of some of his own future students, among them Zora Neale Hurston.

He was born in North Carolina in 1890. When he was 6, his father, a teacher, abruptly left home under a threat of racist violence. Raised by his mother, supporting himself as a waiter, he acquired a first-rate education, earning an undergraduate degree from Howard University, a master’s degree in languages from Harvard and, in 1926, a doctorate from the University of Chicago, with a dissertation titled “Anti-Slavery Sentiment in American Literature Prior to 1865.”

Teaching appointments soon followed. The first was at Howard and the second at Fisk University in Nashville, where he helped set up the country’s first African Studies Program. The third and longest tenure was at Roosevelt College (now University) in Chicago, where he had the distinction of being the first African-American professor in the United States to be hired by a white college.

The subject of what would be his primary research had already come to him, early and accidentally. In 1928, during a summer-school teaching gig at South Carolina State College, he overheard two students speaking a dialect he couldn’t understand. When he asked around, he was told they were just using poor English. But he thought otherwise.

He traced the dialect to a community of African-Americans called the Gullah, who lived in relative isolation on the Sea Islands off the coast of South Carolina and Georgia. He suspected that what was spoken there was a Creole language with very old African elements. He was eager to know more, and his life’s work began.

In 1930 he started making trips to the islands to record Gullah speech. The only recording equipment then was a machine with the heft of a small mainframe. It must have been very difficult to lug it back and forth on small boats. But he made the recordings, and you can hear some of them: Gullah voices from 80 years ago, distant but clear.

Turner knew that to explore Gullah’s African component seriously he would have to learn African languages. So in 1936 he enrolled at the School of Oriental and African Languages at the University of London and learned several. In 1938, after he’d found reason to think that some Gullah were descended from Muslim slaves, he studied Arabic.

By this point he had already examined an intriguing manuscript written in Arabic script. It was thought to have belonged to a slave named Bilali Mohamed, who came from Guinea in West Africa to the Caribbean, then to a plantation on one of the Georgia islands. The manuscript, which is on loan to the Anacostia from the University of Georgia Libraries, isn’t exotic in content; it’s a transcription of a tract of jurisprudence. But its very existence led Turner to dig deep for African-Muslim elements in Gullah culture, and he found some, in both language and religious rituals like the Gullah circling dance called the ring shout.

In 1940 he expanded his research to Brazil, which had had a large influx of African slaves. Equipped with a less cumbersome voice recorder — it’s in the show, along with his language-customized typewriter — he positioned himself in the northeastern region of Bahia, where an African-inflected culture was particularly evident and vibrant.

He was fascinated by the Afro-Brazilian religion called Candomblé and took memorable photographs of one of its priestesses, Mãe Menininha do Gantois. And he was gratified to find that when he played his Gullah recordings for Candomblé practitioners, they recognized phrases from their rituals.

In 1949, having verified to his satisfaction that pre-slavery Africa lived on in the Americas, Turner published “Africanisms in the Gullah Dialect,” a book that would help pave the way for the field of African-American studies in the 1960s. Then he made one more major trip, to Africa itself.

He went on a Fulbright grant in 1951. In Nigeria, Benin, Togo and Sierra Leone, he talked to people, attended dance performances, listened to music and collected both costumes and a mini-orchestra of percussion instruments. He recorded Africans from various language groups and played his Gullah and Brazilian tapes for them, watching for listeners to register recognition of words.

Back in America, he lectured and taught almost to the end, and his influence continued. A contemporary video at the Anacostia offers a real-life performed version of the cultural bonds he had searched out. In the 1990s, an anthropologist named Joseph Opala associated a song sung by a Gullah woman on a 1932 Turner recording with a Mende funeral hymn performed by women in Sierra Leone.

Mr. Opala then located the Gullah singer’s daughter, who knew the song, and flew her to Africa, where she and a Mende woman singing the funeral hymn joined in a duet. In the video we see them discovering that different songs are identical and embracing like sisters.

And there’s a distinctly Turneresque exhibition, “Grass Roots: African Origins of an American Art,” at the National Museum of African Art here. It details the history of a tradition of coiled basketry that originated in West Africa and was carried by slaves to the American South, where variations were produced, including the sweet grass baskets that have long been a Gullah specialty: objects once made for use, later collected as art, and always containers of cultural memory.

Ms. Amos’s exhibition is also a container of memory, personal, cultural and intellectual. And it is something else, simpler and more abstract: a moral lesson, an edifying tale about the art of humane attentiveness and of looking at the overlooked.

A version of this review appeared in print on September 3, 2010, on page C20 of the New York edition.