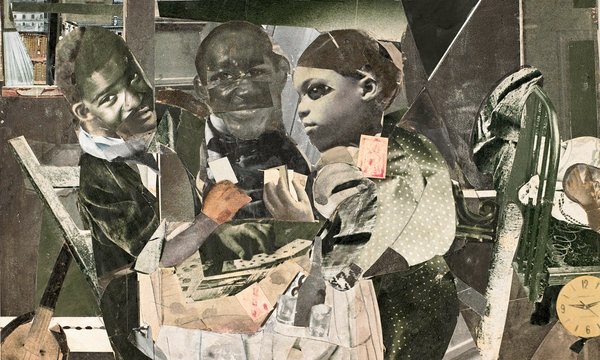 A photograph in the catalog for “Romare Bearden: Southern Recollections” at the Newark Museum shows the artist standing in front of an enormous bookshelf in his studio in Lower Manhattan. It’s an incongruous image, in many ways, for an exhibition that celebrates, as the catalog says, the artist’s “deep and abiding connection to his birthplace, Charlotte, North Carolina, and to the South,” and which includes paintings and collages depicting cotton workers, landscapes and other scenes from his native Mecklenburg County, N.C.

On another level, however, the photograph appropriately posits Bearden as a master at merging incongruities: New York intellectual culture with the rural South; the competing lineages of European Cubism and American social realism; and modernism with civil rights-era protest art.

Bearden himself was a contradiction. Born into a middle-class, educated family, he chose subjects for many of his paintings and collages that represent a life of agrarian toil. An early trauma came in 1914, when the artist was 3. Walking one day a few blocks from his family’s grocery store, Bearden, who was light-skinned, with curly blond hair, was nearly snatched by a white mob from his darker-skinned father. Shortly after that, the family migrated north to Harlem, and Bearden’s South became, as he put it, “a homeland of my imagination.” One essay in the catalog argues that over the next 45 years, Bearden in his art “returned to family scenes that he could not possibly remember.” 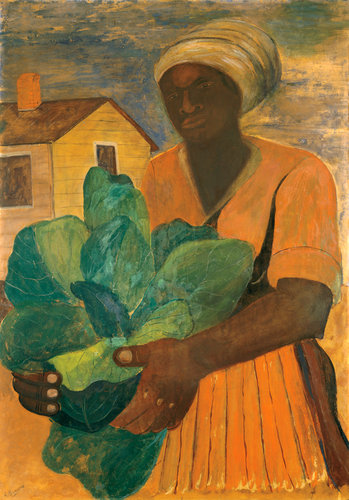 Beyond this North-South bifurcation, the earliest paintings here also reflect the extraordinary variety of artistic heritages Bearden was exposed to as a young man. Paintings like “Untitled (Harvesting Tobacco)” (circa 1940) and “Untitled (Husband and Wife)” (circa 1941) feature large, full-bodied figures like those of George Grosz, the German-born émigré painter who was Bearden’s mentor at the Art Students League in the early 1930s and who encouraged Bearden to look at Dutch and Flemish painting. “The Family” (circa 1941), with its horizontal orientation and multiple figures, is reminiscent of the Mexican muralists, who were influential in New York in the 1930s. “Presage” (1944) displays the fragmentation of forms that was the hallmark of Cubism. 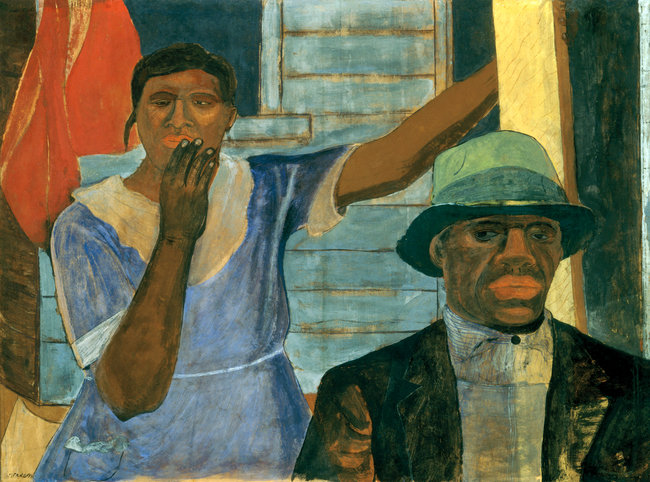 Bearden started working as a political cartoonist — it was Grosz who persuaded him to switch to “fine” art — and the paintings here were created around the same time that he wrote essays like “The Negro Artist and Modern Art” (1934) and “The Negro Artist’s Dilemma” (1946). But Bearden’s greatest contribution as an artist came in the area of collage, which was pioneered by Picasso and Georges Braque as a Cubist experiment, but expanded as a form of social and political critique by German Dadaists like Grosz, John Heartfield and Hannah Hoch.

Collages like “Fish Fry” (1967) and “House in Cotton Field” (1968) show Bearden using European techniques — cutting out images from magazines and other sources and arranging them into complex compositions — to depict what he called the “homeland of my imagination.” The flat planes of bright color recall late Matisse, and the eerie stillness of his American fields resembles that of Joan Miró’s Surrealist Spanish landscapes. And the impact of Surrealism is present in “Untitled (Girl in a Pond)” (1972), which uses a technique attributed to Max Ernst: “frottage,” or placing a piece of paper over a surface and then rubbing it with pencil or crayon.

It is impossible, however, to ignore the long shadow of Picasso over Bearden’s oeuvre, a source that may seem surprising at first, since Picasso was the ultimate modernist — hence, a paragon of white, European culture. And yet, Picasso was a southerner, a dark Spaniard who spent the bulk of his adult life in France — and, more important, revered African art. In his writings, Bearden mentioned the impact this had on African-American artists, that Europe’s “greatest” painter looked to African art to achieve his biggest breakthroughs. Bearden’s work is peppered with Picasso-isms: a guitar here, a bull there. But one collage, “Mother and Child” (circa 1976-77), makes the connection even more explicit, with a small cutout photograph of an African mask.

What Bearden himself added to the idiom of collage was that he began in the 1960s to photograph and enlarge the cutout components of his works, or to create collages and then photograph them and enlarge the prints to nearly mural-size compositions. Often these collages were done in black and white, which added a stark, somber element to a body of work made during the social upheavals of the ’60s. (The works also recall a period of painting in the late ’40s when black and white was the favored palette for existentially minded postwar painters like Willem de Kooning, Jackson Pollock andFranz Kline.)

“Evening, 9:10, 461 Lenox Avenue” (1964) takes a location in Harlem, rather than the South, as its title. The work was also made a year after Bearden founded a collective called Spiral, for African-American artists in Lower Manhattan, in response to the civil rights movement. “Mysteries” and “Train Whistle Blues No. 1” (both 1964) are also excellent examples of this black-and-white work and recall the 20th century’s most famous grisaille (shades of gray) — as well as protest — painting: Picasso’s mural-size“Guernica” (1937), made in response to a bombing during the Spanish Civil War.

Even with the exhibition’s focus on Bearden’s complicated Southern heritage — one that was shared by millions of African-Americans who migrated north, and the inspiration for “The Migration Series” of paintings (1940-41) by Jacob Lawrence — you get a strong survey of the artist’s oeuvre and its arc. The only quibble one might have is a common one for solo or monographic shows: there is too much work here to absorb in one viewing. A single collage by Bearden contains a world of information, sources and references, and by the time you reach the end of this show, your eyes and brain are exhausted.

Pastor Juanita Bynum confesses to having been with women sexually