As a funeral director in Harlem for more than six decades, George Bernard Benta delivered his personal brand of service for luminaries like Langston Hughes, James Baldwin, Paul Robeson, Etta Jones, Coleman Hawkins, Gil Noble and Alvin Ailey.
He also tended to other well-known people after they died, including Wesley A. Williams, the first black lieutenant in the New York Fire Department; Richard Parrish, a leader in the freedom school movement; and, Kenneth B. Clark, the psychologist whose research helped overturn racial segregation in the nation’s public schools.
But Mr. Benta made sure to treat everyone — celebrities, politicians and blue-collar workers alike — with dignity and respect. And he did it with his distinctive reverence and polish.
“He liked to do things that were flashy, that no one else was doing,” said his former daughter-in-law, Dorrence Benta, a member of the.family business. 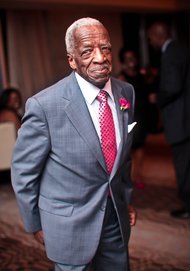 George Bernard Benta, who died at 91 on Jan. 3, was the owner of Benta’s Funeral Home, a Harlem institution.

Beyond the standard hues, he offered families a choice of colorful hearses to transport their loved ones. They could pick gold, green or red. And they could have a coffin to match.
During viewings and services, Mr. Benta and his staff wore elegant suits, with pinstripes, long coats and gray gloves as they went about memorializing the dead and consoling families.
Mr. Benta, who died on Jan. 3 at the age of 91, was a stickler when it came to conduct, his family said. Something he would always say was printed on the back of his funeral program: “God gave us two ends: one to sit on; one to think with. Success depends on which one you use. Heads you win, tails you lose.”
If someone left the light on he would let the staff know: “My name is George Benta, not Thomas Edison.” If he spotted a paper clip on the floor, he would wonder how it was that he was the first to see it and pick it up.
His other philosophy: Cater to the deceased, but do not forget the living.
Mr. Benta incorporated techniques from the hospitality industry. Benta’s Funeral Home, which opened in 1928 and is among the oldest in Harlem, offers families a private room to gather themselves . Mr. Benta ran the business 24 hours a day, seven days a week, and on holidays. If no one answered the phone at the front desk, the call was automatically forwarded to Mr. Benta’s home and then to the homes of his three children.
He was a fastidious dresser, known to wear ascots and tams, and to always have a handkerchief tucked in his suit’s breast pocket. “He was the only one I knew who could pull off some plaid pants, and make it look stylish,” Ms. Benta said. And his charisma could fill a room, she said. When he could not recall a name, he would address men “Hey, guy,” and women as “pumpkin.”
If clients did not have the money to pay for services, Mr. Benta would try to work out some sort of arrangement. Sometimes they ended up paying nothing at all.
Mr. Benta was born in Harlem in 1921. His father had moved there from Antigua, and, by family accounts, was a stern and proper man. In one story, Mr. Benta told his family how his father would leave the house every day wearing a crisp suit for his job at the post office. One day when he forgot something, Mr. Benta took it to him, and stood staring at his father in shock. There he was, running around, sorting mail, not in his suit, but in a Postal Service uniform.
“I always remembered that story,” said his granddaughter Whitney Gayle Benta. “The pride his father had. You had to take that much care in your appearance, so you could get respect.”
Mr. Benta’s father went to mortuary school and opened a funeral home in the family brownstone. Mr. Benta eventually joined the business, and persuaded his father to expand.
They eventually bought a six-story building on St. Nicholas Avenue near 141st Street. The funeral home operated on the ground floor, and the family lived in one of the 40 apartments above it.
For Mr. Benta’s service, some 700 programs have been printed. His grandson Jason Benta booked a jazz band to play at the viewing on Wednesday at the funeral home that he made into a neighborhood institution.
And on Thursday, at an Episcopal church in Harlem, his family will do for him what he had done for so many.