January 8, 2013, 12:30 pm
By PHILIP W. MAGNESS
By late 1862 Washington was abuzz with talk of colonization. Bolstered by a $600,000 appropriation from Congress over the summer, Abraham Lincoln prepared a contract to resettle African-Americans in Panama and openly pitched the scheme to a free black delegation at the White House on Aug. 14. Few were surprised when Lincoln pledged to see colonization through in the preliminary announcement of his Emancipation Proclamation on Sept. 22, but a lingering question remained. Lincoln stipulated that all colonization was to be voluntary, though as of yet few had indicated an interest or willingness to go.
Not long after the Panama scheme was announced, Postmaster General Montgomery Blair endeavored to warm Frederick Douglass to the policy, though the famed orator and pamphleteer was having none of it. He used the September issue of his newspaper to fire a broadside against the president’s “colonization address” a few weeks prior. “Mr. Lincoln,” Douglass charged, “assumes the language and arguments of an itinerant Colonization lecturer, showing all his inconsistencies, his pride of race and blood, his contempt for Negroes and his canting hypocrisy.”
As Douglass’s statement revealed, significant skepticism abounded in the black community. At its most generous interpretation, colonization was a paternalistic attempt to end slavery by separating the races; at its worst, an overt act of bigotry. Yet as recent scholarship has revealed, it provoked a frank discussion within the free black community over the prospects of a just and equitable future in the United States. Indeed, some blacks accepted the president’s overtures — not for any trust of their motive but rather to escape the uncertain and potentially violent future of the post-slavery United States.
A neglected though important figure in this discussion quickly emerged in the person of John Willis Menard, a free black abolitionist from Illinois who relocated to Washington in 1861 and quickly became one of Douglass’s main interlocutors on the subject of colonization. Little is known of his early life, except that he was born of free black Creole parents in the frontier town of Kaskaskia, Ill. He may have been the grandson of Pierre Menard, an early settler of the state who served as its first lieutenant governor. Notably, he received a formal education – rare for both white and black settlers on the Midwestern frontier – and was admitted to Iberia College, a small Christian school in Ohio that was among the only institutions of higher education to accept black students. 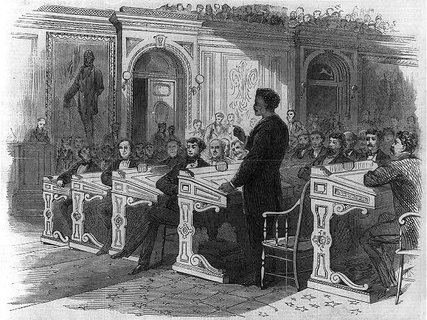 Ossian Sweet: defended his family against a white mob attempting to force them out of the neighborhood

Founded by slaves in 1863, Shiloh Baptist Church rises from the Yorktown contraband camp