In Harlem, Paula Shaw-Leary talks of her youngest, Matt, who got his college degree in May and was accepted to graduate school, a soulful-eyed young man with a broad nose and an impish sense of humor.

“Nobody can make friends laugh like Matt,” Ms. Shaw-Leary says. “They are walking in circles waiting for him to come back.”

In the northeast Bronx, Cassell Brooks, a car service driver, sits on a stoop and talks of his son Kemar: a swift runner, a gifted tennis player, an A student with the certificate to prove it. “A classic boy,” Mr. Brooks says in his rich Jamaican baritone, his smile wistful. “A classic.” 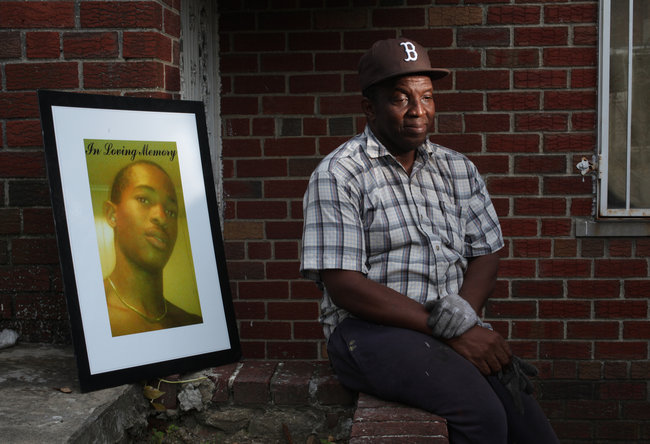 Cassell Brooks, with a picture of Kemar Brooks, 14, the youngest of his three sons, in the Bronx. Kemar was killed by a random bullet in July. He had just finished playing tennis in Haffen Park.

One night in early July, Matt grew restless and stepped outside to talk with old friends on 128th Street and swap a few jokes. One night in late July, as Kemar played tennis in Haffen Park, a thunderstorm cracked and flashed. He turned to sprint the 80 yards back to his family apartment.

A bullet fired mistakenly at Matt, 21, struck him in the back; a random bullet struck Kemar, 14, in the head. Both died.

And parents are left with holes in their hearts that will never heal over.

Ms. Shaw-Leary leans across her couch and touches the urn that holds Matt’s ashes; a Yankees cap and a Snickers bar sit on top. “Matt always told me, ‘Don’t worry, I’m going to do a lot of stuff in my life, I’m young!’ ” Ms. Shaw-Leary recalls. “And he was right — he was so young.” 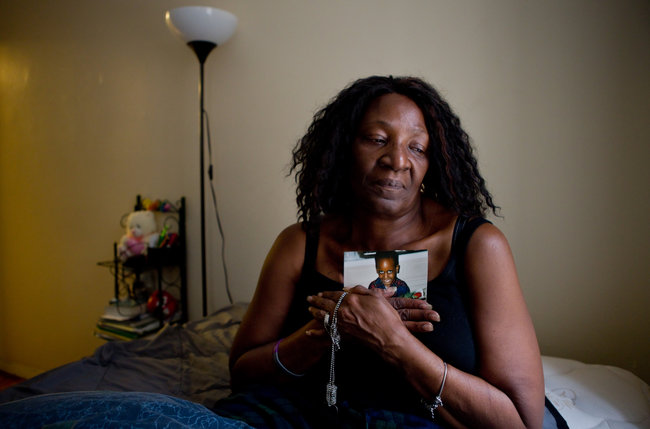 Paula Shaw-Leary wept in the bedroom of her son, Matt Shaw, 21, in Harlem. Matt, the youngest of seven children, had graduated in May from college with a finance degree. He was killed by a random bullet in July as he was talking with friends.

We celebrate New York City as the safest big city in America. We talk of new parks, restaurants, theaters, food festivals and tourists’ piling on in. If you are lucky enough to live in the right upper-middle-class neighborhood, housing values float upward.

That is a reality of this city.

As is this: New York has experienced a summer of shooting, bullets ripping through young backs and spleens, exploding chests and filling lungs with blood. A 4-year-old girl took a bullet and died, as did a young boxer in Brownsville. Just last week, a 9-year-old boy was struck in the leg as he walked down Walton Avenue in the Bronx with his mother.

It is so easy to demand that the police do more, but that’s silliness. For 20 years, the police and mayors have tightened gun laws and labored to remove semiautomatics and AK-47s, often called slammers. But the flood tide of armaments keeps running in.

Dub City, Hood Starz, 280, Wave Gang — the members of these gangs are so many Billy the Kids in do-rags, posting YouTube videos of beat-downs and sending texts like this intercepted by the police last week: “I just cop dis slammer and dyin’ to use it.”

And too many parents embrace cluelessness like an old friend.

That was not the reality for Matt and Kemar. “My daughter Princess called me Sergeant Strict,” Ms. Shaw-Leary says. “I still set the Cinderella curfew for the older ones: You’re in by midnight or I’m calling you.”

Ms. Shaw-Leary is a Jamaica-born force of nature, her black curls surrounding a mouth that can light up like a many-megawatt beacon. She laid down a rule for her seven children: No marriages and no children before you get a college degree. Her next youngest, Princess, is working on a master’s at Fordham.

In wintertime, Ms. Shaw-Leary patted her sons’ coats. “I like stop-and-frisk,” she says. “I stop and frisk my own kids! I tell Matt, ‘If a police officer stops you, don’t get macho. They are doing their jobs.’ ”

She leads me to his room, where his SpongeBob doll sits near his favorite gold sneakers. She keeps his television on, tuned to “Sports Center” on ESPN.

“It’s his favorite television show,” she says. “He loves it.”

Ms. Shaw-Leary and Mr. Brooks speak of their boys like this, present tense becoming past becoming present again. Your child does not go easy to the grave.

Ms. Shaw-Leary knew violence lurked. Matt was killed on 128th Street, which had been renamed Cheyenne Baez Way, after a soft-eyed 17-year-old girl who was killed by a stray bullet in 2010. So she persuaded Matt to stay with a sister in Atlanta after he graduated.

“I was at peace for a month,” she says. “I begged him to stay. He told me he missed my cooking. I told him ‘I’ll teach you how to make ziti on the telephone.’ ”

Mr. Brooks was a laborer in Kingston, Jamaica; he left for America two years ago. He found an apartment in a working-class neighborhood just yards from Haffen Park. He was struck by how peaceful it seemed. Then he sent for Kemar. “We shared the great American dream,” he says.

Kemar enrolled in high school. He ran track, but tennis was his true love. He beat even adults.

That July night, Mr. Brooks searched for Kemar in the rain. At 5 a.m., he found his son lying on the ground, his tennis racket beside him.

“I came from a broken home. I didn’t get a proper education. My dreams were crushed,” Mr. Brooks says softly. “This child, my God, with luck, he would have surpassed us all.”

The doctor led her into the room where Matt lay. She caressed his head, spoke softly into his ears and, with her hands, closed her son’s eyes forever.

Two young sons of New York, lost to its violence.

How Slavery Shaped America's Oldest And Most Elite Colleges