From Vladimir Duthiers, CNN
June 6, 2013 — Updated 1231 GMT
(CNN) — He was just a young boy — long before he became one of Africa’s all-time football greats and racked up trophies in Europe’s top competitions — when Abedi Ayew first heard people comparing him with arguably the game’s best player — Brazil’s Edson Arantes do Nascimento, also known as Pele.
Yet, there was just one problem for the young Abedi, who grew up in a poor Ghanaian village and shared a home with his 18 siblings. He didn’t know who Pele was.
“You imagine that we don’t have access to televisions, we don’t have lights in our villages; we were closed in the very small village so we didn’t have access to all these things,” he explains.
“So for me, playing behind our modest windows and any small places we would get, we tried to play football. And then you see people who are a little bit older than you saying, ‘oh Pele, he plays like Pele.'”
That nickname followed the attacking midfielder all the way from the red dirt fields in Ghana to some of the world’s biggest football stages, including the 1993 Champions League final where he helped lead the French club Olympique de Marseille to its first ever European championship.
Like his namesake, the Ghanaian “Pele” displayed a nimble athleticism on the pitch, dazzling defenders with his spectacular technique and blistering pace. He signed his first contract in 1978 with Ghana’s Real Tamale United but it wasn’t long before he attracted the attention of foreign scouts, becoming a pioneer for African football at a time when few players from his continent enjoyed major international careers.
He spent several years honing his talent abroad — including spells in teams in Qatar and Benin — before heading to France to play in the country’s second division.
In 1987, he made his move to France’s top league after being signed by Marseille. 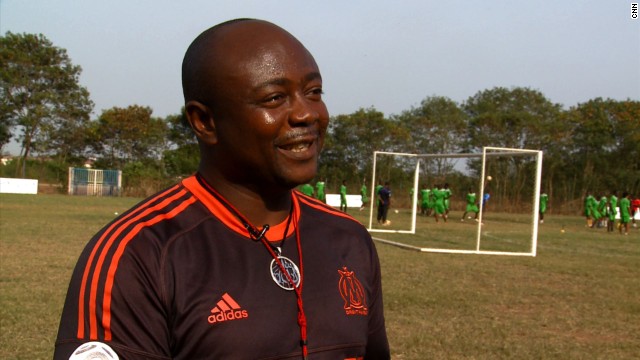 But his first spell at the club in the south of France proved to be a short one as Ayew grew frustrated with the racial abuse he suffered from his teammates.
“I started playing with them and three weeks later I called my manager and told my manager ‘look, I would like to change club because I wasn’t accepted by the players,” he reveals. “Any time they see me passing, they spit on the ground… [and say things like] ‘go back to where you come from, go back to the bush.'”

I felt proud because every footballer’s dream is to win a Champions League.
Abedi “Pele” Ayew, Ghanaian footballer

The Ghanaian star left Marseille after just one year and began playing for rivals Lille. But his excellent performances in his new team made Marseille’s club president realize what he had lost and try to sign him back again.
Ayew was initially reluctant to play again for his former club but was eventually convinced by his wife who urged him to “go and prove to them that you are the best.” So in 1990 he rejoined Marseille, where he enjoyed three golden years, culminating in the 1993 Champions League triumph over mighty Italian giants AC Milan.
“I felt proud because every footballer’s dream is to win a Champions League,” says Ayew. “Having the opportunity to be one of the first African players to win is huge and I think I was just happy.”
A champion in Europe, Ayew was also the heart and soul of Ghana’s national team, which he captained for six years, starting in 1990. During his 16-year career with the Black Stars, he scored 33 goals in 67 appearances and played in a record five Africa Cup of Nations.

Ayew, who’s seen three of his sons following his footsteps by playing professional football, ended his career with Al Ain the United Arab Emirates in 2000.
But his passion for football remains unquenched. These days, Ghana’s football legend spends his time and money coaching and mentoring young players. Beyond the fundamentals of sport, he also tries to prepare them to face some of the challenges he overcame.
“We just try to … ensure that they have a better career but it’s not easy,” he says. “It’s not everybody who is going to be a very good footballer or to have a professional career.
“So what we try to do is we teach them how to be in a society and that is very important — even if you don’t succeed in the football pitches, outside you can live within the society and I think that needs a whole lot of respect and discipline.”
http://edition.cnn.com/2013/06/06/sport/abedi-pele-ayew-ghana-football/index.html

Research Concludes US Offers Less Economic Mobility than Canada, Much of Europe