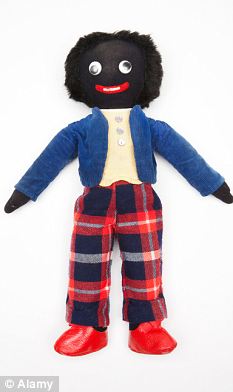 A race row has erupted in Australia over the popular return of golliwog dolls to tourist shops in Queensland.

The black-faced dolls, imported from China by an Australian firm, have begun appearing in tourist and novelty shops in resorts north of Brisbane – and Aboriginal elders are furious.

Mr Bob Weatherall, chairman of the Centre for Indigenous Cultural Policy, said the dolls were ‘offensive’ and should be banned.

‘It doesn’t bring unity within a community,’ he told Brisbane’s Courier Mail.

‘It doesn’t bring back equity.’

Golliwog dolls have been widely condemned as racist and campaigns have succeeded in their removal from the public eye, particularly in Britain, the U.S. and Europe.

But they have begun to make a comeback in Australia, with stores in Queensland reporting strong sales, particularly to older people who are reminded of dolls from their childhood.

It is believed several Australian companies began importing the golliwog dolls – they are also known as gollywogs – after they were made available on a Chinese website.

One Australian website offered the dolls for sale at about £10 each and provided background information on the history and meaning of golliwogs.

Many of the purchasers are buying them as special gifts for their grandparents, who would remember the dolls well.

Store owner Deanne Edwards, who sells about 20 golliwogs a week at her store in the resort town of Hervey Bay, said: ‘We absolutely love them. The kids love them, I love them.’

And Miss Hayley Whitford, who has a store in the seaside town of Caloundra, said that for a lot of older buyers the dolls were something from their childhood.

An Australian biscuit firm, Arnotts, used to have a chocolate biscuit called a golliwog but it was renamed Scalliwag and eventually discontinued in the 1990s.

‘We absolutely love them. The kids love them, I love them’

Golliwogs were created by Florence Upton who was born in New York to English parents in 1873.

Just how she came up with the name has various explanations but it is believed she altered the Pollywog, a dialect word meaning ‘wiggle head’ like in the movement of a tadpole.

Others have suggested the name comes from the word ‘Golly’ because of the surprised look on the doll’s face.