Africa Addio is a 1966Italian documentary about the end of the colonial era in Africa. The film was released in a shorter format under the names “Africa Blood and Guts” in the USAand “Farewell Africa” in the UK. The film was shot over a period of three years by Gualtiero Jacopetti and Franco Prosperi, two Italian filmmakers who had gained fame (along with co-director Paolo Cavara) as the directors of Mondo Cane in 1962. This film ensured the viability of the so-calledMondo film genre, a cycle of “shockumentaries”- documentaries featuring sensational topics, which classifications largely characterize “Africa Addio”.

The film includes footage of the Zanzibar revolution, which included the massacre of approximately 5,000 Arabs in 1964 (estimates range up to 20,000 in the aftermath), as well as of the aftermath of the Mau Mau Uprising in Kenya.

Allegations of staging and inauthenticity

There remains controversy over whether all the sequences in the film are real or whether some were staged or reenacted. Jacopetti has stated that all images in the film are real and that nothing was ever staged.  In the documentary “The Godfathers of Mondo”, the co-directors stated that the only scenes they ever staged were in Mondo Cane 2.
Roger Ebert, in his review of the film, cited several scenes that he found suspect, including one showing white Boers leaving Kenya in cattle-drawn wagons to return to Southern Africa. Ebert wrote that “real Boers (there are a few among the mostly British white population in Kenya) would probably call up a moving van for their furniture and then fly down to the Cape.” He also noted a part of the film lamenting how thousands of hippopotamuses were taken from the Zambezi River to provide food, retorting that hippopotamus meat is not eaten in that area.
Co-director Gualtiero Jacopetti was accused of murder and tried in Italy due to accusations that one of the executions which appears in the film was staged for the camera. He was acquitted.

Backlash against the film

The film has appeared in a number of different versions. The Italian and French versions were edited and were provided with narration by Jacopetti himself. The American version, with the explicitly shocking title “Africa: Blood and Guts”, was edited and translated without the approval of Jacopetti. Indeed, the differences are such that Jacopetti has called this film a betrayal” of the original idea. Notable differences are thus present between the Italian and English-language versions in terms of the text of the film. Many advocates of the film feel that it has unfairly maligned the original intentions of the filmmakers. For example, the subtitled translation of the opening crawl in the Italian version reads:

“The Africa of the great explorers, the huge land of hunting and adventure adored by entire generations of children, has disappeared forever. To that age-old Africa, swept away and destroyed by the tremendous speed of progress, we have said farewell. The devastation, the slaughter, the massacres which we assisted belong to a new Africa– one which if it emerges from its ruins to be more modern, more rational, more functional, more conscious- will be unrecognizable.

“On the other hand, the world is racing toward better times. The new America rose from the ashes of a few white man, all the redskins, and the bones of millions of buffalo. The new, carved up Africa will rise again upon the tombs of a few white men, millions of black men, and upon the immense graveyards that were once its game reserves. The endeavor is so modern and recent that there is no room to discuss it at the moral level. The purpose of this film is only to bid farewell to the old Africa that is dying and entrust to history the documentation of its agony”

“The old Africa has disappeared. Untouched Jungles, huge herds of game, high adventure, the happy hunting ground- those are the dreams of the past. Today there is a new Africa – modern and ambitious. The old Africa died amidst the massacres and devastations we filmed. But revolutions, even for the better, are seldom pretty. America was built over the bones of thousands of pioneers and revolutionary soldiers, hundreds of thousands of Indians, and millions of Bison. The new Africa emerges over the graves of thousands of whites and Arabs, and millions of blacks, and over the bleak boneyards that once were the game reserves.

“What the camera sees, it films pitilessly, without sympathy, without taking sides. Judging is for you to do, later. This film only says farewell to the old Africa, and gives to the world the pictures of its agony.” 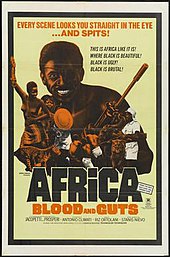 Poster for Africa Addio in its 1970 U.S. release as Africa Blood and Guts

Various cuts of the film have appeared over the years. IMDb lists the total runtime as 140 minutes, and a ‘complete’ version currently offered online via Google Video runs closest to that at 138 minutes, 37 seconds. This is an Italian-language based version, with a clear soundtrack and legible English subtitling.
IMDb lists the different runtimes for previously-released versions: USA- 122′; Norway- 124′; and Sweden- 116′. An English-language version currently released by Blue Underground runs 128 minutes. The film was released as “Africa Blood and Guts” in the USA in 1970, at only 83 minutes (over 45 minutes removed in order to focus exclusively on scenes of carnage); according to the text of the box for the Blue Underground release, directors Jacopetti and Prosperi both disowned this version. An R-rated version runs at 80 minutes.
The documentary was written, directed, and edited jointly by Gualtiero Jacopetti and Franco Prosperi and was narrated by Sergio Rossi (not to be confused with the fashion designer of the same name). It was produced by Angelo Rizzoli.

Film critic Roger Ebert, in a scathing 1967 review of the (unauthorised) American version of the film, calls it “racist” and claims that it “slanders a continent”. He notes the opening narration and subtitles:

“Europe has abandoned her baby,” the narrator mourns, “just when it needs her the most.” Who has taken over, now that the colonialists have left? The advertising spells it out for us: “Raw, wild, brutal, modern-day savages!” 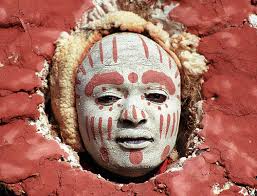 Slavery Alive and Well in Mauritania

Dispatches from an unfinished African revolution in Zimbabwe