A recent study by the University of Cape Town suggests that one woman in three in South Africa bleaches her skin. The reasons for this are as varied as the cultures in this country but most people say they use skin-lighteners because they want “white skin”.
Local musician Nomasonto “Mshoza” Mnisi, now several shades lighter, says her new skin makes her feel more beautiful and confident.
She has been widely criticised in the local media and social networking sites for her appearance but the 30-year-old says skin-bleaching is a personal choice, no different from breast implants or a having nose job. 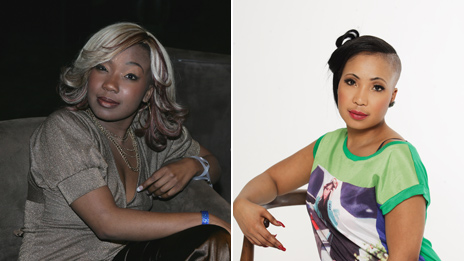 Nomasonto Mnisi says her skin colour is “a self-esteem issue”

Over the past couple of years Ms Mnisi has had several treatments. Each session can cost around 5,000 rand (£360; $590), she tells the BBC.
Unlike many in the country, she uses high-end products which are believed to be safer than the creams sold on the black market but they are by no means risk-free, doctors say.

Costly beauty
Ms Mnisi says she does not understand the criticism about her new appearance.

“Yes, part of it is a self-esteem issue and I have addressed that and I am happy now. I’m not white inside, I’m not really fluent in English, I have black kids. I’m a township girl, I’ve just changed the way I look on the outside,” she says.

The dangers associated with the use of some of these creams include blood cancers such as leukaemia and cancers of the liver and kidneys, as well as a severe skin condition called ochronosis, a form of hyper-pigmentation which causes the skin to turn a dark purple shade, according to senior researcher at the University of Cape Town, Dr Lester Davids.
“Very few people in South Africa and Africa know the concentration of the toxic compounds that are contained in the products on the black market and that is concerning. We need to do more to educate people about these dangerous products,” says Dr Davids.
He says over the past six years there has been a significant increase in the number of skin lighteners flooding local markets, some of them legal and some illegal. This is what prompted their research.
Local dermatologists say they are seeing more and more patients whose skin has been damaged by years of bleaching – most of the time irreversibly.
“I’m getting patients from all over Africa needing help with treating their ochronosis. There is very little we can do to reverse the damage and yet people are still in denial about the side-effects of these products,” says Dr Noora Moti-Joosub.
In many parts of Africa and Asia, lighter-skinned woman are considered more beautiful, are believed to be more successful and more likely to find marriage.
The origin of this belief in Africa is not clear, but researchers have linked it to Africa’s colonial history where white skin was the epitome of beauty.
Some have also suggested that people from “brown nations” around the world tended to look down upon dark-skinned people.

‘I don’t like black skin’
The World Health Organization has reported that Nigerians are the highest users of such products: 77% of Nigerian women use the products on a regular basis. They are followed by Togo with 59%; South Africa with 35%; and Mali at 25%. 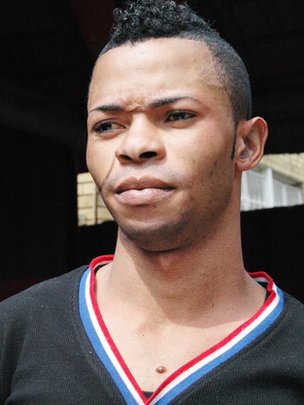 South Africa banned products containing more than 2% of hydroquinone – the most common active ingredient in in the 1980s. But it is easy to see creams and lotions containing the chemical on the stalls here. Some creams contain harmful steroids and others mercury.
While skin-lightening creams have been used by some South Africans for many years, they have become more common recently with the influx of people from countries such as Nigeria and Democratic Republic of Congo, where they are even more widespread.
In a bustling African market in the centre of Yeoville in Johannesburg, it is skin lighteners galore.
Walking through this community is like walking through a mini-Africa: you can find someone from any part of the continent here.
I notice that many of the women have uncharacteristically light skin faces while the rest of their bodies are darker.
Some even have scabby burns on their cheeks from the harmful chemicals used to strip the skin of pigmentation.
They don’t want to speak openly about why they bleach their skin, or even have their pictures taken.
Psychologists say there are also underlying reasons why people bleach their skin – but low self-esteem and, to some degree self-hate, are a common thread.
But skin-lightening is not just a fascination and obsession of women. Congolese hair stylist Jackson Marcelle says he has been using special injections to bleach his skin for the past 10 years. Each injection lasts for six months.
“I pray every day and I ask God, ‘God why did you make me black?’ I don’t like being black. I don’t like black skin,” he tells me. 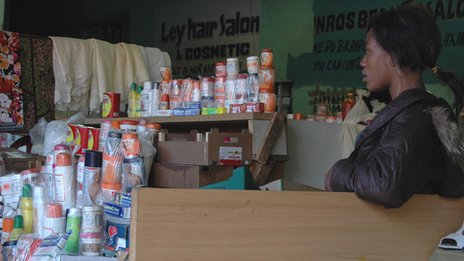 Skin lightening creams are popular in many parts of Africa

Mr Marcelle – known in this busy community as Africa’s Michael Jackson – says his mother used to apply creams on him when he was young in order to make him appear “less black”.
“I like white people. Black people are seen as dangerous; that’s why I don’t like being black. People treat me better now because I look like I’m white,” he adds.
Entrenched in the minds of many Africans from a young age is the adage “if it’s white, it’s all right”, a belief that has chipped away at the self-esteem of millions.
Until this changes, no amount of official bans or public information campaigns will stop people risking serious damage to their health in the pursuit of what they think is beauty.

An ad campaign for a skin-whitening cream that promises results in 15 days has ignited fierce debates on Senegalese social networks since September.
“Khess Petch” – loosely translated from the local Wolof as “All White” or “All Light”- printed on huge placards all around town portray a woman “before” and “after” she’d used the cream – she is seen black and then fair white.
Nearly 2,000 people signed an online petition to bring the adverts down, and soon after, a counter-campaign “Nuul Kuuk” was set up defending Black skin pride.
Doctors at the main dermatology hospital service in Dakar say they receive an average of 200 women per week in cases related to the use of skin-whitening products.
Reports have been broadcast on television about the risks of using whitening creams following the huge controversy.
Many women with bad skin damage have sought to encourage others to stop using these products.
“I bitterly regret having done that to myself,” a 51-year-old woman told me. “But girls and women with fairer skin would always seduce more men,” she said.
She wears a scarf to hide a long stain and spots that the products left on her skin. “It is ugly and it itches,” she says.
The health minister eventually met with Nuul Kuuk activists who were told that current laws couldn’t forbid ads campaign for these products, which are labelled as cosmetics.
The ads for Khess Petch are now down, but other creams have just started their own campaign.