By STEVEN ERLANGER
Published: January 20, 2013
PARIS — With French officials saying confidently on Saturday that an advance by Islamist militants on Bamako, Mali’s capital, had been halted, France’s foreign minister told African leaders that “our African friends need to take the lead” in a multilateral military intervention in Mali.
The foreign minister, Laurent Fabius, spoke in Abidjan, Ivory Coast, at a summit meeting to discuss how to accelerate the involvement of West African troops in Mali, although he acknowledged that it could be weeks before they were there in force.
“Step by step, I think it’s a question from what I heard this morning of some days, some weeks,” said Mr. Fabius, referring to the time frame when the bulk of troops from the Economic Community of West African States, the regional group known as Ecowas, would arrive. 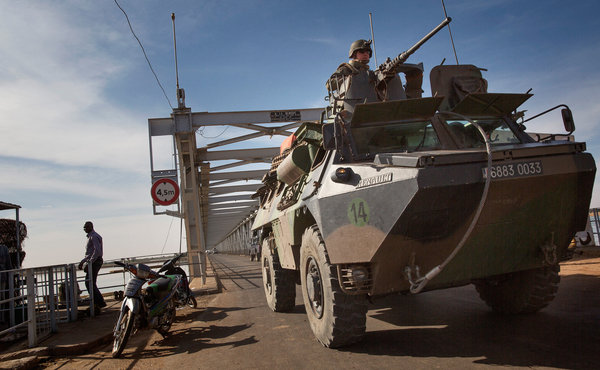 A French armored vehicle patrolled a strategic bridge over the Niger River in Markala, Mali, on Saturday.

On Sunday, Mr. Fabius told Europe 1 radio that Russia, which has previously remained on the sidelines of the conflict, had suggested helping France transport soldiers and equipment to Mali. He did not say whether France had accepted the offer.
He also said African forces would be transported in part with European and Canadian logistical support.
France intervened militarily on Jan. 11 after the Malian government said it was afraid that Islamist militants, who control the north, could continue their push south and take over Bamako with little opposition from a dispirited army.
Once the situation is more stable, France wants African troops to do most of the work to wrest the north from the Islamists, as called for under a United Nations Security Council resolution passed in December.
French officials conceded, however, that there were disputes over how African participation would be financed and about the best way to transport troops to Mali. In Paris, French officials said the United States, while willing to help ferry African troops, wanted to bill France for the use of transport aircraft, which officials said would not go down well with the French. The Pentagon favors providing rapid help with transport and even with air-to-air refueling, but the White House is more reluctant, the officials said.
But the officials said France and that the United States were sharing intelligence about Mali and the Sahel region of North Africa that was garnered from drones and other means, and that discussions with Washington continued amicably.
The African troops also need equipment and training, and Mr. Fabius pointed to a donors’ meeting in Ethiopia scheduled for Jan. 29 as “a key moment.”
The French defense minister, Jean-Yves Le Drian, said Saturday that France now had 2,000 troops in Mali, with more in the region, and that France was likely to add to its forces there. He said that the Mali operation could involve at least 4,000 soldiers in the region, and French officials said they would put no fixed limit on the number of troops that might be required to restore the territorial integrity of Mali and drive back the Islamist fighters, who have ties to Al Qaeda.
The French officials emphasized that the targets of the mission were the Islamists, not the Tuaregs or other Malians fighting for more autonomy or independence in the north. They also said Islamist terrorists in Mali had made four or five efforts to carry out operations in France in the last few years.
Despite reports of French forces fighting on the ground in and around the village of Diabaly, Mr. Le Drian said that “there has been no ground combat” there, only airstrikes. He dismissed reports from Malian Army sources that French troops were fighting or even in the town. “I think someone is hallucinating,” he said. Residents have told local news agencies that the Islamists have left Diabaly, which they seized as an important way station on the road to the administrative capital, Ségou, north of Bamako.
The Associated Press reported on Sunday that it had obtained video filmed by a resident of Diabaly showing a street dotted with burned-out vehicles and scattered bullets. The town remained calm on Sunday, The A.P. said. The video showed residents inspecting vehicles and charred weaponry destroyed by French airstrikes.
In the Islamist-controlled northern town of Gao on Saturday, young residents lynched an Islamist police commissioner in retaliation for the killing of a local radio journalist earlier in the day, according to a Twitter post from the office of Mali’s president, Dioncounda Traoré. The journalist had been suspected of working with foreign radio stations, Reuters reported.
French airstrikes have halted the Islamist advance toward Mopti and nearby Sévaré, French officials said, while they confirmed that the village of Konna, north of Mopti, was now back in the hands of Mali’s government.
Also on Saturday, Human Rights Watch said it had received what it called credible reports of abuses being committed by Malian security forces against Tuareg and Arab civilians.
Alan Cowell contributed reporting from London.