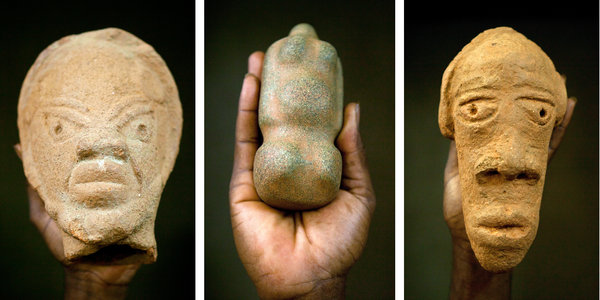 These three objects were offered for sale by an antiquities dealer in Mopti, Mali.

DJENNE-DJENNO, one of the best-known archaeological sites in sub-Saharan Africa, spreads over several acres of rutted fields near the present city of Djenne in central Mali. The ruts are partly caused by erosion, but they’re also scars from decades of digging, by archaeologists in search of history and looters looking for art to sell.

When I was there last fall, a few archaeology students were in evidence. These days, with Mali in the throes of political chaos, it’s unlikely that anyone is doing much work at all at the site, though history and art are visible everywhere. Ancient pottery shards litter the ground. Here and there the mouths of large clay urns, of a kind once used for food storage or human burial, emerge from the earth’s surface, the vessels themselves still submerged.

The image of an abandoned battlefield comes to mind, but that’s only half-accurate. Physical assaults on Djenne-Djenno may be, at least temporarily, in abeyance. But ethical battles surrounding the ownership of, and right to control and dispose of, art from the past rage on in Africa, as in other parts of the world.

A few weeks ago the Museum of Fine Arts, Boston, announced the acquisition of an American private collection of 32 exquisite bronze and ivory sculptures produced in what is now Nigeria between the 13th and 16th centuries. Within days the Nigerian National Commission for Museums and Monuments claimed, via an Internet statement, that the objects had been pillaged by the British military in the late 19th century and should be given back.

More chilling were reports last month of cultural property being destroyed in Timbuktu, Mali, some 200 miles north of Djenne. Islamist groups, affiliated with Al Qaeda, have singled out Sufism, a moderate, mystical form of Islam widespread in Mali, for attack. In Timbuktu, with its Koranic schools and manuscript libraries, they have begun leveling the tombs of Sufi saints, objects of popular devotion.

In short, the wars over art as cultural property take many forms: material, political and ideological. On the surface the dynamics may seem clear cut, the good guys and bad guys easy to identify. In reality the conflicts are multifaceted, questions of innocence and guilt often — though not always — hard to nail down. In many accounts Africa is presented as the acted-upon party to the drama, the loser in the heritage fight, though such is not necessarily the case, and it certainly doesn’t have to be, and won’t be if we acknowledge Africa as the determining voice in every conversation.

At least some of the complications surrounding the story of art found and lost has played out at Djenne-Djenno over the past 35 years. In 1977 the American archaeologists Roderick and Susan McIntosh, husband and wife at the time, began excavating the site and gradually revealed the traces of a sizable settlement. Its origins dated to the third century B.C., but by A.D. 450 it had produced a complex urban society, one that engaged in long-distance trade. The long-held assumption was that both developments came to Africa with the Arab arrival in the seventh and eighth centuries A.D. With new knowledge the continent’s past suddenly deepened. 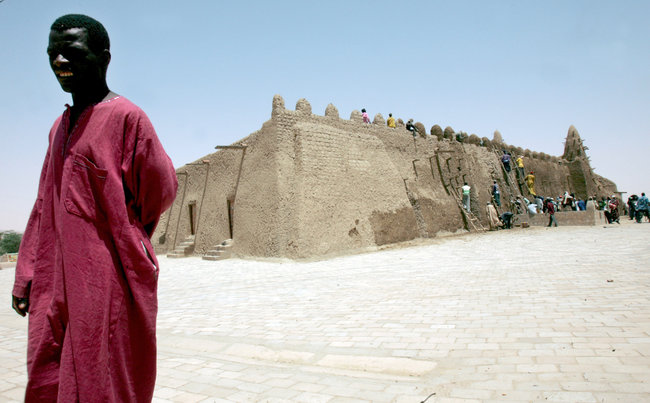 The Djinguereber mosque of Timbuktu.

And the history of its art was expanded. In the upper strata of the excavation at Djenne-Djenno and at the many related neighboring sites in the Inner Niger Delta archaeologists found terra-cotta sculptures of human and animal figures: men riding horses or entwined by serpents, figures sitting or kneeling, their bodies covered with what looked like blisters or welts.

The revelation was finding the sculptures in situ, in their historical context, though the figures themselves were of a familiar type. Numbers of similar terra-cotta sculptures had already been showing up for sale, as tourist souvenirs in Africa and as fine-art collectibles in the West. 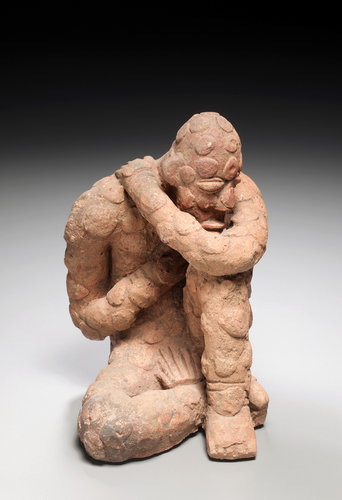 By the late 1960s the supply of wood sculptures that had defined the field for most collectors was growing thin. Malian terra-cottas became the new available “classical“ African art to collect.

To meet the demand Malian diggers, or teams of diggers, in the hire of middleman dealers, were trenching sites in the Djenne-Djenno area and pulling figures out of the ground, in the process destroying the historical record. The workers were paid a pittance for their labor, but in the 1970s Mali was gripped by famine; any money was better than none. The objects were subsequently sent out of Africa, to Western dealers and collectors, increasing in cash value as they went. 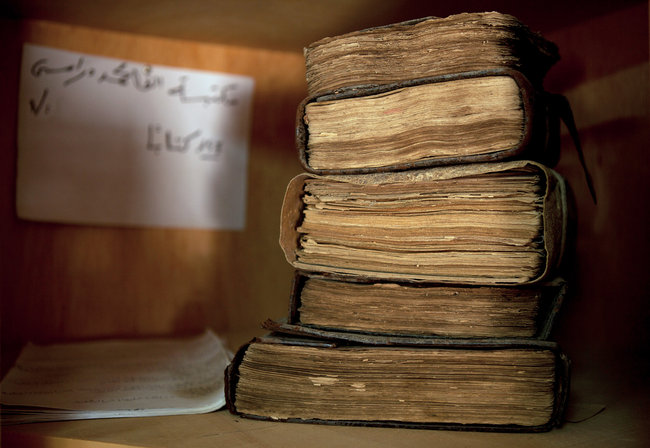 Books at the Djenne Manuscript Library.

Technically, unauthorized trade in such art had been illegal since 1970, when Unesco drew up its Convention on the Means of Prohibiting and Preventing the Illicit Import, Export and Transfer of Ownership of Cultural Property. But the digging went on, and getting art out of the country — through porous borders, with a payment of bribes — was (and still is) easy.

Certain archaeologists, the McIntoshes among them, were aghast at the ruinous plundering and took action. They were convinced that any Western attention paid to Malian antiquities increased the market value and encouraged looting. With this in mind they proposed an information blackout on any and all “orphaned“ Inland Niger Delta objects, meaning any that had not been scientifically excavated — most of those in circulation. 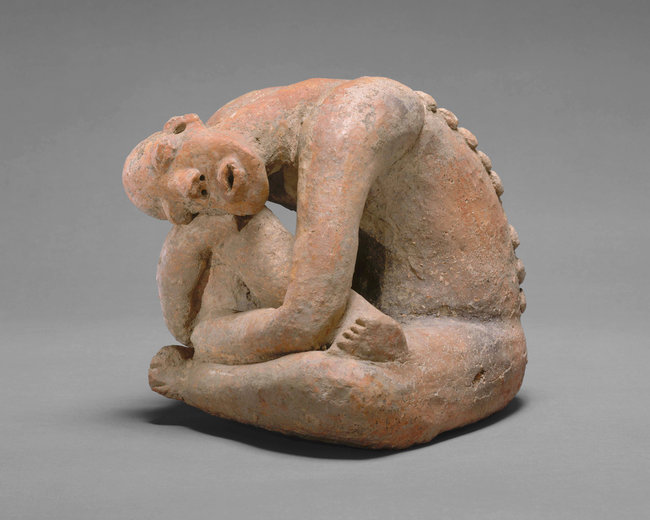 A figure from the 13th century.

They urged dealers abroad not to sell such objects, collectors not to buy them, museums not to exhibit them, art historians not to publish images of them or write about them, certainly not in seductively aesthetic terms. The main objective was to protect objects that were still in the ground by drawing attention away from this art. Noncompliance with their strictures was punished by public shaming, with its implied threat of professional ostracism.

A hard line had been drawn. On the other side of it stood the dealers, collectors and museum personnel, whose livelihood and identity depended on a continuous flow of art, wherever it came from. Also on that side, though ambivalently aligned with it, were art historians, who didn’t need to own objects but did require some contact with them in order to learn how they were made and to learn how to distinguish genuine ones from fakes. (A large percentage of Djenne-Djenno pieces on the market were, and are, fakes.)

Unsurprisingly, given the negative charge surrounding all but a limited number of sculptures, art historians began to turn their attention to theory-based critical studies. Today, decades later, the standoff among the various factions still, to some extent, holds. Archaeologists have gained a reputation as fanatical heroes, ethics geeks. And, it turns out, their anti-market position has been backed up with laws, a series of national and international treaties that limit the market and monitor art’s movements.

The United States, for example, banned the import of unauthorized Malian antiquities. The government of Nigeria vigilantly tracks and attempts to reclaim what is considered of pilfered heritage. This includes Benin material and also ancient terra cottas that go by the name of Nok. Found in northern Nigeria, these sculptures date as far back as 800 B.C. They appeared in great numbers on the black market in the 1990s. Little work has yet been done on them.

The antiquities wars were not easy on dealers, collectors and museum administrators. Not only were their jobs threatened and acquisitive passions blocked, but they acquired unfortunate reputations. Once esteemed as cultural benefactors, they came to be seen, in some quarters, as hoarders and thieves.

Where does Africa itself stand in all of this? Is it merely the battleground on which science and commerce clash, a passive stretch of turf to be either righteously conserved or carved up and parceled out? Or is it — could it be — an active, gainful partner in cultural exchange?

It could. Art-alert countries like Nigeria and Mali have stockpiles of objects in storage. Selections of them could be leased out to Western institutions, or even swapped for temporary loans of Western art. The idea that Africa would not be receptive to such exchanges is wrong. It has fine museums (in Bamako, in Lagos), impressive private collections (one is documented in Sylvester Okwunodu Ogbechie’s superb book “Making History: African Collectors and the Canon of African Art“), and at least a few sharp critics (check out Kwame Opoku at modernghana.com).

There’s no reason to think that concepts of art in Africa and the West — I use these generalities for convenience only — have to jibe. But clearly a sense of the complex value of patrimony is strong and can be pushed further. The time is long past due to be compiling comprehensive digital databases not just of art from Africa, but also of art that’s still there. Not only would this be an invaluable, promotional resource for international study, it would also be a lasting record of types of ephemeral art, or of things too fragile to move, or of objects that have, in the event of political instability, a good chance of being lost.

There are many such imperiled objects today in northern Mali, and especially in Timbuktu. In July several tombs of Sufi saints were pickaxed and pounded to rubble by Al Qaeda-linked Islamist groups. These packed-earth structures were distinguished far more by their sanctity than by their beauty and, the hope is, can be rebuilt.

Irreplaceable, however, are the many thousands of manuscripts, including handwritten documents in Arabic and African languages dating back to the 10th century, that are housed in Timbuktu’s libraries. Together with manuscripts still in private hands in the city, they constitute one of the continent’s great historical treasures.

The fear is that if the Islamists decide that the libraries are in some way religiously offensive, they will harm them irrevocably, possibly setting aside Koranic manuscripts and burning the rest. And there is an added fear that if the West should make a public cause of the libraries and their contents, that would only prove an incentive to their destruction.

Can that be the reason that outcry from the West on behalf of the libraries has thus far been subdued? I doubt that. Compared to the attention given to cultural crises in Europe or Asia, whatever happens in Africa gets scant press. An elbow stuck through a Picasso is a big deal; the possible destruction of books we’ve never seen, written in languages we don’t know, with words from a religion many don’t trust, isn’t.

After my autumn visit to Djenne-Djenno I went on to the city of Mopti, about 50 miles to the north, where a local dealer in beads and antiquities showed me his choicest wares. There were three sculptures, each small enough to fit in the palm of my hand. Two were terra-cotta heads. One had a melancholy look, the other was fierce, scowling, a combatant. Genuine Nok, the dealer assured me, though naturally I had my doubts. And anyway I couldn’t even think of buying: Nok is contraband.

The third piece was stone, and a mystery. It looked rubbed into shape rather than carved, like a melting, featureless Willendorf Venus. Its flawless smooth surface felt calming to the hand. I couldn’t place it, relate it to any art I recognized, African or otherwise. Did he know where it came from? No. Or who might have made it? No. Its age? Don’t know. Price? Not for sale. Just beautiful. Yes.