St. Marks Down a Fro-Yo Joint, But Gets African Espresso 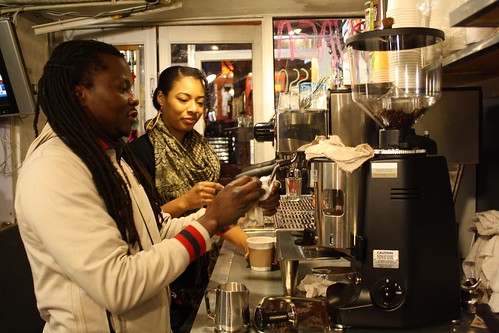 The good news: Waga, the African gift shop at 22 St. Marks Place, has jumped into the coffee game. Ouenisongda Sawadogo, the store’s owner, said he had wanted to serve African coffee for some time. With the economy still in the doldrums, his rent on the rise, and the tough months of January and February ahead of him, he decided now was the time to open up a sidewalk to-go window.

“We sell mostly artifacts, but people right now are hurting. They don’t want to spend for this kind of luxury,” he said, nodding at his subterranean sliver of a store stocked with west African masks, bags, clothing, and jewelry. “I had to come up with an idea to add a little bit of cash.”

The idea: an array of espresso drinks made from organic, fair-trade Arabica beans roasted by Brooklyn Roasting Company. The beans, Mr. Sawadogo said, are harvested by a female farming cooperative in countries like Kenya and Tanzania. 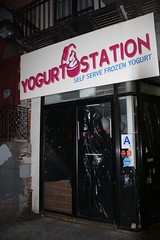 Mr. Sawagodo, who grew up in Burkina Faso, worked at a souvenir shop on St. Marks Place after he moved to New York in 1997; two years later he began selling African gifts on the sidewalk, and in 2002 he opened Waga across the street from his outdoor table.

“The block has lost a lot of its flavor,” he said. To add some back, he’ll sell an array of teas as well as African juices such as sorrel, ginger, and baobab.

While a $1,200 crocodile-skin handbag (complete with crocodile head) gathers dust on a top shelf, he hopes the drinks will help his bottom line. “The rent isn’t going down, it’s going up,” he said.