By LYDIA POLGREEN
Published: December 18, 2012
BLOEMFONTEIN, South Africa — In South Africa, a nation where the gap between the rich and poor yawns wider than just about anywhere in the world, Cyril Ramaphosa might seem an unlikely savior to a political party whose base is the poor. His fortune is estimated to top $500 million. He sits on the board of the mining company whose 34 workers were killed in a harsh police crackdown on an illegal strike protesting low pay and miserable living conditions.
Yet when all the votes were counted at the African National Congress’s leadership conference here on Tuesday, Mr. Ramaphosa, a union leader turned business tycoon, had won more than 75 percent of the vote to become deputy president of the party, making him heir apparent to the top job and South Africa’s presidency once the nation’s leader, Jacob Zuma, ultimately leaves office.
Mr. Zuma, who is embattled but popular among the party faithful who attended the conference, easily won a second term as president of the party, beating back a challenge from his deputy, Kgalema Motlanthe.
The vote caps a tumultuous year for the A.N.C. It began with celebrations of the centenary of the party’s founding but quickly descended into party infighting and economic chaos after a series of violent wildcat strikes met the harsh police crackdown that killed the 34 miners. Revelations of corrupt deals and state-sponsored renovations on Mr. Zuma’s house in his home village tarnished his image as the son of a poor family who rose to the highest office in the land.
While the party met, the man who in many ways remains its symbolic and moral center, Nelson Mandela, who led the country out of apartheid and into multiracial democracy, remained in the hospital, 94 and in frail health.
And as if to underscore the uncertainty the nation faces, four men associated with a right-wing Afrikaner group seeking a separate state for whites were charged with treason in court here in Bloemfontein on Tuesday, accused of plotting to bomb the leadership conference and assassinate Mr. Zuma in a plot they code-named “The Slaughter of Mangaung,” a reference to the municipal region where the conference was held. 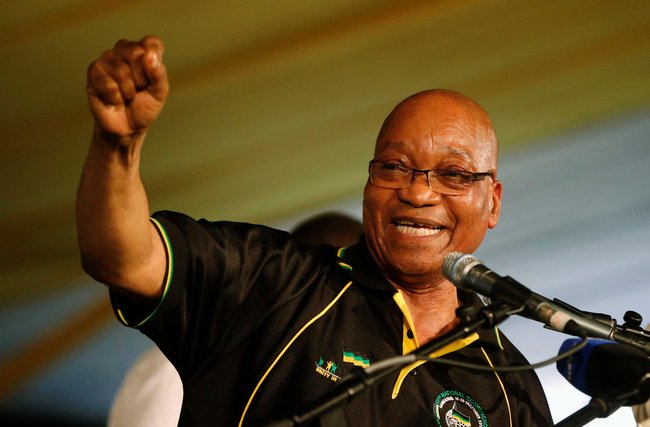 As was widely expected, the 4,000 delegates here opted to return Mr. Zuma as the party president, making him almost certain to win the presidential election to be held in 2014.
His victory was greeted by wild cheering in the vast tent erected on the campus of a university to hold the delegates. Beneath yellow, black and green bunting, the colors of the A.N.C., they sang “Zuma is the one,” and stomped their feet, waving two fingers in the air, a symbol of support for Mr. Zuma’s second term.
Less expected until recent weeks was the re-emergence of Mr. Ramaphosa on the political stage. As a young lawyer in the 1980s, Mr. Ramaphosa founded the National Union of Mineworkers and led the country’s biggest mine strike in 1987. He played a crucial role in negotiating the transition from white rule to democracy after Mr. Mandela was released from prison in 1990. He also helped draft the country’s Constitution.
He was widely touted as Mr. Mandela’s most likely successor but was passed over in favor of Thabo Mbeki, and went into business instead. His investment company, Shanduka, has made him enormous wealth, with investments ranging from mining to fast food to mobile telecommunications.
Mr. Ramaphosa is in many respects the embodiment of the contradictions and divisions that have rived the A.N.C. in the decades since apartheid ended. He fought alongside other stalwarts of the struggle who remained in South Africa while the A.N.C. and other opposition parties were banned, spending 11 months in solitary confinement as a young man for his agitation against the state. He sacrificed what could have been a lucrative career working for white-owned companies for poorly paid union work.
But his wealth and power since the end of apartheid have also made him an emblem of a party that has gone from resisting a brutally oppressive government to being the dominant party in government and, increasingly, in business. Investment deals made under policies designed to encourage black ownership in the economy have made Mr. Ramaphosa a very prominent member of the new black elite that is viewed with envy and suspicion by millions of poor blacks left far behind.
Recent events have sharpened this perception. Mr. Ramaphosa serves on the board of directors of Lonmin, the platinum mining company whose workers were killed by the police during a wildcat strike in August. He was also widely criticized for bidding more than $2 million to buy a prize buffalo for breeding, though his supporters argue it was an investment, not a vanity purchase, and in any case another farmer outbid him.
“It hasn’t been a particularly good year for him,” said Trevor Manuel, a top A.N.C. leader who has worked closely with Mr. Ramaphosa for years, most recently on South Africa’s Planning Commission, where Mr. Ramaphosa was his deputy.
Some here question whether his vast wealth and long absence from retail politics have put him out of touch with the rank and file of the A.N.C.
“In a party that is grappling above all with inequality, how does it look to have a deputy president who is a billionaire?” asked Adam Habib, a political analyst who has just been named vice chancellor of the University of the Witwatersrand.
Mr. Ramaphosa has bridged the world of white capital and black working people for most of his career. He is a lawyer by training and never actually worked as a miner.
Before he became a union organizer, he worked at the Urban Foundation, an organization started by Harry Oppenheimer, then the head of Anglo American, a vast conglomerate with a dominant position in South Africa’s apartheid economy.

As a young lawyer, Mr. Ramaphosa had a fondness for fine things, buying a BMW when he could scarcely afford it, according to a biography of him by the scholar Anthony Butler. His work as a lawyer and foundation official allowed him to move easily among the mine bosses with whom he hammered out deals. He dressed, spoke and behaved much as they did, according to those who have known him for years.
“He’s tremendously suave and he knows how to say the right things,” said Steven Friedman of the Center for the Study of Democracy. Business leaders would certainly welcome his election as deputy president, seeing him as a familiar face from many corporate boardrooms on whom they could depend to be reliably pro-capitalism, Mr. Friedman said.
But it would be a mistake to assume that Mr. Ramaphosa has forgotten his roots in union work just because he is now a rich man, said Aubrey Matshiqi, a political analyst and columnist.
“We need to distinguish between class position and class consciousness,” Mr. Matshiqi said.
Mr. Manuel said Mr. Ramaphosa was used to wearing many hats.
“Cyril’s remarkable ability is in the number of balls he can keep juggled in the air,” Mr. Manuel said. “He does this stuff with a lot of devotion.”
Another thorny question is how to untangle Mr. Ramaphosa from the business he has built. His investment company, Shanduka, has holdings in a broad variety of investments, and Mr. Ramaphosa has been an active investor, working closely with the companies in which he has put money, business associates say.
“His business interests are so intertwined with government,” said one business associate who has worked with Mr. Ramaphosa on a number of projects but declined to be identified given his impending political rise. “It will be very hard for him to walk the line.”
But others suggested that his fortune would be a guarantee against corruption, a growing menace for the A.N.C.
“If you get somebody who does not have his own resources, you are putting the country to the highest bidder,” said Frans Baleni, general secretary of the National Union of Mineworkers, who has known Mr. Ramaphosa for decades. “I don’t think that having resources, especially if people have their own resources which are acquired through normal business and not corruption, is a wrong thing.”