Watch the presentation below:

Ron Eglash (born December 25, 1958 in Chestertown, MD) is an American cyberneticist, university professor, and author widely known for his work in the field of ethnomathematics, which aims to study the diverse relationships between math and culture. His research includes the use of fractal patterns in African architecture, art, and religion, and the relationships between indigenous cultures and modern technology, such as that between Native American cultural and spiritual practices and cybernetics. He holds a Bachelor’s degree in Cybernetics, a Master’s in Systems Engineering, and a Ph.D. in History of Consciousness, all from the University of California. A Fulbright fellowship enabled his postdoctoral field research on African ethnomathematics, which was later published in the book African Fractals: Modern Computing and Indigenous Design. 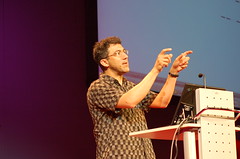 Dr. Eglash has also conducted studies in teaching children math and computing through simulations of indigenous and vernacular cultural practices. He explains that the simulations do not impose math externally, but rather translate the mathematical ideas already present in the cultural practices to their equivalent form in school-taught math. Examples include transformational geometry in cornrow braiding, spiral arcs in graffiti, least common multiples in percussion rhythms, and analytic geometry in Native American beadwork. His approach is one of many attempts to draw the inspiration to learn out of students’ own cultural backgrounds.
He also studies social justice issues as they manifest in the practice of science and technology, ranging from the ethnic identity of “nerds” to the so-called appropriation of science and technology by groups disempowered on the bases of race, class, gender. Another branch of this research explores how the “bottom-up” egalitarian principles found in many indigenous cultures could be applied to modern society in fields from economics to political science.
He has served as a senior lecturer in comparative studies at Ohio State University, and currently works as an Associate Professor in the Department of Science and Technology Studies at Rensselaer Polytechnic Institute, where he has taught courses on Science and Social Theory, the History of Information Technology, and a design studio for the Product Design and Innovation program.