EARLY STAGES
Banjos belong to a family of instruments that are very old. Drums with strings stretched over them can be traced throughout the Far East, the Middle East and Africa almost from the beginning. They can be played like the banjo, bowed or plucked like a harp depending on their development. These instruments were spread, in “modern” times, to Europe through the Arab conquest of Spain, and the Ottoman conquest of the Balkans. The banjo, as we can begin to recognize it, was made by African slaves based on instruments that were indigenous to their parts of Africa. These early “banjos” were spread to the colonies of those countries engaged in the slave trade. Scholars have found that many of these instruments have names that are related to the modern word “banjo”, such as “banjar”, “banjil”, “banza”, “bangoe”, “bangie”, “banshaw”. Some historians mention the diaries of Richard Jobson as the first record of the instrument.. While exploring the Gambra River in Africa in 1620 he recorded an instrument “…made of a great gourd and a neck, thereunto was fastened strings.” The first mention of the name for these instruments in the Western Hemisphere is from Martinique in a document dated 1678. It mentions slave gatherings where an instrument called the “banza” is used. Further mentions are fairly frequent and documented. One such is quoted in Grove’s Dictionary of Music and Musicians from a poem by an Englishman in the British West Indies in 1763: “Permit thy slaves to lead the choral dance/To the wild banshaw’s melancholy sound/”. The best known is probably that of Thomas Jefferson in 1781: “The instrument proper to them (i.e. the slaves) is the Banjar, which they brought hither from Africa.” 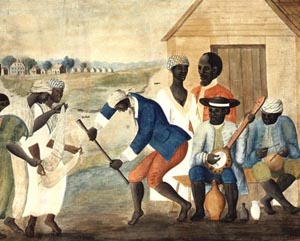 MINSTREL ERA
White men began using blackface as a comic gimmick before the American Revolution. The banjo became a prop for these entertainers, either individually or in groups. By the early part of the 19th century, minstrelsy became a very popular form of entertainment. Joel Walker Sweeney and his Sweeney Minstrels were already popular by the 1830s. By 1843 the Virginia Minstrels began to do an entire show of this blackface entertainment and this is usually the date used to mark the beginning of the minstrel era. The Virginia Minstrels had 2 Banjo players, Dan Emmett and Billy Whitlock, a pupil of Sweeney. In addition Minstrel shows usually had a fiddler, a bones player and a drum/tambourine. We know from early Banjo instruction books by performers like Thomas Briggs, 1855, Philip Rice, 1858 and Frank Converse, 1865, that the minstrel style of playing was the “downstroke”, what we call frailing today. This style was learned from the slave performers themselves.
Briggs in Banjo Instructor of 1855 describes playing as follows: “In playing the thumb and first finger only of the right hand are used; the 5th string is touched by the thumb only; this string is always played open, the other strings are touched by the thumb and first finger…The strings are touched by the ball of the thumb and the nail of the 1st finger. The first finger should strike the strings with the back of the nail and then slide to…..”
Frank Converse in his Banjo Without a Master describes the style of playing as follows: “Partly close the hand, allowing the first finger to project a little in advance of the others. Hold the fingers firm in this position. Slightly curve the thumb. Strike the strings with the first finger (nail) and pull with the thumb.”
THE FIFTH STRING
Joel Walker Sweeney of The Sweeney Minstrels, born 1810, was often credited with the invention of the short fifth string. Scholars know that this is not the case. A painting entitled The Old Plantation painted between 1777 and 1800 shows a black gourd banjo player with a banjo having the fifth string peg half-way up the neck. If Sweeney did add a fifth string to the banjo it was probably the lowest string, or fourth string by today’s reckoning. This would parallel the development of the banjo elsewhere for example in England, where the tendency was to add more of the long strings with seven and ten strings being common. Sweeney was responsible for the spread of the banjo and probably contracted with a drum maker in Baltimore, William Boucher, to start producing banjos for public sales. These banjos are basically drums with necks attached. A number have survived and a couple of them are in the collections of the Smithsonian Institute in Washington. Other makers like Jacobs of New York or Morrell who moved his shop to San Francisco during the Gold Rush, helped to supply the growing demand for the instrument in the mid 1840s as the minstrel shows traveled Westward to entertain the gold diggers.
http://bluegrassbanjo.org/banhist.html