By JED LIPINSKI
Published: January 12, 2013
Precious Perry shares a few things in common with the fictional protagonist in the 2009 film “Precious.”
Both young women grew up in Harlem with troubled single mothers. Both left home in their teens. And both had their lives changed by social workers who showed them that another life was possible.
This is not to say that Ms. Perry, 23, liked the film.
“Ugh, I hate that movie,” she said the other day, sitting in a coffee shop on the Upper West Side. “When it came out, nobody believed my name was Precious. A friend once introduced me as Precious, and the other person got angry, like: ‘Why would you call her that?’ ”
Nevertheless, parts of the movie resonated with her.
“I was laughing and crying pretty much the whole time,” she said. “It was just so sad.”
Ms. Perry has experienced her share of hardship. She has never known her father, and her mother struggled with drug addiction for years, Ms. Perry said. As a result, Ms. Perry and her infant sister were formally placed in kinship foster care with their aunt.
The following year, Ms. Perry’s mother gave birth to another girl and was found unfit to care for her, as well, Ms. Perry said. In the years since, Ms. Perry has become a kind of surrogate mother to her sisters. 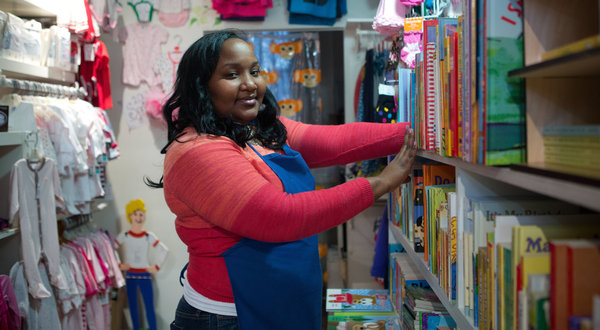 Precious Perry, 23, at her part-time job at a nonprofit toy store on the Upper West Side. She expects to graduate with a bachelor’s degree in May, and has become a kind of surrogate mother to her siblings.

Despite all this, Ms. Perry has remained a disciplined student and an avid reader. She graduated from Frederick Douglass Academy in Harlem, where she discovered the work of Walter Dean Myers, the acclaimed novelist of young adult books that often feature black urban teenagers trapped in violent gangs or juvenile detention centers.
“It helped to read about people going through more difficult experiences than me,” she said.
After high school, Ms. Perry enrolled at Tompkins Cortland Community College in Ithaca, N.Y. Two years later, she transferred to SUNY College at Old Westbury, on Long Island, to be closer to her sisters.
Ms. Perry credits the social workers at the Children’s Aid Society, one of the organizations supported by The New York Times Neediest Cases Fund, for providing her with career role models. Since she entered foster care at 16, they have helped her with health coverage, housing and employment prospects, as well as emotional support.
Ms. Perry, in turn, has adhered to a demanding schedule. During the fall semester, she held two part-time jobs, one as a front desk clerk at her campus library, another as a sales associate at a nonprofit toy store on the Upper West Side called A Time for Children, where she continues to work.
She commuted to school on the Long Island Rail Road four nights a week, using the 45-minute ride to study.
On weekends, she spends time with her little sisters — taking them ice-skating or to the Central Park Zoo.
“We’ll go see kids’ movies together, like ‘Ice Age,’ ” she said. “I took them to see ‘Twilight’ once, but I had to cover their eyes for a few scenes.”
Last June, Ms. Perry was accepted into the New York Foundling supportive housing program. A month later, she moved from her aunt’s apartment in Manhattan, where she had been spending holidays and summer breaks, into her own apartment in the Crown Heights, Brooklyn.
She and her aunt scraped together $645 for the move-in costs. Drawing on Neediest Cases funds, the Children’s Aid Society provided Ms. Perry with $300 for food, kitchen and cleaning supplies and bedding.
Today, she pays rent at 30 percent of her net income, and has guaranteed housing until she turns 26.
Ms. Perry, with a major in sociology and a minor in social work, expects to graduate in May. She is preparing to apply for a master’s program in social work at Hunter College, which would make her the first in her family to attend graduate school.
Several years ago, Ms. Perry’s mother entered a drug-treatment program, Ms. Perry said, and was judged fit to care for Ms. Perry’s youngest sister, who is now 5. Evidence of their improved relationship is visible on Ms. Perry’s wrists, which bear the tattooed words “Family” and “First.”
The names and birthdays of her sisters are inscribed on her calves in cursive script. “I got the older one’s tattoos right after she was born, and it was so painful,” she said, wincing at the memory. “So when the younger one was born, I thought, ‘Oh, no!’ ”
“But I knew I had to do it,” she added.
The tattoos remind her of the importance of being a role model for her siblings, she said.
“I bring them to school with me on the train sometimes,” she said.
“I want them to see what college is like, so that they think, ‘This is where I want to go, too.’ ”