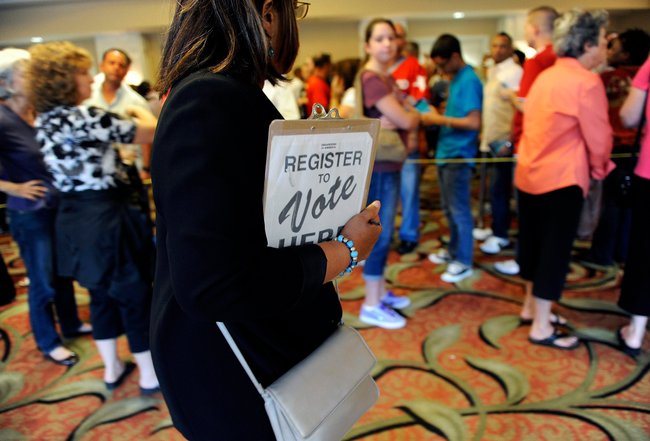 A volunteer tried to register voters waiting for former President Bill Clinton to appear Wednesday at an Obama campaign event in Orlando, Fla. The state said it would continue a review of voting rolls for noncitizens, despite charges that it focuses on immigrants.

MIAMI — In a partial victory for voter rights and immigrant groups, Florida residents who were mistakenly removed from the voter rolls this year because the state classified them as noncitizens will be returned to the rolls and allowed to vote in November.

The Florida Department of State, which initiated the review of noncitizens on the voter rolls, also agreed Wednesday to inform the 2,625 people on the list who are eligible to vote that their voting rights had been fully restored. Still unresolved is whether Florida broke a federal law preventing voter purges within 90 days of an election.

The agreement stems from a lawsuit brought by several groups that said the so-called voter purge was discriminatory because it singled out mostly immigrants. “There will be no purging before the election,” said Katherine Culliton-González, director of voter protection for the Advancement Project, one of the civil rights groups that sued the state. “American citizens won’t be purged, and naturalized citizens won’t be purged. For us, it’s a great victory.”

But the state said Wednesday that it would move forward with its program and would take a closer look at the voter rolls now that it had access to a federal database containing citizenship information. Florida received access to the Department of Homeland Security database, known as the Systematic Alien Verification for Entitlements program, or SAVE, in July after it sued the agency.

County election supervisors are now undergoing training on the database. Once that is completed, the state will send them more names from Florida’s driver’s license database to crosscheck with the federal system, said Ken Detzner, Florida’s secretary of state.

Mr. Detzner said that the state had so far confirmed that 207 noncitizens were on Florida voter rolls.

“The voter eligibility initiative is already proving to be a successful process to identify illegally registered voters on Florida’s voter rolls,” Mr. Detzner said in a statement. “We want every Florida voter to be confident that their vote is protected and not hurt in any way by the illegal activity of others.”

Florida’s initial attempt at culling noncitizens from voter rolls came under fierce attack after American citizens — the vast majority of whom were black or Hispanic — stepped forward to say that they had been asked to prove their citizenship or risk losing their right to vote.

In determining the initial list of 2,625 possible noncitizens, the state used an unreliable driver’s license databank. For this reason, most county election supervisors opted not to move forward with the noncitizen review process, making the actual number of people removed from the voting rolls unknown.