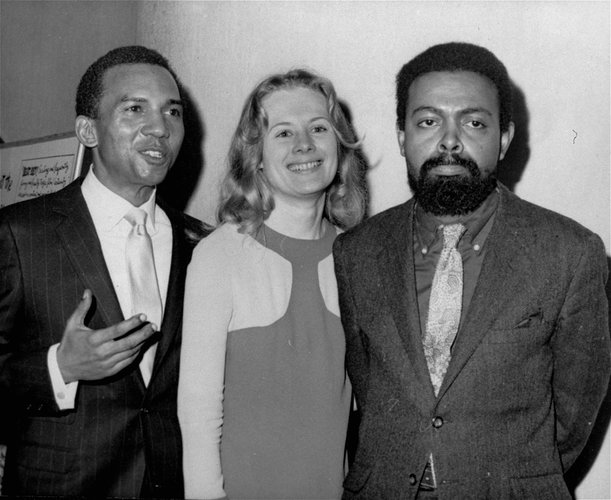 From left, Al Freeman Jr., Shirley Knight and Amiri Baraka, the activist writer, at the premiere of the film “Dutchman” in New York City in 1967.

Al Freeman Jr., a star among a generation of black actors that emerged during the civil rights era, who made his mark in both drama and race relations with his portraits of some of the movement’s most forbidding personalities — angry young men in the 1960s plays of James Baldwin and LeRoi Jones, Malcolm X in a television drama, and the black separatist Elijah Muhammad in Spike Lee’s 1992 movie “Malcolm X” — died on Thursday in Washington. He was 78.

His death was announced by Howard University, where he had been chairman of the theater arts department since 2005. No cause was disclosed.

Mr. Freeman’s lucid fury and psychological insight made him a favorite of literary black playwrights in the 1960s. He made his Broadway debut in 1960in “The Long Dream,” a stage adaptation of a novel by Richard Wright, playing a black undertaker’s son who discovers his father’s complicity in the racial oppression at the heart of small-town life.

He starred on Broadway again in 1962 with Cicely Tyson, Roscoe Lee Browne and Alvin Ailey in “Tiger Tiger Burning Bright,” a pessimistic depiction of a black family’s life in New Orleans at the end of World War II. And he returned to Broadway in 1964 to play the ill-fated pastor’s son Richard Henry in Mr. Baldwin’s play “Blues for Mister Charlie,” loosely based on the story of Emmett Till, the 14-year-old black youth murdered in Mississippi in 1955 after supposedly flirting with a white woman.

The same year, at the St. Mark’s Playhouse in the East Village, Mr. Freeman played a poet-revolutionary leading a race war in a production of “The Slave,” by Mr. Jones, now known as Amiri Baraka, which concludes with the sound of gunshots and a simulated bombing, the stage left covered in rubble. “Al Freeman Jr. is brilliant,” the critic Howard Taubman wrote in The New York Times, praising his performance for its “taut intelligence.”

Mr. Freeman viewed his role as a black actor during that time as part of a larger, unfolding drama, he told interviewers. “I wasn’t down there on the front lines with Martin Luther King, or preparing myself with the Black Panthers,” he told Ebony magazine in 1993. But bringing life to characters in plays like “Blues for Mister Charlie” and “The Slave,” he added, “That was my activism.”

By the end of the 1960s Mr. Freeman was being cast in television dramas and feature films like “Finian’s Rainbow,” starring Fred Astaire, and “The Detective,” with Frank Sinatra, both released in 1968. He said he liked the mainstream success, but lost some of the sense of purpose he had felt in dramas about race.

“Everything I’ve done, I’ve always tried to find a good reason for doing it,” he told The Times in 1970, referring to television projects. “But lately I’ve begun to think that maybe it’s my own kind of cop-out rationale.”

In the 1970s Mr. Freeman began appearing on the ABC soap opera “One Life to Live” in the recurring role of a police captain. In 1979 he received a Daytime Emmy for that role — the first ever given to an African-American in a soap opera — as well as critical acclaim for his portrayal of Malcolm X in the mini-series “Roots: The Next Generations.”

Teaching at Howard University beginning in 1988, Mr. Freeman had withdrawn somewhat from acting when Mr. Lee, preparing to direct “’Malcolm X,” asked him in 1991 to audition for the role of Elijah Muhammad, the Nation of Islam leader who inspired Malcolm X and then disappointed him with his marital infidelities.

Mr. Freeman later told interviewers that he felt he could bring to the part a feel for the times and a sense of the promise people saw in the young Malcolm, a part that went to Denzel Washington. “Certainly Spike didn’t pay me that much,” he told Ebony. “The point was that it had to do with my life.”

Reviews seemed to confirm his initial instincts. The critic Gene Siskel said watching Mr. Freeman’s Elijah Muhammad on screen was like watching documentary footage of the man himself.

Albert Cornelius Freeman Jr. was born on March 21, 1934, in San Antonio. After his parents, Albert and Lottie, divorced, he recalled, he spent much of his childhood shuttling between San Antonio, where his mother stayed, and Columbus, Ohio, where his father, a jazz pianist, resettled. In 1960 he married Sevara Clemon, a dancer; the couple divorced in the mid-1980s. No immediate family members are known to survive.

Mr. Freeman said his life as an artist was inextricable from the spirit of the times in which he lived, and that Malcolm X had articulated that spirit more powerfully than anyone. In the 1993 Ebony interview, he recalled once seeing Malcolm X speak in Harlem. “I remember him saying, ‘If a dog attacks you, whether it’s a four-legged dog or a two-legged dog, you kill that dog,’ ” he said. “That’s what I wanted to hear. I wanted to hear ‘stand up!’ Not ‘go out and kill anybody,’ but ‘stand up and be a man.’ ”