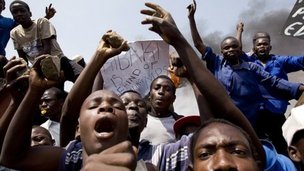 Two presidential candidates in Kenya are to stand trial over crimes against humanity following post-election violence in 2007, the International Criminal Court (ICC) has ruled.

They are among four prominent Kenyans – all of whom deny the accusations – who will stand trial.

Kenya’s president has appealed for people to stay calm after the news.

“Our great nation has had its share of challenging times,” Mwai Kibaki said in a statement.

Mr Kenyatta – son of Kenya’s founding President Jomo Kenyatta and a man who has been ranked as one of its richest citizens – is to stand trial with cabinet secretary Francis Mutaura.

The pair, both allies of President Kibaki, are accused of crimes against humanity, including murder and persecution.

Mr Kenyatta wrote on his Facebook page: “My conscience is clear, has been clear and will always remain clear that I am innocent of all the accusations that have been levelled against me.”

Former Education Minister William Ruto and radio presenter Joshua arap Sang will stand trial in a separate case, as they opposed Mr Kibaki during the 2007 election. Charges against a further two officials were not confirmed by the Hague court.

The violence began as clashes between supporters of the two rival presidential candidates – Raila Odinga and Mr Kibaki – but it snowballed into a bloody round of score-settling and communal violence.

“It is our utmost desire that the decisions issued by this chamber today bring peace to the people of the Republic of Kenya and prevent any sort of hostilities,” ICC presiding judge Ekaterina Trendafilova said.

Kenyans are due to head to the polls in fresh elections early next year.

Ms Trendafilova stressed that the decisions do not mean guilty verdicts against the suspects, only that there is sufficient evidence to send them to trial.

“We are not passing judgment on the guilt or innocence of the individuals,” she said before a public hearing held in The Hague.

No date has been set for the trials.

The news of the trials was welcomed by international campaign group Human Rights Watch.

“The ICC trials will break with decades of impunity in Kenya for political violence,” the group said in a statement.

“But Kenya should act to widen accountability by carrying out prosecutions at home.”

I am firmly still in the presidential race, the charges confirmed against me will not affect it”

In Kenya itself, there was a mixed reaction to the announcement, according to the BBC’s Muliro Telewa, in the Rift Valley town of Burnt Forest, the scene of one of the worst atrocities during the violence.

He said people in the town – where dozens died when a church where people had fled was set on fire – had gathered around radios in public places to listen to the ICC announcement.

Some, he said, saw the process at The Hague as political, while others were glad that justice was being done.

Mr Kenyatta is accused of organising a campaign of violence including murder and rape members of ethnic groups seen as supporters of Mr Odinga.

Prosecutors say he met members of a secretive criminal organisation known as the Mungiki at a shopping centre in Nairobi before the election in 2007 to plan some of the attacks.

He denied the accusation at a preliminary hearing at the ICC last September.

Mr Kenyatta is hoping to stand in next year’s presidential poll, with analysts suggesting that he has a realistic chance of winning.

Mr Ruto, a former education minister, described the charges against him as “strange” and emphasised that he still intended to put himself forward for the presidency.

“I am firmly still in the presidential race; the charges confirmed against me will not affect it,” Mr Ruto said from Nairobi.

He and Mr Sang backed Mr Odinga in 2007 and are accused of organising attacks on members of ethnic groups seen as Kibaki supporters.

Mr Sang said the news of the trial had come as a “big disappointment” but said he would contest the charges.

Kenya’s government has been lobbying for the cases to be dropped – a position endorsed last year by the African Union.

Mr Kibaki was eventually declared the winner of the 2007 election, and is serving his second and final term as president.

Mr Odinga was installed as prime minister under a power-sharing deal brokered by Kofi Annan to end the violence.

Mr Ruto and Mr Odinga have since fallen out and are expected to face each in the elections.