Skip to content
African American History
November 14, 2012 Ro Ho 0 Comments
MOUNTAIN CREEK, Ala. (AP) — The last of the more than 60,000 Confederate veterans who came home to Alabama after the Civil War died generations ago, yet residents are still paying a tax that supported the neediest among them.
Despite fire-and-brimstone opposition to taxes among many in a state that still has “Heart of Dixie” on its license plates, officials never stopped collecting a property tax that once funded the Alabama Confederate Soldiers’ Home, which closed 72 years ago. The tax now pays for Confederate Memorial Park, which sits on the same 102-acre tract where elderly veterans used to stroll.
The tax once brought in millions for Confederate pensions, but lawmakers sliced up the levy and sent money elsewhere as the men and their wives died. No one has seriously challenged the continued use of the money for a memorial to the “Lost Cause,” in part because few realize it exists; one long-serving black legislator who thought the tax had been done away with said he wants to eliminate state funding for the park.
These days, 150 years after the Civil War started, officials say the old tax typically brings in more than $400,000 annually for the park, where Confederate flags flapped on a recent steamy afternoon. That’s not much compared to Alabama’s total operating budget of $1.8 billion, but it’s sufficient to give the park plenty of money to operate and even enough for investments, all at a time when other historic sites are struggling just to keep the grass cut for lack of state funding. 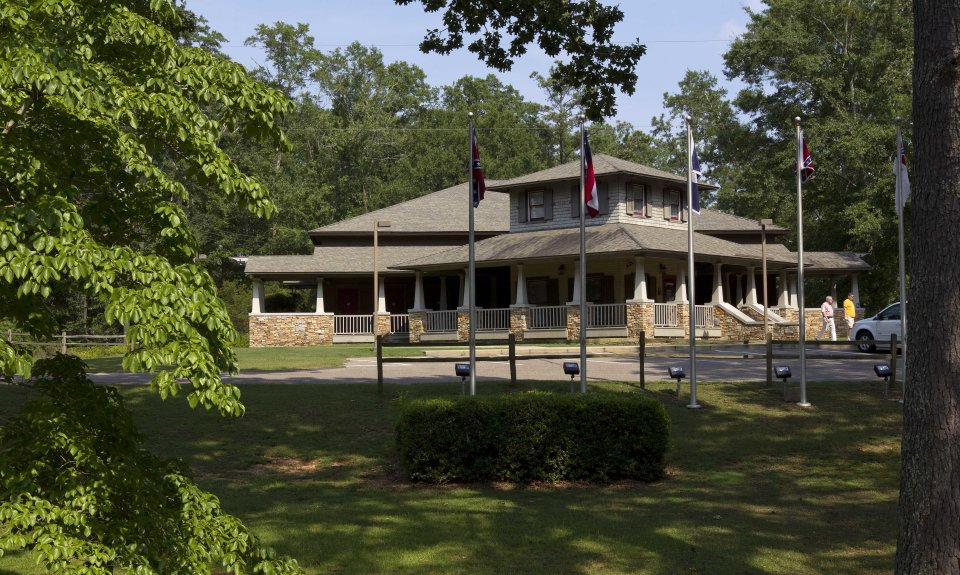 “It’s a beautifully maintained park. It’s one of the best because of the funding source,” said Clara Nobles of the Alabama Historical Commission, which oversees Confederate Memorial Park.
Longtime park director Bill Rambo is more succinct.
“Everyone is jealous of us,” he said.
Tax experts say they know of no other state that still collects a tax so directly connected to the Civil War, although some federal excise taxes on tobacco and alcohol first were enacted during the war to help fund the Union.
“Broadly speaking, almost all taxes have their start in a war of some sort,” said Joseph J. Thorndike, director of a tax history project at Tax Analysts, a nonprofit organization that studies taxation.
Alabama’s tax structure was enshrined in its 1901 Constitution, passed after Reconstruction at a time when historians say state legislators’ main goal was to keep power in the hands of wealthy white landowners by disenfranchising blacks and poor whites.
The Constitution allowed a state property tax of up to 6.5 mills, which now amounts to $39 annually on a home worth $100,000. Of that tax, 3 mills went to schools; 2.5 mills went to the operating budget; and 1 mill went to pensions for Confederate veterans and widows.
The state used the pension tax to fund the veterans home once it assumed control of the operation in 1903. The last Confederate veteran living at the home died in 1934, and its hospital was converted into apartments for widows. It closed in 1939, and the five women who lived there were moved to Montgomery.
Legislators whittled away at the Confederate tax through the decades, and millions of dollars that once went to the home and pensions now go to fund veteran services, the state welfare agency and other needs. But the park still gets 1 percent of one mill, and its budget for this year came to $542,469, which includes money carried over from previous years plus certificates of deposit. 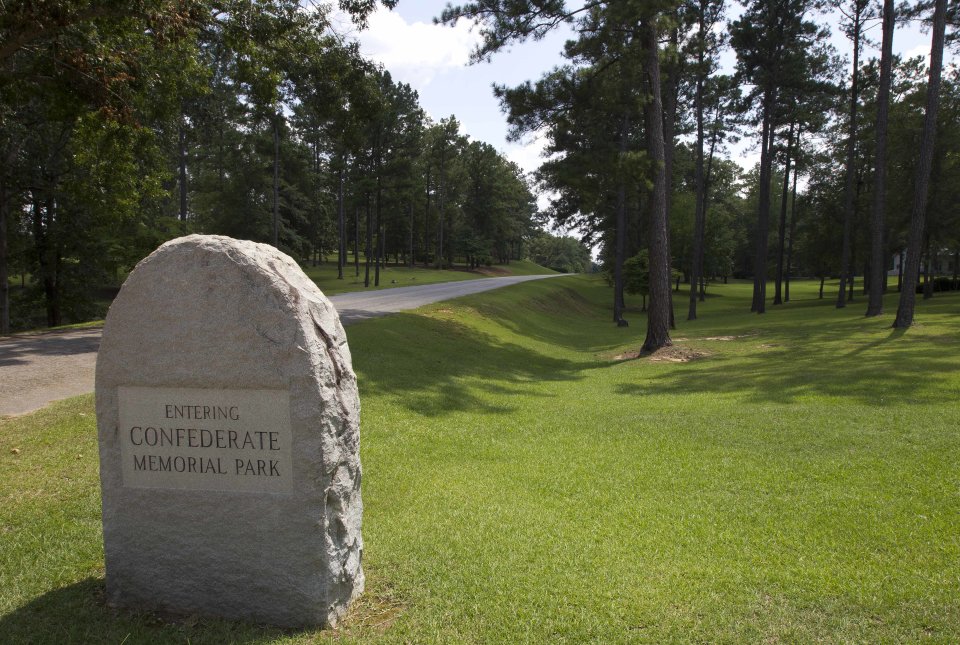 All that money has created a manicured, modern park that’s the envy of other Alabama historic sites, which are funded primarily by grants, donations and friends groups. Legislators created the park in 1964 during a period that marked both the 100th anniversary of the Civil War and the height of the civil rights movement in the Deep South.
Nothing is left of the veterans home but a few foundations and two cemeteries with 313 graves, but a museum with Civil War artifacts and modern displays opened at the park in 2007. Rebel flags fly all around the historic site, which Rambo said draws more than 10,000 visitors annually despite being hidden in the country nine miles and three turns off Interstate 65 in the central part of the state.
While the park flourishes quietly, other historic attractions around the state are fighting for survival.
Workers at Helen Keller’s privately run home in northwest Alabama fear losing letters written by the famed activist because of a lack of state funding for preservation of artifacts. On the Gulf Coast at Dauphin Island, preservationists say the state-owned Fort Gaines is in danger of being undermined by waves after nearly 160 years standing guard at the entry to Mobile Bay.
The old Confederate pension tax that funds the park has never been seriously threatened, Rambo said. Backers were upset this year when Gov. Robert Bentley’s budget plan eliminated state funding for historic sites because of tight revenues, he said, but the park’s earmarked funding survived. 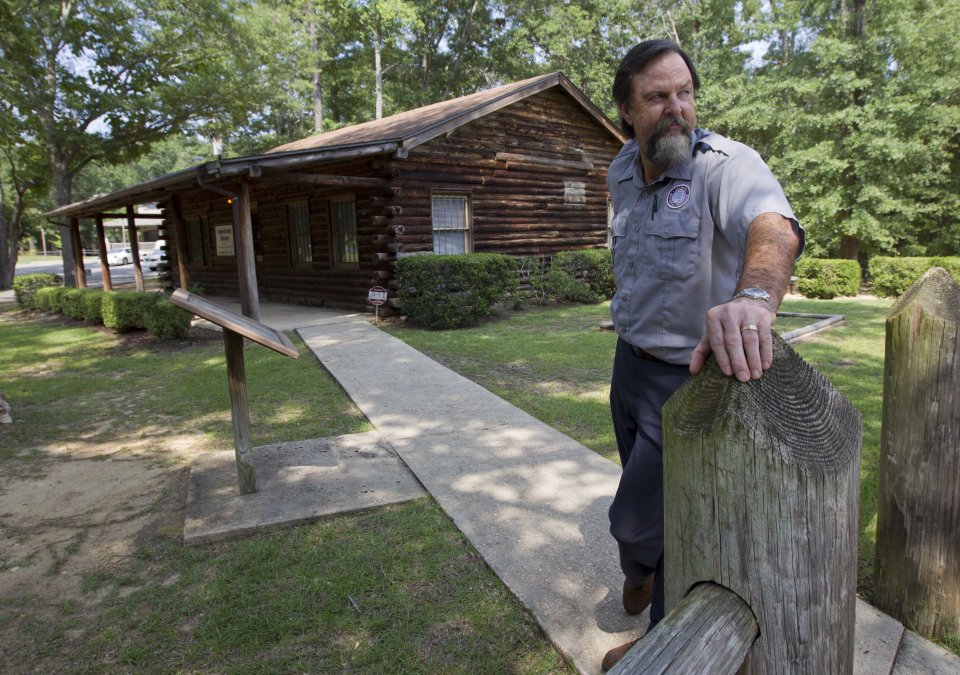 “Once I informed the public what was going on the support just rose up,” said Rambo, the director since 1989. Two heritage groups, the Sons of Confederate Veterans and United Daughters of the Confederacy, led the charge, but ordinary citizens complained too, he said.
“Some were people who don’t belong to those organizations who really like the park and come out here for picnics and all and were really upset,” he said.
State Rep. Alvin Holmes, a black Democrat who’s been in the Legislature since 1974, said he thought funding for the park had been slashed.
“We should not be spending one nickel for that,” said Holmes, of Montgomery. “I’m going to try to get rid of it.”
Holmes may have a hard time gaining support with Republicans in control of Legislature and the governor’s office.
In the meantime, a contractor recently measured the museum for a new paint job, and plans calls for using invested money to construct replicas of some of the 22 buildings that stood on the site when it was home to hundreds of Confederate veterans and their wives.

Henry Highland Garnet: Minister Who Called for Black Slaves to Rebel and Claim Their Freedom