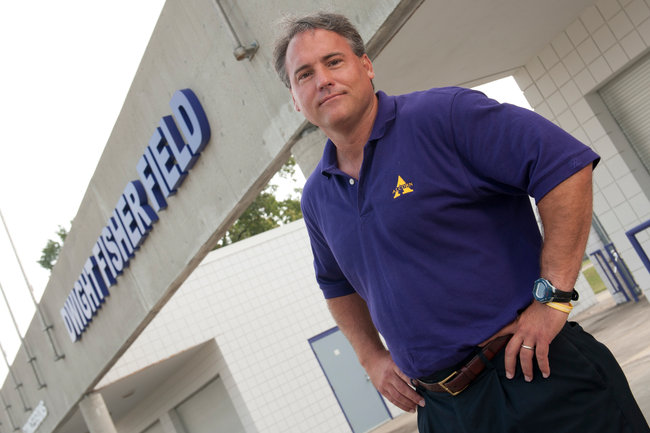 The hiring of a football coach at Alcorn State stretches the definition of news. The revolving door to that particular office has spun almost nonstop since 2008, slowing eight times for someone to exit or enter.

The latest appointment, though, was different. When Marvin Aikerson, a retired school administrator in Atlanta and a 1970 graduate of Alcorn, heard about it, he phoned his brother, who works in the university’s cafeteria, for confirmation and details.

“He was quick to say, ‘And the coach is white!’ ” Aikerson said.

Alcorn plays in the Southwestern Athletic Conference, which is made up of historically black colleges and universities, and has never had a nonblack head football coach in the program’s 92-year history. That changed last month when Jay Hopson was hired by Alcorn, whose football team was 2-8 last season and has struggled in the years since quarterback Steve McNair became a star there in the early 1990s.

For the extended Alcorn community, and for historically black colleges and universities in general, this was news of a stop-the-presses variety.

“I was kind of shocked at first,” Aikerson said. “I support it. We want a team that’s outstanding, and color has no bearing.”

Aikerson grew up in the segregation era on property that abutted the university’s campus in unincorporated Lorman, Miss. Several relatives have worked there. His grandfather delivered the steps that were installed in front of the university’s chapel. “Deeply embedded” is how he describes his family’s ties with Alcorn, the nation’s first historically black land-grant institution.

“I never would have dreamt this,” Aikerson said. “But you’ve got to think out of the box.” 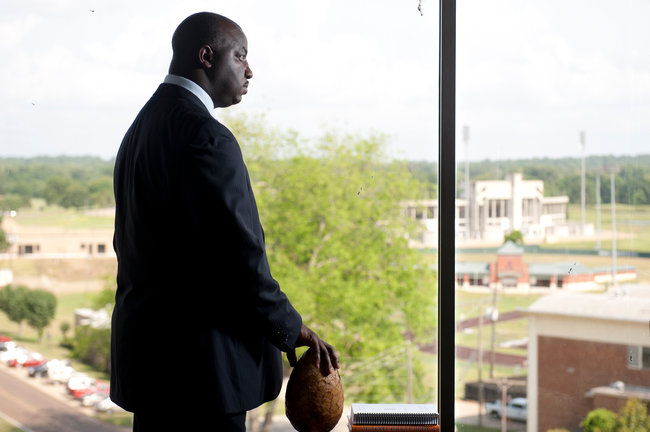 Conventional thought does not suit Alcorn’s president, M. Christopher Brown II, who led the hiring process and focused on Hopson from the beginning. Hiring a head coach is a duty that customarily falls primarily to the athletic director, but Alcorn is on its third A.D. this year, making the already aggressive Brown that much more determined to pilot the search.

Brown, who had hired a white man to be Alcorn’s first officer of diversity, attended integrated schools with black principals while growing up in Charleston, S.C.

“It allowed me, with a unique blend, to see possibilities,” he said, saying his aim was “maintaining history while embracing progress.”

The race of a coach is rarely mentioned by a university when it announces a hire, but Alcorn emphasized Hopson’s. It was, Brown readily acknowledged, a move that was at least partly intended to make a statement.

“That Alcorn will seek out the best candidates we can,” he said. “This comes at the right time in our history. It is a historic step forward.”

Alluding to Alcorn’s two other white head coaches in tennis and golf, and the fact that nearly 9 percent of the student body is white — high compared with other historically black colleges and universities — Brown said, “As demographics change and students can make different selections on where to go to school, we have to be conscious of the kind of campus we offer them.”

No alumni objected directly to Brown, but he did detect enough murmured grumbling during the winnowing of applicants — mainly from older members of the Alcorn community who remembered more prejudicial times — to say that “2 percent or less” disapproved of a white coach.

Brown said he realized some were thinking: “Is this something we want to do? Is this something that any H.B.C.U. should be doing?” Brown has a broader vision for the university, and enjoys pointing out that the diverse nursing program is among Alcorn’s most well-regarded academic tracks.

He pursued Hopson soon after it was decided that Melvin Spears would not be returning as coach next season. Brown continued even after Hopson’s interest in the position waned as a result of the athletic department’s limited budget. (Hopson will earn $150,000, less than many assistant coaches at high-profile Football Bowl Subdivision teams in the South.)

Brown’s interest stemmed from Hopson’s roots in the rural area — the closest McDonald’s is nearly 30 miles from campus — and a résumé sprinkled with stops at places like Florida, Louisiana State, Michigan and Mississippi.

Another H.B.C.U., Savannah State, hired a white football coach in recent years, but that ended in a public fight between the two sides.

The coach, Robby Wells, announced his resignation after the 2009 season, his second at the Georgia university, then filed a lawsuit that claimed he was fired for racial reasons. Wells received $240,000 from a settlement in which the university denied the accusations.

Brown said he examined the case and concluded that the situation was not similar to Alcorn’s.

Other than seeing a Twitter message saying that “Armageddon will come tomorrow,” Brown said, he has detected no real push against the hire, though he added, “It may still happen.”

A poor on-field performance could encourage that. The Braves have not finished above .500 since 2007, and attendance at games has plunged.

“This is a very bold move by the president,” Aikerson said. “If it’s not successful, he’s going to really feel it.”

Terry Sadler, a 2000 graduate and the head of the alumni association’s Atlanta chapter, said he typified the younger segment of Alcorn graduates who endorsed the move.

“Dr. Brown’s decision was a wise one,” said Sadler, who works as a correctional officer. “I’m a hundred percent behind it.” Sadler has heard from only one dissenter, a much older graduate, who argued that an equally qualified black coach could have been found.

Percy Norwood, a 1968 graduate who lives in Mississippi and is the national alumni president, echoed Sadler’s assessment. “What I’m hearing is, we wholeheartedly support the selection,” he said. “It’s all about, Can he win?”

The former N.F.L. tight end Jimmie Giles, among the most prominent of the roughly 50 professional players Alcorn has produced, called Hopson to convey his best wishes and offer support.

Like many of his peers, Giles was surprised when he heard a white coach had been hired, but said, “His credentials are there.” As for the naysayers, “they’ll come around eventually if the guy is successful,” he said.

Successful hardly describes Hopson’s previous stint. Two games into last season, at which point Memphis had allowed 106 points, he was ousted as defensive coordinator and resigned rather than accept a demotion. He was a graduate assistant during his time with L.S.U. and Florida. Still, Hopson points out that he has been on staffs that have won a total of seven division or overall conference titles and he has been on the sidelines for two national championship games. He has also dealt with serious adversity, surviving bouts of testicular cancer in 1995 and 2007.

Since being hired, he has concentrated on assembling a staff — which will include the former player Fred McNair, the brother of Steve McNair — and seems oblivious to the attention he has received.

“I’m just a football coach,” he said. The notion of coaching at Alcorn “has been dancing in the brain for a while” following overtures dating more than a decade ago from alumni. “This is too good to pass up,” he said.

“This is my home area,” Hopson said. “It’s just a situation that, for me, is natural.” On Mother’s Day, as the courtship was again heating up, Hopson asked Brown about the racial makeup of the prospective coaching staff.

Brown assured him that were no limitations with the coaches, nor with the team, which has included white players as well as Samoans and Latinos. “I just want him to put the best players out there,” Brown said.

Sadler is excited enough to be planning trips to games. So is Aikerson, who moved to Atlanta from suburban Chicago for easier access to the campus.

Both intend to attach the university’s purple-and-gold flags to their SUVs and then proudly and eagerly drive west on Interstate 20 as often as they can this fall.

“Give him a chance” is Sadler’s message to his fellow alumni, hoping that agitation among the disgruntled few will eventually subside for a football program already roiled by upheaval.