Born in Florence, he was recognized as the only son ofLorenzo II de’ Medici (grandson of Lorenzo de’ Medici, the Magnificent), but many scholars today believe him to be in fact the illegitimate son of Giulio de’ Medici (later Pope Clement VII), nephew of Lorenzo de’ Medici, the Magnificent. Historians (such as Christopher Hibbert) believe he had been born to a mulatto servant who was working in the Medici household, identified in documents as Simonetta da Collevecchio. The nickname is said to derive from his features (Hibbert 1999: 236).

The Emblem of Alessandro de’ Medici, based on Dürer’s Rhinoceros, with the motto “Non buelvo sin vencer” (old Spanish for “I shall not return without victory”).[3] (From Paolo Giovio’s Dialogo dell’impresse militari et amorosi, 1557.) 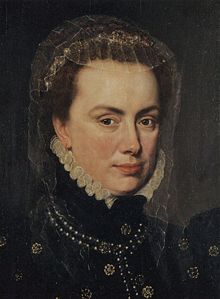 When Emperor Charles V sacked Rome in 1527, the Florentines took advantage of the turmoil in Italy to reinstall the Republic; both Alessandro andIppolito fled, along with the rest of the Medici and their main supporters, including the Pope’s regent, Cardinal Silvio Passerini, with the exception of the eight-year-old Catherine de’ Medici, who was left behind. Michelangelo, then occupied in creating a funerary chapel for the Medici, initially took charge of building fortifications around Florence in support of the Republic; he later temporarily fled the city. Clement eventually made his peace with the Emperor, and with the support of Imperial troops, the Republic was overwhelmed after a lengthy siege, and the Medici were restored to power in the summer of 1530. Clement assigned Florence to nineteen-year-old Alessandro, who had been made a duke, an appointment that was purchased from Charles. He arrived in Florence to take up his rule on July 5, 1531, and was made hereditary Duke of Florence 9 months later by the Emperor (for Tuscany lay outside the Papal States), thereby signalling the end of the Republic (Hibbert 1999: 250–252; and Schevill 1936: 482, 513–514).
His many enemies among the exiles declared that his rule was harsh, depraved and incompetent, an assessment debated by later historians. One relic of his rule sometimes pointed out as a symbol of Medici oppression is the massive Fortezza da Basso, today the largest historical monument of Florence. In 1535 the Florentine opposition sent his cousin Ippolito to appeal to Charles V against some actions of the Duke, but Ippolito died en route; rumors were spread that he had been poisoned at Alessandro’s orders (Hibbert 1999: 254).
In a late replay of the kind of medieval civil politics that had long revolved around pope and emperor, commune and lord, the Emperor supported Alessandro against the republicans. In 1536, he married his natural daughterMargaret of Austria to Alessandro. For his own inclinations, Alessandro seems to have remained faithful to one mistress, Taddea Malaspina, who bore his only children Giulio de’ Medici (c. 1540-1600), who also had illegitimate issue, and Giulia de’ Medici, who married her cousin Bernardetto de’ Medici, Signore di Ottaiano, and had issue. 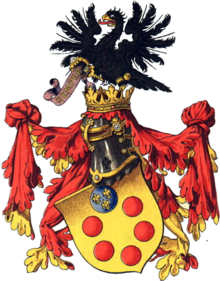 Four years later his distant cousinLorenzino de’ Medici, nicknamed “Lorenzaccio” (“bad Lorenzo”), assassinated him. (This event is the subject of Alfred de Musset’s play “Lorenzaccio.”) Lorenzino entrapped Alessandro through the ruse of a promised arranged sexual encounter with Lorenzino’s sister Laudomia, a beautiful widow. For fear of starting an uprising if news of his death got out, Medici officials wrapped Alessandro’s corpse in a carpet and secretly carried it to the cemetery of San Lorenzo, where it was hurriedly buried.
In Valladolid (Spain), where was established the imperial court of Charles V, were celebrated a solemn funeral.
Lorenzino, in a declaration published later, said that he had killed Alessandro for the sake of the republic. When the anti-Medici faction failed to rise, Lorenzino fled to Venice, where he was killed in 1548. The Medici supporters (called “Palleschi“ from the balls on the Medici arms) ensured that power then passed to Cosimo I de’ Medici, the first of the “junior” branch of the Medici to rule Florence.
Alessandro was survived by two natural children of Taddea’s: a son, Giulio (aged four at the time of his father’s death) married to Lucrezia Gaetani, and a daughter, Giulia married firstly to Francesco Cantelmo, the Count of Alvito and the Duke of Popoli and then Bernadetto de’ Medici, prince of Ottaiano.

The first black people ever photographed in Britain