March 5, 2013, 10:45 am
By RONALD S. CODDINGTON
African-American volunteers poured into the ranks of the 54th Massachusetts Infantry from across the Bay State during the early months of 1863; conspicuous among the patriotic towns that sent their black sons off to war was New Bedford. The seafaring city, with its large population of escaped slaves, had been targeted early on as a prime spot for recruits, and among those who enrolled in the new regiment was Alex Johnson, a 16-year-old sailor with a passion for percussion.
Johnson enlisted as a musician on March 2, 1863. He told an interviewer long after the war that Robert Gould Shaw, the colonel and commander of the 54th, had called him “the original drummer boy.” Others recognized Johnson as the first black musician to enlist in the Army during the war, though technically he was not the first; at least three others enlisted as musicians in the regiment before he did. Nevertheless, he earned the reputation as the Union Army’s consummate black drummer boy. 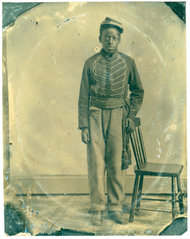 Courtesy of the Massachusetts Historical Society Alexander Howard Johnson pictured as a musician in the Fifty-fourth Massachusetts Infantry, circa 1863.

Johnson told the same interviewer that he had “beat a drum every day he has been able since childhood.” Born Alexander Howard in New Bedford, for unknown reasons he was separated from his parents before his fifth birthday. Orphaned and alone, his plight came to the attention of William Henry Johnson, an influential local black man. Once a slave in Virginia, Johnson had fled to Massachusetts in his youth and had became a strong voice for antislavery forces. He adopted the boy and raised him as his own child.
When the war came, the elder Johnson became a staunch advocate for the service of African-Americans in the Union Army. His pro-military attitude most likely influenced his adopted son’s decision to enlist in the 54th.
Young Johnson quickly established himself as a talented drummer as he and the rest of the rank and file learned the art of soldiering. He was with the unit when it left Boston for James Island, S.C., where it fought its first battle.
The skirmish, along the South Carolina coast near Charleston, occurred on July 16, 1863. Johnson noted, “We fought from 7 in the morning to 4:30 in the afternoon, and we succeeded in driving the enemy back. After the battle we got a paper saying that if Fort Wagner was charged within a week it would be taken.”
Two days later the 54th stormed Confederate-held Fort Wagner on Morris Island. 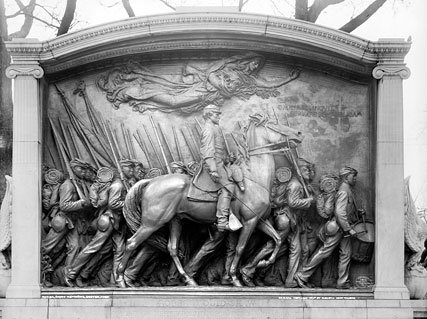 Library of CongressThe Shaw Memorial by sculpture Augustus Saint-Gaudens in Boston, Massachusetts, circa 1897; the drummer boy is at the far right.

Johnson recounted, “Most of the way we were singing, Col. Shaw and I marching at the head of the regiment. It was getting dark when we crossed the bridge to Morris Island. It was about 6:30 o’clock when we got there. Col. Shaw ordered me to take a message back to the quartermaster at the wharf, who had charge of the commissary. I took the letter by the first boat, as ordered, and when I returned I found the regiment lying down, waiting for orders to charge. The order to charge was given at 7:30 o’clock.”
Johnson remembered, “Before he gave that order, Col. Shaw asked the boys if they would stand by him. ‘We will, father!’ they yelled. They always called him father. He then gave the order to rise and charge bayonets, at a double quick.”
Johnson and his drum probably remained behind as the 600-strong 54th advanced (fans of the film “Glory” will remember that in the final scene, just before the charge on Fort Wagner, the drummers are dismissed to the rear to serve as stretcher-bearers). Luis Emilio, an officer in the regiment who participated in the attack, reported in the regimental history, “The enemy opened on us a brisk fire, our pace now gradually increasing till it became a run. Soon canister and musketry began to tell on us. With Colonel Shaw leading, the assault was commenced.”
Shaw and his men climbed the ramparts under a galling fire that wreaked havoc on the ranks and continued undeterred up the sandy slope to the parapet. The Confederate defenders, Emilio recalled, “obstinately contested with the bayonet our advance. Notwithstanding these difficulties, the men succeeded in driving the enemy into the fort. It was here upon the crest of the parapet that Colonel Shaw fell.” An enlisted man who stood next to Shaw remembered that the colonel was waving his sword and crying “Forward, Fifty-fourth!” when he was struck down.
The fighting raged for almost an hour before the regiment was forced to withdraw. The 54th suffered 272 killed, wounded and missing out of the 600 who participated in the charge. “It was a hard fight,” Johnson observed. “We lost our good colonel.”
The 54th forever distinguished itself that day. It proved to all Americans that black men could fight on par with, and possessed moral courage equal to, the bravest white soldier. William F. Fox, in his treatise “Regimental Losses in the American Civil War,” canonized the 54th Massachusetts Infantry as one of his “Three Hundred Fighting Regiments” in the Union Army, in grim recognition of its high casualty rate.
Johnson remained in the 54th until the end of the war. He mustered out with the survivors in the summer of 1865 and returned to Massachusetts. He brought the drum that he carried at Fort Wagner with him.
Four years later he married, settled in Worcester, Mass., and organized “Johnson’s Drum Corps.” He led the band as drum major, and styled himself “The Major.”
“He is probably one of the best drummers in Massachusetts, and boasts that there is hardly a drummer who marches the streets of Worcester who has not received instruction from him,” declared the writer who interviewed him long after the war.
In 1897, a memorial to the 54th sculpted by the artist Augustus Saint-Gaudens was unveiled in Boston. The bronze relief depicts Colonel Shaw and his men leaving Boston for the South with a young drummer in the lead — a scene reminiscent of the July day in 1863 when Shaw and Johnson marched at the head of the 54th to its destiny at Fort Wagner.
A reviewer noted, “The sculpture set in the wall of Boston common is one fit for so great a significance. It seems hardly too much to say that in the way of heroic memorial there has been nothing nobler done. It is the work of profound and serious thought. How easy would have been a simple portrait statue of the young colonel on his horse, — a monument, but to a man whose place the passing eye would have no knowledge of without consultation of histories; but here it is, an epochal record, set forth in enduring bronze, and so inscribed that none need ask why these stones were raised.”
In 1904, Johnson visited the monument during an event hosted by the Grand Army of the Republic, the influential association of Union veterans. He pointed out the resemblance of the young lead drummer to himself to those gathered around him. All agreed that the likeness was very noticeable. This was, however, only a coincidence, as Saint-Gaudens based the figures of the African-Americans on hired models.
The drum carried by Johnson at Wagner remained in his possession as late as 1907, and he undoubtedly still owned it upon his death in 1930 at age 83.
Sources: Worcester (Mass.) Telegram, Sept. 29, 1907; Luis F. Emilio, “History of the Fifty-Fourth Regiment of Massachusetts Volunteer Infantry, 1863-1865”; Alexander H. Johnson military service record, National Archives and Records Service; The War of the Rebellion: A Compilation of the Official Records of the Union and Confederate Armies; William F. Fox, “Regimental Losses in the American Civil War, 1861-1865”; Alexander H. Johnson pension record, National Archives and Records Service; Springfield Republican (Springfield, Mass.), June 1, 1907.

US Defense Department paid 14 NFL teams $5.4M to use games to recruit