Alex ‘Tracks’ McFarland, from New York City, plies his trade on the city’s subway system and usually takes home around $150 a day.

He said he started doing it at the age of 11, not because he had to but because he wanted to earn his own money. 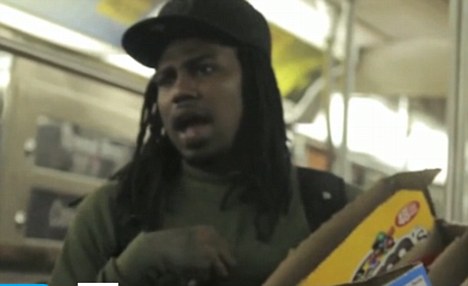 The candy king: Alex ‘Tracks’ McFarland has been selling candy on the subway for 13 years, starting when he was 11

With his 13 years of experience behind, Tracks is now one of the candy kings of the public transportation system.

His box of goodies caters to a variety of tastes, jobs.aol.com reports.

Peanut M&Ms is his biggest seller but for the healthy eaters there are trail mix bars.

For gummy fans there are Welch’s Fruit Snacks and ‘for people who claim they don’t eat candy’ he’s got Famous Amos chocolate chip and shortbread. 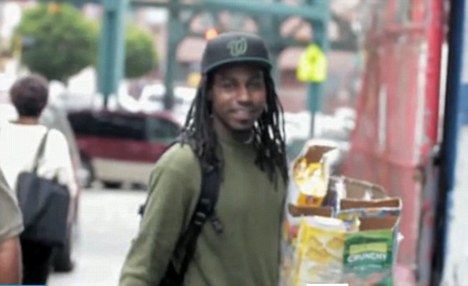 ‘These M&Ms, I take care of my family with this,’ he says with a smile.

Tracks began peddling candy to get himself out of ‘the hood.’

He says he’s offering a valued service by helping to boost the blood sugar of wilting travellers.

He describes his role in his own quick rap: ‘I do what I gotta do, just to stay on my feet.