By CHEYENNE MACDONALD FOR DAILYMAIL.COM

Around 72,000 years ago, a group of migrants began the journey out of Africa that would ultimately shape the future of humanity.

According to new research, this single wave of travelers gave rise to all non-African populations alive today.

In the first major genomic study of Aboriginal Australians, researchers have confirmed that along with European and Asian ancestral groups, Papuan and Australian genomes too can be traced back to this migration.

The new evidence supports the idea that there was just ‘one exit event’ – but once out of Africa, the Papuan and Aboriginal ancestors branched off early on, with some eventually reaching Australia, where they would remain isolated from the rest of the world for thousands of years. 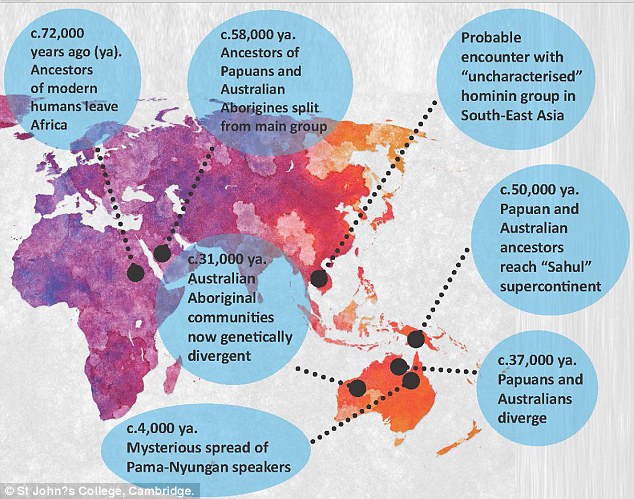 New evidence supports the idea that there was just ‘one exit event’ – but once out of Africa, the Papuan and Aboriginal ancestors branched off early on, with some eventually reaching Australia, where they would remain isolated from the rest of the world for thousands of years

KEY FINDINGS OF THE STUDY

The researchers found that the ‘overwhelming majority’ of non-African populations stem from a single migration from Africa 72,000 years ago.

Along with this, they found evidence that Aboriginal Australians are descended directly from the first people to inhabit Australia.

And, the DNA revealed traces of DNA which suggest modern humans interbred with an early human species that has not yet been characterized as they migrated through Asia.

The researchers also say there appears to be a mysterious dispersal that occurred in Australia roughly 4,000 years ago.

While these migrants shaped speech and thought, they experienced a ‘ghost-like’ disappearance.

In the study, published to the journalNature, an international team of experts collaborated with elders and leaders from various Aboriginal Australian communities, along with numerous other organizations.

The researchers sequenced the genomes of 83 Aboriginal Australians and 25 Papuans from New Guinea, using DNA from saliva to reveal new insight on the origins of modern human populations.

‘The study addresses a number of fundamental questions about human evolution – how many times did we leave Africa, when was Australia populated, and what is the diversity of people in and outside Australia?’ said Professor Eske Willerslev, who led the research and holds posts at St John’s College, University of Cambridge, the Sanger Institute and the University of Copenhagen.

‘Technologically and politically, it has not really been possible to answer those questions until now.

‘We found evidence that there was only really one wave of humans who gave rise to all present-day non-Africans, including Australians.’

The analysis led to a number of findings on the population of Australia, which has one of the longest histories of continuous human occupation.

While earlier theories have suggested that Papuans and Australians originated from an earlier migration event, the new study indicates this was not the case.

‘Our results suggest that, rather than having left in a separate wave, most of the genomes of Papuans and Aboriginal Australians can be traced back to a single ‘Out of Africa’ event which led to modern worldwide populations,’ said Dr Manjinder Sandhu, a senior author from the Sanger Institute and University of Cambridge.

‘There may have been other migrations, but the evidence so far points to one exit event.’ 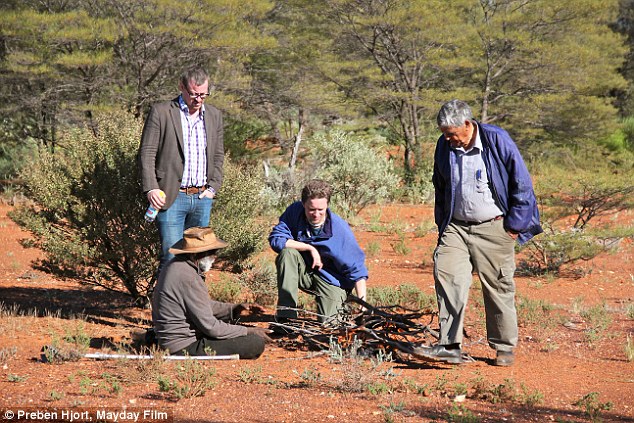 In the study, an international team of experts collaborated with elders and leaders from various Aboriginal Australian communities. Pictured, Professor Eske Willerslev speaks with Aboriginal elders in the Kalgoorlie area in southwestern Australia in 2012

Australia has been occupied by humans for roughly 50,000 years, and the researchers say the Papuan and Australian ancestors split off from the first migration group about 58,000 years ago.

The European and Asian ancestral groups did not become distinct until around 42,000 years ago.

After this initial split, the researchers say several other divergences occurred; the Papuans and Aboriginal Australians split roughly 37,000 years ago.

Many years later, these populations became physically separated by water.

It wasn’t until much later that the Aboriginal communities regained contact with the rest of the world’s populations, first with Asian communities and then European travelers in the 18th century.

The researchers say there may have been an internal migration within Aboriginal culture roughly 4,000 years ago.

Today, about 90 percent of Aboriginal communities speak languages in the ‘Pama-Nyungan’ linguistic family.

According to the researchers, these people stem from the founding population, which split from the Papuans 37,000 years ago before further diverging.

But, experts say the Pama-Nyungan languages are much younger than this, and can be traced back just 4,000 years.

This has long baffled scientists, who wondered how two separately isolated communities came to share the same younger language family.

While previous theories suggested this was the result of a second migration, the study now shows that this is not the case.

The researchers found signs of a ‘tiny gene flow,’ which indicates migration from north-east Australia across the continent.

This may have occurred at around the time the Pama-Nyungan language and stone tool technologies emerged.

The researchers say these migrants likely had a strong influence on the culture of the continent – but, genetic evidence of these people has disappeared even as their culture and language persists.

According to the researchers, most Aboriginal communities were genetically isolated from each other by 31,000 years ago, likely the result of environmental barriers, including an impassable desert.

‘The genetic diversity among Aboriginal Australians is amazing,’ said Assistant Professor Anna-Sapfo Malaspinas, from the Universities of Copenhagen and Bern, a lead author on the study.

‘Because the continent has been populated for such a long time, we find that groups from south-western Australia are genetically more different from north-eastern Australia, than, for example, Native Americans are from Siberians.’

The study also revealed that traces of DNA from an ancient, extinct human species fund in Aboriginal Australians could be from a species that has not yet been characterized. 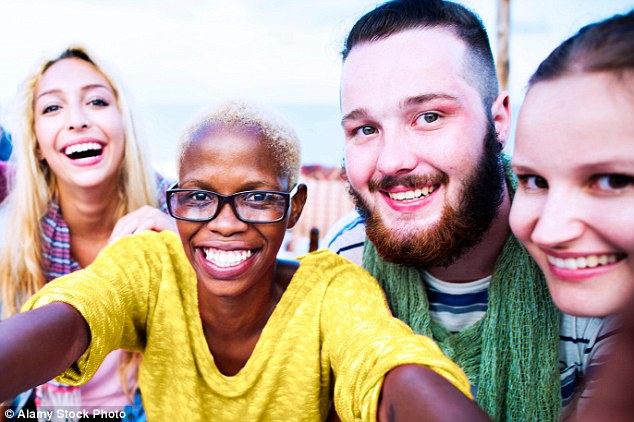 Around 72,000 years ago, a group of migrants began the journey out of Africa that would ultimately shape the future of humanity. According to new research, this single wave of travelers gave rise to all non-African populations alive today. A stock image is pictured

It was previously thought that this stemmed from encounters with a group known as Denisovans.

‘We don’t know who these people were, but they were a distant relative of Denisovans, and the Papuan/Australian ancestors probably encountered them close to Sahul,’ said Willerslev.

Along with this, the researchers say a mysterious dispersal may have occurred within Aboriginal culture roughly 4,000 years ago from the northeastern part of Australia – but these migrants, who are thought to have defined the way in which people spoke and thought, disappeared in a ‘ghost-like’ manner.

‘They change the way people speak and think; then they disappear, like ghosts. And people just carry on living in isolation the same way they always have.

‘This may have happened for religious or cultural reasons that we can only speculate about. But in genetic terms, we have never seen anything like it before.’