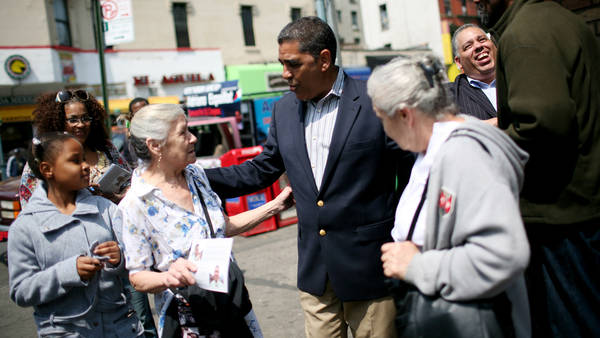 Adam Clayton Powell Jr. knew what his priorities were when he campaigned to become the first congressman to represent a new district centered in Harlem. 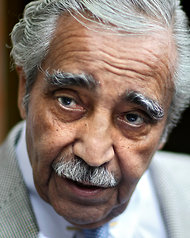 In the decades since, the so-called Harlem seat has been held by only two men, Mr. Powell and the man who unseated him in 1970, Representative Charles B. Rangel, each of whom became among the most influential African-American voices in the nation’s capital, representing a neighborhood known as a center of black arts and culture, scholarship and struggle.

But as demographic change has altered the makeup of Upper Manhattan — Harlem has become less black and neighborhoods around it more Hispanic — black politicians are concerned that they might lose this prized pulpit.

Under new boundaries imposed by a federal court as part of the reapportionment process every 10 years, the district has been extended into the Bronx, and more than half of its population is now Hispanic. In the Democratic primary, Mr. Rangel faces challenges from a Dominican-born state legislator, Senator Adriano Espaillat, who argues that it is time for his community to be represented in Congress, as well as from two African-American candidates: Clyde Williams, the former national political director for the Democratic National Committee, and Joyce Johnson, a former local Democratic district leader.

Mr. Rangel, 81, is well known and has organizational and fund-raising advantages heading into what is expected to be a low-turnout June 26 primary — and the primary will probably be decisive in this overwhelmingly Democratic district. But the race is likely to be tough, not only because of changing demographics and boundaries, but also because Mr. Rangel has faced ethics charges and health problems. And, whoever wins this year, some black civic leaders worry that a black candidate would not be a lock to win the seat whenever Mr. Rangel leaves office.

“It certainly jeopardizes the future of this great tradition,” Mr. Paterson said, “not only for the greater Harlem community, but for all of the many around the country who look to that venue for leadership on key issues.”

Mr. Espaillat seems to be attempting to strike an emotional chord with the Dominican community. His Web site begins with a video showing scenes of Washington Heights while Latin music plays in the background. One of his staffers then speaks in Spanish about the chance to elect the country’s first Dominican-born congressman.

“I find that in the district, there’s a great deal of discontent,” Mr. Espaillat said in an interview. “People want a change.”

Ms. Johnson said the fact that more than half the district was female should not be overlooked, especially at a time when Democrats felt that Republicans were attacking women’s rights. Though she is primarily promoting her background in politics and community advocacy, Ms. Johnson said, “there is a benefit, too, that I’m a woman at this time.”

Mr. Williams, who has worked for Presidents Obama and Clinton, said he was the only one of Mr. Rangel’s challengers who had worked in Washington politics.

“I think it’s time for new ideas,” he said, “to have someone who has some understanding of how to get things done.”

But many see a tall task for Mr. Espaillat and the other challengers, in part because they could split the anti-Rangel vote and in part because Mr. Rangel, whose mother was black and his father Puerto Rican, already has established support among Hispanics. Mr. Rangel won re-election with more than half the vote two years ago, despite a major ethics scandal that led to his censure for violations including failure to pay taxes and improper solicitation of fund-raising donations. Even before he was censured, Mr. Rangel was forced to relinquish his cherished role as chairman of the House Ways and Means Committee.

This year, critics have highlighted the fact that Mr. Rangel’s back problems kept him from Congress for more than two months. But some political leaders say they believe it will be difficult to use his shortcomings against him.

Representative Charles B. Rangel talking with children on West 125th Street a month after he was elected to Congress in 1970.

“Rangel’s an institution,” said Adam Clayton Powell IV, Mr. Powell’s son, who unsuccessfully challenged Mr. Rangel in the last election. “I got my spanking two years ago; Espaillat will get his spanking now.”

The Congressional seat was created in 1944 in a reapportionment that ended the practice of slicing up Harlem as part of multiple districts, which diluted the neighborhood’s political power. Mr. Powell easily won the new seat, which was about 90 percent black and did not extend much beyond Harlem’s boundaries, to become New York State’s first black congressman.

Now, the dilution of black power in the district reflects a changing Harlem, where new developments have priced out many black residents, while non-Hispanic whites and Latinos continue to flood the area.

“I never thought that Harlem would be torn apart, that so much of the district would have to be represented by the Bronx,” Mr. Rangel said. “But that’s the way the numbers run.”

But some say the inability of black and Latino lawmakers to persuade the Legislature to create a seat centered in Harlem — and extended to include communities with significant black populations in Westchester County and the Bronx — also hints at the decreasing power of the city and state’s black political establishment.

The Rev. Al Sharpton was among those who tried to protect a predominantly black district centered in Harlem; he convened black and Latino leaders last month at the Grand Havana Room, a members-only cigar club in a Midtown high-rise, for a testy discussion of their competing political interests as they puffed cigars and sipped drinks like hot tea or gin.

Assemblyman Carl E. Heastie, the Bronx Democratic leader, and Jeanine Johnson, the counsel for Keith L. T. Wright, the Manhattan Democratic leader, had a pointed exchange over how much say Mr. Heastie should have in nominating a successor once Mr. Rangel leaves office. And Rubén Díaz Jr., the Bronx borough president, confronted Mr. Espaillat over the sentiment that he was advocating the creation of a new Congressional district that was primarily Dominican, rather than one with a population representative of the broader Hispanic community. Two people at the meeting said Mr. Espaillat had said, “It’s time for us to have what’s due to us,” although Mr. Espaillat disputed that account.

After about three hours, hugs were exchanged and a tentative agreement was reached to create two Congressional seats that each included Manhattan north of 110th Street: one predominantly African-American and the other mostly Hispanic. But the Legislature was unable to reach a consensus on the issue, and the federal court took over the redistricting process. The court created what the leaders had hoped to avoid: just one district made up of Harlem, Washington Heights and a small part of the Bronx. The population is about 55 percent Hispanic and 27 percent African-American. Hispanics have a lesser advantage at the ballot box: the district’s population of eligible voters is about 45 percent Hispanic and 34 percent African-American.

“It’s absolutely unfortunate,” Mr. Wright said. “You have an emerging community that historically has formed coalitions together, and there’s no reason to pit one community against another when you could have had very much a peaceful coexistence.”

But Mr. Sharpton sounded a note of acceptance.

“At some point,” he said, “it was inevitable that there was going to have to be a readjustment of the political leadership in the community to the reality of the residents.”

How did ex-slave's letter to master come to be?

Take Police Officers Off the School Discipline Beat: Schoolhouse to the Courthouse