Amiri Baraka died Thursday after weeks of failing health, a family spokeperson confirmed. He was 79.

A playwright, poet, critic and activist, Baraka was one of the most prominent and controversial African American voices in the world of American letters.

He was born Everett LeRoi Jones on Oct. 7, 1934, in Newark, N.J. A gifted student, he graduated from high school two years early and went to college at New York University and Howard University. After serving in the Air Force for more than two years, Baraka — then Jones — was dishonorably discharged for reading communist texts.

He then moved to New York, attending graduate school at Columbia University and becoming involved in the Beat scene. In 1958, he founded the avant-garde poetry magazine Yugen, which he co-edited with Hettie Cohen — the two were married from 1960 to 1965. 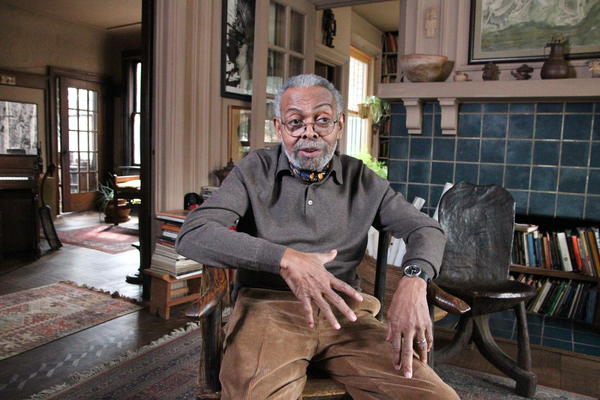 At that time he also co-edited a literary newsletter, The Floating Bear, published “Blues People: The Negro Experience in White America and the Music That Developed from It” (1963) and penned the play “Dutchman,” which explosively explored issues of race and gender.

“I can see now that the dramatic form began to interest me because I wanted to go ‘beyond’ poetry. I wanted some kind of action literature,” Baraka wrote in his 1984 autobiography.

After the 1965 assassination of Malcolm X, Jones changed his name to Imamu Amiri Baraka, moved to Harlem and married his second wife, Amina (formerly Sylvia Robinson).

Inspired in part by a 1960 trip to Cuba and in part by the radical wing of the civil rights movement, he espoused separatist ideas and founded the Black Arts Repertory Theatre and School.

Baraka led the Black Arts Movement, an aesthetic sibling to the Black Panthers. Although the movement was fractious and short-lived, it involved significant authors such as Gwendolyn Brooks, Eldridge Cleaver, Gil-Scott Heron, Nikki Giovanni, Ishmael Reed and Quincy Troupe.

“[W]e wrote art that was, number one, identifiably Afro American according to our roots and our history and so forth. Secondly, we made art that was not contained in small venues,” Baraka said in a 2007 interview. “The third thing we wanted was art that would help with the liberation of black people, and we didn’t think just writing a poem was sufficient. That poem had to have some kind of utilitarian use; it should help in liberating us. So that’s what we did. We consciously did that.”

In Harlem, Baraka sent trucks into the community carrying people — including the artist Sun Ra — performing poetry, dance and music.

Baraka’s work during the 1960s included the plays “The Black Mass,” “The Toilet,” and “The Slave”; the poetry collections “Black Art” and “Black Magic”; and the provocative collection “Home: Social Essays.”

In the late 1960s and into the 1970s, Baraka became deeply involved in a number of organizations working to promote and consolidate African American political power.

In 1980, he began teaching at the State University of New York-Stony Brook, retiring from its African Studies department in 1994. During his long academic career, he taught at Rutgers University, George Washington University, Yale University, San Francisco State University, Columbia and the New School for Social Research.

Baraka made his home in Newark and remained a creative and political force. In 2002, he was named New Jersey’s second poet laureate — and soon became the center of a controversy surrounding his 9/11 poem “Somebody Blew Up America.”

The poem — which pointed out offenses committed, mostly by whites, around the world and throughout history — included controversial lines that were considered anti-Semitic. Before Baraka could serve out his two-year term in the post, the poet laureate position was eliminated.

Asked by NPR in 2007 how he would define himself, Baraka said, “Well, I guess as a poet and a political activist most consistently. I’ve written in all genres. … But, you know, I guess throughout all of that, the poetry is at the base of it.”

Although he was frequently embroiled in political controversy, Baraka’s artistic achievements did not go unacknowledged. His awards include fellowships from the Guggenheim Foundation and the National Endowment for the Arts, a PEN/Faulkner Award, a Rockefeller Foundation Award for Drama, and the Langston Hughes Award from City College of New York.

obituary will appear at latimes.com/obits.