BEFORE dawn, when most New Yorkers are fast asleep, Isaac and Elizabeth Osei have already been working for hours. On a recent morning, Mr. Osei drove his wife from New Jersey to the half-abandoned outer blocks of Midtown Manhattan to oversee the 4:30 a.m. transfer of their fleet of 50 taxis. With Ms. Osei leading the way and a sliver of moon still hanging in the sky, they scouted three square blocks to make sure all of their taxis had been picked up by drivers. Then, over the screeches emanating from auto-body shops and the smell of gasoline wafting from a Hess station crammed with cabs, they surveyed their troubled taxis just as sunlight faintly appeared over Manhattan.
At 6 a.m., they drove to the Upper West Side, reconfigured the spare tires they keep in their trunk and picked up clothing, a mirror and a table, which a friend was donating to a charity drive organized by the Oseis. The couple, who are immigrants from Ghana, struggled to tie the mirror to the roof of their car, then drove back to their Chelsea office lined with worn-out wood paneling and faded carpeting. 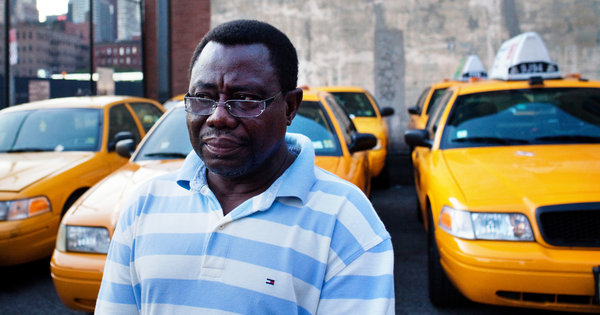 Julie Glassberg for The New York Times—–Isaac Osei, who owns a taxi fleet in New York City with his wife, is also a Ghanaian chief who wears a crown and oversees five towns.

By 7:30, Ms. Osei had taken her place in her thronelike office chair — she is the president of Napasei Taxi Management Corporation, after all — while Mr. Osei, who is vice president, took a more modest seat nearby. Then they prepared for the next 12 hours of fighting parking tickets, getting taxis inspected and helping drivers who came in to pick up their cash.
But the Oseis call this grueling schedule a vacation compared with the real holiday they have ahead. On Wednesday, when they board a flight to Ghana, their roles will suddenly and drastically shift. As they cross the Atlantic Ocean, Mr. Osei will become Nana Gyensare V, a chief of the Akwamu people, who oversees the residents of five towns across the Eastern Region.
After arriving in Accra, the capital of Ghana, he will don a delicate gold crown, take a seat on his throne or stool and work 20-hour days out of his 10-room palace. Rather than focus on taxi tune-ups and inspections, Mr. Osei will assume judicial and other powers, like mediating family disputes. Ms. Osei, who is happiest talking about chassis and alternators, will have to fulfill the responsibilities of a chief’s wife by running women’s groups in each town and helping with preparations for a 1,000-person banquet in September, at which Mr. Osei will bless the yam harvest. Residents are waiting to eat the yams until after Nana Gyensare’s arrival.
“Here we are very busy — but at least I don’t have my people around me here, because I am more free,” Mr. Osei, a stout and succinct man more prone to chuckles than words, said of his life in New York. He nodded at his wife and added, “At times, she gets angry because she can’t even see me.”
Many immigrants in New York lead double lives: restaurant dishwasher in Queens and family patriarch in Mexico, or manicurist in Midtown and financial provider back in China. But Mr. Osei’s story is far more extreme. It’s as if he spends summer vacation with the hybrid responsibilities of a mayor and a royal, said Richard Rathbone, a professor at the University of London’s School of Oriental and African Studies who has done research near the towns Mr. Osei oversees.
As Ghana has grown more stable in recent years, Professor Rathbone said, emigrants are returning and accepting these chiefly roles. They have many of the social responsibilities of politicians, but they also carry the historical gravitas of a royal title.
“He’s connected with the past and he symbolizes the past,” Professor Rathbone said of Mr. Osei.
Mr. Osei, one of 19 children, never expected to be a chief. The title, which passed through his mother’s family, had been given to an older brother, and Mr. Osei moved to New York three decades ago to carve out his own life. He started driving a taxi and bought a medallion in 1982. Within a few years, he had gotten married, had two daughters and had opened a restaurant in Harlem. But he soon divorced and found himself wiped out financially.
Mr. Osei saw Elizabeth Otolizz for the first time when she stopped to eat in his restaurant in the late 1980s and he pointed out that she had spilled okra on her blouse. She moved to New York in 1986 and worked as a home health nurse, a newspaper deliverywoman and a taxi driver. She spilled out stories about the celebrities she had met, like Snoop Dogg, and the times she had been beaten up by customers. She carried in her purse masses of wires that she used to make emergency taxi repairs. 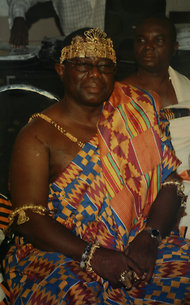 When Mr. Osei went back to driving a taxi, he would occasionally spot Elizabeth at airport taxi stands and chat. Then, when he saw her driving her taxi, he would ask her for her phone number at stop lights. But Elizabeth, who was getting over a previous relationship, demurred.
In 1991, Mr. Osei’s taxi medallion was about to fall into foreclosure, and Elizabeth offered to go into business with him. She borrowed $1,500 from an African grocery store owner and alternated with Mr. Osei driving his Chevy Caprice in 12-hour shifts to help pay off the loan. Soon, Elizabeth decided she was ready to take their friendship beyond a trade-off of taxi keys. In 1995, they wed in New Jersey, had two sons and slowly and steadily built a small taxi empire.
But in 2006, after his brother died of complications related to diabetes, Mr. Osei was called back to Ghana to assume the title of chief. Suddenly, Mr. Osei was being carried on a palanquin, conducting judicial hearings and officiating at festivals. Ms. Osei still laughs when she describes the expression on her husband’s face when he returned from that first trip back to Ghana.
“They spoil you,” Ms. Osei said of her husband’s staff members in Ghana. “When you get to J.F.K., they don’t pick up your suitcases.”
But Ms. Osei seems to have embraced her husband’s responsibilities. At 8 a.m. on a recent day, after a long morning of checking on their taxi fleet, the Oseis sat down in a diner in Midtown and ordered breakfast. Just as Mr. Osei began to eat, his cellphone started to peal with calls from Ghana. While Mr. Osei finished eating, Ms. Osei answered the calls and started relaying the details of work that lay ahead, like funerals, charitable walks and social projects. (The Oseis are especially proud of having installed toilets in some Ghanaian towns.) She seemed to have made peace with the coming journey.
“When I get to Africa, I have to worship him,” she said with a hint of frustration in her voice and a broad, mischievous smile. “When I get back, he has to worship me.”