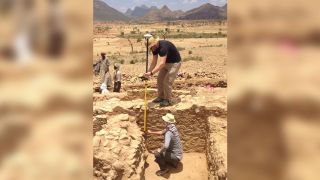 Parts of the buried town of Beta Samati were occupied for more than 1,000 years, from the Pre-Aksumite era around 750 B.C. through the early Christian period from about A.D. 325 until about A.D. 650.
(Image: © Nicole Harrower)

An ancient church from the fourth century, containing both early Christian and what may be pagan artifacts, has been unearthed in a buried town in northern Ethiopia.

The finds shed a rare light on the ancient kingdom of Aksum — a relatively little-known North African civilization that was among the first to convert to Christianity in the fourth century.

Archaeologists discovered the early Christian church, built in the lofty Roman style called a basilica, while excavating the buried town of Beta Samati. The town, whose name means “house of audience” in Ethiopia’s Tigrinya language, formed part of the kingdom centered on the ancient city of Aksum.

Aksum was a regional power from about 80 B.C. until A.D. 825 and a trading partner of Imperial Rome, thanks to its location near the Red Sea on the ancient trade route to India. But its name is unknown to most people today.

“One of the things that we are doing is to try to change that,” said archaeologist Michael Harrower of Johns Hopkins University in Baltimore.

“People broadly recognize ancient Egypt, ancient Greece and Rome … but what they don’t know is that Aksumite civilization was one of the ancient world’s most powerful civilizations, and really one of the earliest,” Harrower told Live Science.

New archaeological research by Harrower and his colleagues, detailing excavations at Beta Samati from 2011 to 2016, is described today (Dec. 10) in the journal Antiquity.

During a German expedition in 1906, scientists had investigated archaeological sites at the Aksumite kingdom, but the unsettled politics of Ethiopia — including a 16-year civil war from the mid-1970s — meant archaeological research has been sporadic since that time, he said.

In the new study, Harrower and his colleagues excavated a high mound called a “tell,” which was formed by the buried ancient buildings. They found that people lived at Beta Samati from around 750 B.C., in what is known as the pre-Aksumite period, until around A.D. 650, when the kingdom began a mysterious decline.

That means the settlement existed during pagan times, through the Christian era and until the beginnings of the nearby Islamic kingdoms, Harrower said.

A key discovery within that tell is the ancient church, thought to be built when the kingdom of Aksum converted to Christianity around the same time that the new religion spread throughout the Roman Empire on the orders of the Emperor Constantine in A.D. 323.

Related: 30 of the World’s Most Valuable Treasures That Are Still Missing

“The basilica that we have found is quite important,” Harrower said. “There have been other fourth-century basilicas that are known, but most of them were discovered a long time ago and some of them just without a lot of artifacts or information to be had.”

In contrast, the early church at Beta Samati holds a trove of ancient artifacts, including early Christian religious artifacts, bronze coins, clay figurines and large pottery amphoras that were used to store either imported wine or olive oil.

“This is telling you that whoever is using this basilica has access to imported luxury trade goods and is quite interconnected into the ancient world and the trade networks,” he said.

Some of the ancient bronze coins from the basilica confirmed its age: A coin from the early reign of Aksum’s fourth-century King Ezana is decorated with a crescent moon symbolic of the southern Arabian god Almaqah, Harrower said.

But coins made after Ezana converted the kingdom to Christianity in about A.D. 325 are decorated instead with a Christian cross, he said.

Other artifacts reveal both the basilica’s Christian purpose and what could be lingering pagan influences, Harrower said.

One of the most striking finds is a black stone pendant, decorated with a Christian cross and the motto “venerable” in Ethiopia’s ancient Ge’ez script. “This is about the size that you could hang around your neck,” he said, “so maybe a priest would have worn this.”

Some other artifacts, of pottery figurines of cattle and the heads of bulls, may be evidence of earlier pagan worship at Beta Samati.

“Probably there is a period of time with a mixing of all the ritual and religious life of people into a more Christian kind of pattern,” he said. “These sorts of finds are really interesting in that sense.”

One of the most valuable artifacts found at Beta Samati, a gold ring inlaid with the semiprecious stone carnelian, also suggests a mix of foreign and local ideas.

While the ring’s design shows influence by Roman techniques, the engraving of a bull’s head and vines on the carnelian inlay is Aksumite, he said: “They are using some of the ideas from the Mediterranean, but turning them in a different way, toward a uniquely African style.”

Harrower and his colleagues plan to return soon to the excavations at Beta Samati, and they hope that the region will become better known through their work.

“We are trying to find ways of encouraging people to go out there,” he said. “There are lots of opportunities to go hiking in the area, and it is a beautiful landscape, with lots of history and interesting things to see,” he said.

London’s temple to Mithras is restored to its ancient Roman glory after 1,800 years