Angelo Soliman, whose real name was Mmadi Make, probably belonged to the Magumi sub-set of the Kanuri ethnic group.[1][2] His original name, Mmadi Make,[3] is linked to a princely class in the Sokoto State in modern Nigeria. He was taken captive as a child and arrived in Marseilles as a slave, eventually transferring to the household of a marchioness in Messina who oversaw his education. Out of affection for another servant in the household, Angelina, he adopted the name Angelo and chose to celebrate September 11, his baptismal day, as his birthday. After repeated requests, he was given as a gift in 1734 to Prince Georg Christian, Prince von Lobkowitz, the imperial governor of Sicily. He became the Prince’s valet and traveling companion, accompanying him on military campaigns throughout Europe and reportedly saving his life on one occasion, a pivotal event responsible for his social ascension. After the death of Prince Lobkowitz, Soliman was taken into the Vienna household of Joseph Wenzel I, Prince of Liechtenstein, eventually rising to chief servant. Later, he became royal tutor of the heir to the Prince, Aloys I.[4][5] On February 6, 1768, he married the noblewoman Magdalena Christiani, a young widow and sister of the French general François Etienne de Kellermann, Duke of Valmy (1770-1835), a marshal of Napoleon Bonaparte.[6]

A cultured man, Soliman was highly respected in the intellectual circles of Vienna and counted as a valued friend by Austrian Emperor Joseph II and Count Franz Moritz von Lacy. In 1783, he joined the Masonic lodge “True Concord” (Zur Wahren Eintracht), whose membership included many of Vienna’s influential artists and scholars of the time, among them the musicians Wolfgang Amadeus Mozart and Joseph Haydn as well the Hungarian poet Ferenc Kazinczy. Lodge records indicate that Soliman and Mozart met on several occasions. It is likely that the character Bassa Selim in Mozart’s opera The Abduction from the Seraglio was based on Soliman.[7] Eventually becoming the Grand Master of that lodge, Soliman helped change its ritual to include scholarly elements. This new Masonic direction rapidly influenced Freemasonic practice throughout Europe.[8] Soliman is still celebrated in Masonic rites as “Father of Pure Masonic Thought”, with his name usually transliterated as “Angelus Solimanus”.[9]

During his lifetime Soliman was regarded as a model of the assimilation and perfectibility of Africans, but after his death he literally became a specimen of the “African race”. Wigger and Klein distinguish four aspects of Soliman – the “royal Moor“, the “noble Moor”, the “physiognomic Moor” and the “mummified Moor”.[10] The first two designations refer to the years prior to his death. The term “royal Moor” designates Soliman in the context of enslaved Moors at European courts, where their skin color marked their inferiority and they figured as status symbols betokening the power and wealth of their owners. Bereft of his ancestry and original culture, Soliman was degraded to an “exotic-oriental sign of his lord’s standing” who was not allowed to live a self-determined existence. The designation “noble Moor” describes Soliman as a former court Moor whose ascent up the social ladder due to his marriage with an aristocratic woman made his emancipation possible. During this time Soliman became a member of the Freemasons and as lodge Grand Master was certainly considered equal to his fellow Masons even though he continued to face a thicket of race and class prejudices.

Beneath the surface appearance of integration lurked Soliman’s remarkable destiny. Though he moved smoothly in high society, the exotic quality ascribed to him was never lost and over the course of his lifetime was transformed into a racial characteristic. The qualities used to categorize Soliman as a “physiognomic Moor” were set forth by pioneering Viennese ethnologists during his lifetime, framed by theories and assumptions concerning the “African race”. He could not escape the taxonomic view that focused on typical racial characteristics, i.e., skin color, hair texture, lip size and nose shape. Neither his social standing nor his membership in the Freemasons could prevent his posthumous exploitation, leading to his ultimate status as the “mummified Moor”.[citation needed]

Instead of receiving a Christian burial, Soliman was – at the request of the director of the Imperial Natural History Collection – skinned, stuffed and made into an exhibit within their cabinet of curiosities.[11][12][13] Decked out in ostrich feathers and glass beads, this mummy was on display until 1806 alongside stuffed animals, transformed from a reputable member of intellectual Viennese society into an exotic specimen. By stripping Soliman of the insignia of his lifetime achievements, ethnologists instrumentalized him as what they imagined to be an exemplary African “savage”. Soliman’s daughter Josefine sought to have his remains returned to the family, but her petitions were in vain. During the October revolution of 1848, the mummy burned. A plaster cast of Soliman’s head made shortly after his death of a stroke in 1796 is still on display in the Rollett Museum in Baden. His grandson was the Austrian writer Eduard von Feuchtersleben.[14]

The story of the “court Moor” Angelo Soliman is part of the mythology of Vienna, not least because of the desecration and preparing of his corpse for the imperial cabinet of natural curiosities. A man who had enjoyed a distinguished career in the enlightened circles of the capital was posthumously displayed in a museum as a half-naked “savage”, adorned with ostrich feathers and shells.

Born around 1721 in sub-Saharan Africa, enslaved as a child, Soliman was sold to a Sicilian family before entering the service of Field Marshal Prince Lobkowitz as personal attendant, soldier and confidant. From 1753 he lived in Vienna, where he played an important role in the household of Prince Liechtenstein: Soliman was chamberlain and tutor to the prince’s children, but he also served as an exotic “showpiece” in courtly ritual. A freemason, he knew Mozart and the preeminent scholars and scientists of the day.

Soliman is the first non-European migrant in Vienna whose life is sufficiently well documented that we can discover something of him personally. Nonetheless, the borders between fact and anecdote remain fluid, and his life can be viewed from varying perspectives: Soliman as mere curiosity or successful immigrant, as eternal slave or rising member of the bourgeoisie, as role model or martyr.

The exhibition also tells the story of how Soliman has been viewed since his death: as part of an idyllic, imperial Vienna; in the novelistic and dramatic imaginations of Musil and Herzmanovsky-Orlando; in the post-colonial critique of the legend of a prominent African-Austrian. Continuing African stereotypes and latent racism are also addressed, bringing the exhibition into our own time. 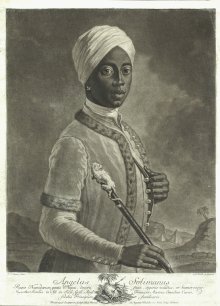 J. G. Haid (after J. N. Steiner): Angelo Soliman, mezzotint, c. 1750   Wien Museum
By Martin Mutschlechner
The fate of Angelo Soliman, who achieved considerable fame as a ‘princely Moor’ in eighteenth-century Vienna, is characteristic of the way ‘Enlightened society’ dealt with the exotic or foreign. In Central Europe black-skinned people were regarded as exotic and ornamental accessories on the extravagant stage set that was Rococo fashion.

Soliman was born in Africa around 1720, and was shipped to Europe by slave-traders as a child. He initially worked as a lackey in various aristocratic households, but soon displayed multiple talents and intellectual abilities which won him favour in high society. Soliman spoke several languages and was considered a brilliant chess-player. In 1753 he entered the household of Prince Joseph Wenzel of Liechtenstein.

In the life of Angelo Soliman there were a number of points of contact with the House of Habsburg. In 1760 Soliman accompanied his employer, Prince Liechtenstein, when the latter travelled to Italy as a proxy for Joseph II, escorting Isabella of Parma, the Emperor’s future bride, to Vienna for the wedding. He is therefore portrayed in the painting recording the bride’s entry into the city, a work that is part of a series depicting the wedding celebrations that still hangs at Schönbrunn. He can be seen striding directly beside the Liechtenstein coach, dressed in a strange oriental costume which was probably intended to emphasize his exotic nature and, despite the high social esteem he enjoyed, to present him as a showpiece.

Soliman was also valued by Joseph II as a highly cultured conversational partner. His intimacy with the Emperor subsequently caused him problems when the latter, through an unintentional indiscretion, betrayed to Soliman’s employer his secret marriage to Magdalena von Kellermann in 1768. The prince, who required absolute obedience of his servants, even regarding their private life, did not forgive Soliman his ‘unauthorized act’ and cast him out.

Despite his established position in Viennese society – he was, for example, a member of the Zur Wahren Eintracht Masonic lodge and thus a brother mason of Mozart’s – after his death his body was acquired by Emperor Franz II (I) for the Imperial-Royal Court Cabinet of Natural History. Despite protests from Soliman’s daughter, his corpse was prepared as an exhibit. The subsequent display, in which Soliman’s mortal remains were exhibited to the public, shows clearly how the person of Soliman, valued during his life as an intellectual, was posthumously degraded as a ‘noble savage’: dressed in a loincloth, feathered crown and necklaces of shells, he stood together with three other stuffed black-skinned humans against a screen painted with a tropical landscape, surrounded by exotic stuffed animals.

In 1848 the mortal remains of Angelo Soliman, which had been so ignominiously abused in this way, were destroyed by a fire ensuing from the hostilities during the October uprising.